It’s hard to see whether US EV maker Mullen is suddenly writhing in its death throes or has come up with a serious plan to change the face of EVs. This week in Europe Mullen said it would begin selling the I-Go, a tiny mini-EV, costing just under €12,000 which it says is focused on last mile deliveries and is ideal given the space constraints found throughout the dense cities of Europe. The I-Go has a range of just 123 miles, when most EVs have focused on getting beyond 300 miles. 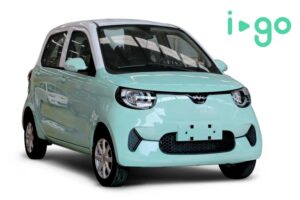 Mullen has stumbled over its own share price of late – it’s fallen from a peak of just under $15 in February 2021 to under 50 cents today. This is because revenues just suddenly hit a wall as the recession bit and its fixed costs and expensive deal-making dragged its losses up over $100 million for a single quarter.

But it turns out that Mullen did not build this car. It is still intent on supplying its Mullen Five Crossover, a machine it will have taken from the drawing board to reality in 36 months if it finally delivers it in Q4 2024. If it lasts that long.

The company’s original idea was to get established manufacturers to partner with the firm and make its cars and it also promised to introduce a brand new lithium ion battery, at a target cost of $100 per kWh, trajectory that’s currently out of reach with lithium ion costs going up, not down, for the past two years.

No-one is currently saying where this I-Go has come from, except it is clearly Chinese, and has a seriously impressive spec. Most EVs, most car brands in fact, start at the top end of the market in low volumes with high profit per vehicle, and slowly work down towards the volume end of the market, where each car is less profitable. But Europe is known for volume sales in this sweet spot, affordable, and best driven containing one, or at most two, people.

The success in China of the Hongguang Mini has shown that smaller EVs may well end up making up the greater part of the EV market. The cheap Hongguang Mini now outsells luxury Tesla cars in China.

The I-Go is set for first deliveries in Europe in Germany next month and then follow up introductions in the UK, Spain, France and Ireland. And it doesn’t look like Mullen had to do too much to gain exclusive European distribution – get the device through the usual hoops of permitting and certification for European roads.

But instead of building its own retail operation Mullen says it is engaged in licensing discussions with potential partners – so that would be every local European car maker and some companies which are not yet in the car business. Most EV subsidies in Europe are above €7,000, so this will make it possible for someone to get their hands on a new EV for a layout of under €5,000.

However this must be a huge distraction for a company management where sales have hit a wall of late, but in the long run it could provide a lifeline. To stimulate sales of the Mullen Five, the company right now is on a tour of the US, demonstrating protypes of its car.

The Company plans on licensing its rights to established dealerships in these desirable European markets. Essentially, this transaction provides the company revenue generating opportunities, promotes and extends the company’s brand into other countries while at the same time allowing the company to remain fully focused on its mission of manufacturing its lineup of electric vehicles in the USA,” said David Michery, CEO and chairman of Mullen Automotive.

This all may seem a touch excessive for a pre-revenue company with 44 employees, especially when it has set up shop as an EV company that can come to market super-fast on far less cash than companies like Tesla, Rivian and Lucid.

Its main plan is to bring out its Mullen Five Crossover in a period of just 36 months from start to finished, making the car available during Q4 2024. The idea was to get established manufacturers to partner the firm and make the car and it also promised to introduce a brand new lithium ion battery, at a target cost of $100 per kWh, at present trajectory that’s out of reach and prices have been going up, not down, for the past two years.

The latest news we have just digested in September is that Mullen has promised to pay what should eventually be $148 million, with $32 million up front, with more held in escrow, to acquire Bollinger motors, another US EV maker.

Bollinger has its own EV designs, an SUV and a pickup and had amassed 50,000 reservations before it began to stutter and said it would pay back the deposits.

So in the US Mullen now has multiple EV designs to choose from, a commitment to the Mullen Five, in the mid-sized luxury market with a car priced at $55,000 for a starting price, similar to Tesla. It also has these commercial vehicle designs from Bollinger and a mini EV for Europe. These are not clear coherent moves, so don’t expect its share price to recover. However the I-Go is certainly one to watch.

The company was only formed in November 2021, when Net Element merged into Mullen Automotive and kept the better known name, and then in June entered into a shares deal with some of its existing investors to raise $275 million of common stock through warrants.

Just last month it completed the purchase of Electric Last Mile – mostly for its factory, but also for IPR and car designs – buying it from the Bankruptcy Court for $55 million plus the assumption of some liabilities.

All of which makes it a neat hodge-podge of assets for any major player to use to leapfrog into EV manufacture – it just must survive with enough cash in its bank to see it through the lull in car sales on both sides of the Atlantic. Who’s to say that the I-Go will not end up as the most valuable of these assets.