A document published this week by the UK National Grid, is almost certainly to be instrumental in pushing the UK government towards a “2 degree” Paris aligned energy strategy – and outlines “no regrets” policy options for the hard of thinking. Essentially it is a paint by numbers “strategy” guideline for whoever is in power as UK Prime Minister.

The National Grid both controls UK transmission and is an energy systems operator, and its Future Energy Scenarios are published as a blueprint of four potentially very different ways for the UK government to regulate energy markets.

But while government sources and the official government advisor “Committee on Climate Change,” both talk in broad brush strokes about rolling out Carbon Capture Usage and Storage (CCUS) and fresh incentives for nuclear power, the National grid document is full of detailed reasoning and careful explanation and specific policy suggestions in a 166 pages document.

It is supposedly split into four distinctly different approaches which it describes as Steady Progression, Consumer Evolution, Community Renewables and Two Degrees, the first two of which are unlikely to get the UK to its Paris agreement goals, and the others two will make it.

Steady Progression is typified by only small amounts of growth in large-scale renewable electricity generation such as offshore wind, a bit of hydrogen blended into the natural gas network, but less than 20% low-carbon heating in homes by 2050, low level of thermal efficiency in homes and a slower uptake of EVs, with their charging points being in public, not at home where they can us demand response to timeshift when they charge. This scenario is pretty much a “do nothing” and it ends up with over 60% of energy demand provided by natural gas, which is imported. It tells anyone taking command of the country NOT to go down this route.

Consumer Evolution is pretty much the same with government stimulus applied to individual consumers generating their own decentralized electricity via solar. Under this scenario a few more people have low-carbon heat in their homes, such as heat pumps, because the energy for it would be cheap. But home efficiency and the take up of EVs would still be low, and gas would still be strong. Demand Response systems would need to be developed by the early 2020s.

You see it’s clever what it’s done here, it has essentially put outcomes and final numbers into the two “failure” options which can be seen as the easy opt outs by government. Instead of leaving these scenarios blank so people could ask, “what if we do little or nothing,” or what if we focus on solar feed-in tariffs? It is explaining what will happen in these scenarios, and providing hard numbers to the amount of zero carbon electricity that would be produced, and what overall emissions would be like. In one of these scenarios there is still a shale gas marketplace, currently hated by consumers.

But then in the last two scenarios, that for Two Degrees and Community Renewables it is more a matter of choice between the control each one gives the government.

Community Renewables is what it says on the tin, allow local communities to grow local projects, so that by 2050 58% of total generation capacity is decentralized, in other words not connected to the transmission network.

It assumes here that this will stimulate an 80% uptake in low-carbon heat solutions – either heat pumps or the use of spare local renewable energy delivered as district heat, perhaps with some biofuel. The energy retailers will be pushing consumers to have high appliance efficiency and this supports a 26% drop in residential heat demand. EVs are dominant by 2035, and home smart charging is used to eat up all the off peak electricity renewables produce. To make this happen, electricity storage capacity rises in the 2030 time frame due to home storage. Local wind power is used and green hydrogen from electrolysis or steam reforming (taking the carbon out of natural gas) can be introduced.

But quite clearly the most attractive is the 2 degrees scenario, which is clearly the preferred option for National Grid supporting strong growth in renewables, but also in a more centralized way, so heavy offshore wind generation up to 6X current levels, and this requires the regional roll out of hydrogen for heat, to over a third of homes by 2050 with many of the rest upgraded to heat pumps. There would need to be central initiatives in both policy to stimulate new home thermal efficiency requirements, and to make it cheap enough to introduce it into older homes.

By then ins this scenario, everyone is driving EVs, with both public and private vehicle charging points and renewables are balanced by even more storage capacity, but more centrally resourced, not sitting around in cars. Natural gas reforming would be introduced, which is well understood, and supported by carbon capture, and this would dominate. It is fairly obvious that electrolysis in the end while be the cheapest way to have Green hydrogen, but reforming is easier to set up in the first instance, this will allow existing gas reserves to be used with minimal extra regulation – keeping fossil fuel groups interested in the energy economy, but with it all being decarbonized. Large vehicles will run on hydrogen – 1 million of them by 2050,

There are further tidbits to be had from reading this report – You “need a heating policy no later than 2025,” which means no new builds to have gas boilers from that date. It means using the car battery as a centralized resource – use any residue in the tank for home functions, but then recharging it when energy is at its cheapest. There would need to be widespread data sharing between the “Gas” economy and the “Electricity” economy, almost as if it was synonymous. It needs a stimulus policy for energy storage now, not later, and a larger role for district heat initiatives, more offshore wind and smaller modular nuclear reactors introduced earlier.

Just which country is going to develop small modular nuclear reactors is unclear – would that be the USA, France or China? If it is China will the UK have to put up with Donald Trump warning against putting your energy supply in the hands of the Chinese government? Post 2025 the can be no Donald Trump after a second term, so I don’t suppose we are worried. But while there is talk of cheaper, smaller nuclear, it comes with its problems and to some extent, this is kicking the can down the road, to solve post 2030, but this is how the national Grid sees baseload issues solved.

Effectively it expects a tiny top up in baseload from nuclear as this diagram for Two Degrees final 2050 energy mix shows, which shows in the rising purple nuclear option providing just under 100 TWh by 2050, getting slightly fatter from 2032 onwards. 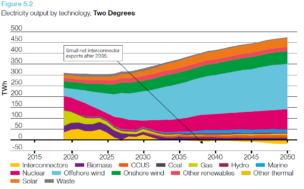