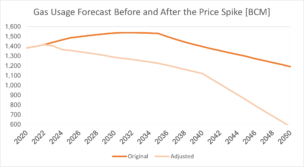 Europe has been left spinning after Russia cut down on natural gas exports and is now searching for alternatives. Falling supply and increased demand caused the price of natural gas to spike up but as a result Rethink predicts that demand will decrease, and the price will adjust accordingly from 2024.

Rethink has just produced a research paper (order it from here) that analyzed the natural gas market based on electricity generation, home heating and industrial uses. Taking into account the readjusted positions of various European governments and their efforts to address the current crisis, the report compares the “what would have been” trend of natural gas with the “what will actually happen” trend as a result of the war.

We thus expect natural gas demand to drastically fall as a direct result of the Russo-Ukrainian conflict despite it being previously on course to gradually increase by 9% usage globally until 2031.

Natural gas usage is expected to shift towards industrial processes until hydrogen will take over while we wait for renewables to scale up and cover electricity demand and home heating.

Before the Russian war we were forecasting a rise of up to 123 BCM (Billion Cubic Meters) per annum of gas between now and 2031 in the top 21 countries, then flat usage through to 2035, before demand finally falls away – in line with decarbonization promises and targets for the major countries.

This won’t be the case though as various European countries are aiming to reduce natural gas consumption by 15% next year and Japan is rebooting its nuclear program precisely because of the high price of natural gas, to name a few examples.

Looking back, it seems foolish that Europe didn’t think to minimize its dependency on Russian natural gas ever since the Crimean Peninsula was invaded in 2014. Eight years later and ties between Moscow and the West are deteriorating once again after the 2022 Russian invasion of Ukraine. While Europe is looking to get unhooked for good from the Russian gas what can we expect from them as the cold months of the year are approaching fast?

In the UK, a shipment of Australian gas has arrived in Kent. The cargo of LNG (liquified natural gas) coming from Australia is the first of its kind in six years.

Figures released by the Office of National Statistics show that fuel imports from Russia fell to zero in June for the first time since records began. Prior the invasion, the UK imported an average of £499 million worth of oil and gas from Russia every month.

The decision to purchase LNG from Australia comes amid a surge in wholesale gas prices that are threatening to keep pushing up energy bills this winter.

In the short term though, Germany looks set to maintain its nuclear power plants operational despite its well-known plans to pull the plug on them by the end of this year. The German energy minister has openly denied this, saying it would only save 2% of the gas Germany buys from Russia, but the rumor persists.

France, usually a net exporter of energy, is now being forced to import in order cover the gap left by natural gas in its energy mix. Nuclear power plants across the country have been left unable to scale up power output recently because of the scorching summer temperatures of August that in turn increased the temperature of the rivers that are supposed to cool down nuclear stations.

The more in-depth analysis of the natural gas market and the effects of the Russo-Ukrainian conflict will be included in the upcoming natural gas market research paper that will predict changes in trends across various sectors like steel and cement manufacturing, electricity generation and home heating.