In the US, when you have a progressive state government and a pair of retrogressive energy suppliers, you have an arm tussle which can drift into the obscure. So this week in North Carolina, where the progressive governor wants to push for 70% emissions cuts by 2030, there is acting out in parallel an insane example of fossil fuel addiction.

A comprehensive paper was produced this week stating the advanced planning for emissions reduction in North Carolina, which will result in immediately concrete actions plus long term policies expected to come into effect in 2021. The document highlights a clear and unambiguous opening of the gates to multiple forms of competition across the energy eco-system, so that local generation options can all be considered and consumers can have a wide array of choices. It will mean upgrading the grid, embracing renewables and putting caps on fossil fuels.

Meanwhile, directly North, across the state line in Virginia, the State Corporation Commission was being asked to make judgement in a case brought by one of the two main energy providers who also happens to operate in North Carolina, Dominion Energy. It is trying to prevent local clean energy companies from being able to sell to the public.

Dominion’s claim is that what its tiny rivals are selling is not really renewable energy, because it requires some imported energy from the grid when the wind is not blowing and the sun does down. In other states an annual average generation figure is used to calculate whether or not you can offer a “100% renewables” package. In others a monthly average load is used and if the clean energy producers make at least that much energy, then they are fine to claim it in adverts. Dominion has introduced the idea that it must be able to produce that much energy every hour – of course making it impossible to sell solar based systems unless mounted with energy storage and even then making them overload on storage. Companies like Walmart and Costco are saying that if this is allowed they will outsource their energy requirements through 100% renewable energy offers – so a lot is at stake.

All the while in both States over 70% of the public want renewable energy and are attracted to such offers. The reason Dominion cannot offer the same is that it has too few renewables resources, because it has had fossil fuel addiction for too long.

Stakeholders were asked which of the reasons for improving renewables were the most important, and their answers were summarized by the graph below, showing they are clearly aware of the importance of carbon reduction.

In the long run the State governments will dictate their energy policy and the energy companies will be dragged kicking and screaming into the 21st century.

The move by North Carolina is not extraordinary in the extent of its support for reducing the effects of climate change, but it is a progressive state which claims second place across the US in solar installations, and yet it gets 90% of its energy from fossil fuels. This, it realizes, has to change.

This is how democracy works – the people vote in the state governments, and can vote them out again, so they take account of public opinion, and stay on top of it. Since privately invested energy companies are not voted in or out, they tend to ignore public opinion until legislation is brought through. It’s slow, but it gets there in the end.

North Carolina now plans a comprehensive study of all the most cost-effective options to achieve a 60% to 70% reduction in CO2 emissions from the power sector by 2030 and plans to accelerate clean energy adoption dramatically and introduce what is effectively a carbon penalty price either via a carbon cap or via direct charges to the two large energy firms.

The other large firm operating in the State is Duke Energy through two a local subsidiaries. This week Duke was in the news (North State Journal) for claiming that solar and wind carry more carbon than coal. It justified this by claiming that when the sun wasn’t shining, solar had to be augmented by gas turbines, that give off particularly noxious emissions (in particular Nitrous Oxide) while in start-up mode. If these peaker plants just operated all the time, there would be less NO2 emissions it argued, and so this is solar ‘s fault. This type of fossil fuel addiction double speak is common among those who are addicted to fossil fuels and who cannot think any other way.  Imagine what a climate change aware public thinks of that company? Not a lot. Perhaps they should ask them?

Dominion and Duke are persisting in building a new gas pipeline, the costs of which they want to charge to customers, meanwhile they resist renewable energy, but passively – in other words they do as little as possible, offer words of support, but sue anyone that wants to compete with them, even though legislation is going through to support such competition. If this pipeline has carbon costs added to it, it may make it non-viable and close the project. That seems to be what the State wants.

The policy scenarios North Carolina is evaluating is a Clean Energy Standard and increasing renewable energy by over 8,500 MW from what is currently expected by 2030, creating up to 18,000 GWh by 2030.

And also scenarios which limit fossils fuel use, which they say will reduce fossil fuels more. And bring down electricity prices further.

North Carolina could go a lot further and it is canvassing opinion on closing all coal plants by 2030 in favor entirely non-emitting sources, so not gas. It may say that a progressively increasing percentage of electricity must come from renewables, and could join the regional Greenhouse Gas initiative which sets an initial CO2 budget, which declines by 2.5% per annum.

It favors accelerating coal retirements and an overall carbon cap, which then indirectly leads to substantial increases in renewable energy generation, which it says in this scenario would likely go to 33,000 GWh or 25% of total generation by 2030. This will reduce CO2 emissions by 68% from 2005 levels it claims.

Another approach it is considering is to require more thorough needs analysis and least cost analysis and justification for any new fossil fuel power plants, and to consider carbon impacts prior to gaining approval to avoid stranded fossil fuel assets in the future. In a way it plans to protect Duke and Dominion from themselves, by getting them to carefully consider whether it is worth buying more fossil fuel driven systems.

North Carolina says its electricity sector has already reduced CO2 emissions by 34% and increased electricity generation from clean resources has risen to 9% of total generation, driven only by market forces and two laws; the Clean Smokestacks Act of 2003 and the Renewable Energy and Energy Efficiency Portfolio Standard of 2007, which created a low level of economic incentive. Now it plans to go further.

This is all going to sound highly familiar to Duke – it has already had to accelerate coal retirements in Idaho, and is also dealing with the fallout from toxic ash that it is required to clean up from coal waste – costing it an amount of money which will seriously affect its profitability for the next five  years. The prospect of having the same happen in North Carolina, and having that brought forward, will add to its stranded asset woes.

Not only will this comprehensive approach to generation hit Duke and Dominion in the stranded asset and clean-up money belt, but the parallel actions to shift to microgrids and to promote Electric Vehicles will also cost it more cash (North Carolina wants 80,000 EVs by 2025, complete with charging infrastructure – something Duke wrote a plan for earlier this year). Of course those new costs may end up being charged to customers,

Duke is experimenting with a microgrid for North Carolina, but so far it is on a tiny scale in Hot Springs, a remote town with a population of about 600 that is served by a feeder with a history of long-duration outages. This was supported with a 2 MW solar array attached to a 4 MW battery storage, and a microgrid controller.

Once lessons are learned from microgrid North Carolina says it will push ahead, dramatically changing its grid architecture and automatically using solar and wind assets for each microgrid alongside with energy storage.

All this could lead to an blueprint to shift to renewables by any State government, which can be copied in other US States which have recalcitrant energy firms, who exhibit signs of advanced fossil fuel addiction.

Finally it wants to create an Apprenticeship scheme for Energy Efficiency across the state to cut down on energy usage, and also take advantage of demand response pricing offers.

The latest plans by North Carolina’s investor owned utilities say that solar will stay as it is, but that energy storage will increase from 1 MW to 246 MW by 2025 and on to 291 MW by 2030. But then again it also suggests that an additional 7,200 MW of natural gas capacity will be part of North Carolina’s portfolio as 4,000 MW of coal capacity is retired. If the State Governor has any say in it, that increase in gas capacity will be priced off the market by a cap or a CO2 price. 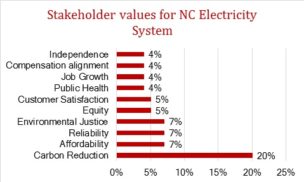