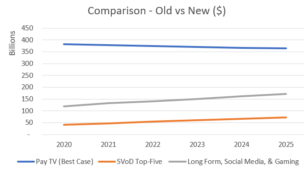 The pay TV world has some new kids on the block to reckon with, and needs to reconcile itself with the fact that it could be heading into its sunset years. A new generation of consumers is emerging that is ever more likely to never take a TV service, and we’re looking at a market that looks set to eventually stray away from even fixed-line broadband and telephony.

But those changes are decades away, at least. For now, in the next five years, we see continued gradual declines in pay TV customers, the expected growth in SVoD services, and the emergence of these new kids – which will greatly upset the advertising industry, as they begin to pivot away from pay TV.

As part of the Operator Database from Faultline’s research arm Rethink TV, pay TV revenue figures are tracked. Combined, that list has over $1 trillion in annual revenue, but when you try to breakout the video revenue alone, a figure of $380 billion per year can be discerned. This is the money that is paid annually in return for television services, to our operators. We can use this as a rough approximate for total pay TV revenue, for illustrative purposes.

Now, if we extend that figure forwards, and give it a very generous decline of 1% annually, we end up at $363 billion per year in 2025 – still a very large industry. However, we are only doing this for a high-level comparison, and as many of our Faultline readers will know, the rate of decline is likely much sharper than 1% per year and likely to slowly accelerate. When we tackle that subject in a fully fleshed out forecast, we will almost certainly witness a much bleaker picture.

But of course, the bottom line on this graph represents salvation, of sorts. This is the result of Rethink TV’s recent SVoD forecast, which examined the fortunes of Amazon, Netflix, Disney+, AT&T (HBO Max), and Comcast (Peacock). These offerings, which stream content that largely stems from the conventional TV and film industry, are a way to stop the loss of viewers from TVs as the primary devices.

For the likes of Comcast, Peacock is a way to keep a customer on a Comcast broadband package, even after they have decided to cancel the TV bundle. It’s also a way for the likes of Comcast to keep the viewers in the habit of watching video on their TVs, so that at some point, they could be coaxed back into a triple play deal. For Netflix, Amazon, and Disney, the TV and film industry keeps churning out the content needed to fuel their SVoD services, even as they try to in-house much of that production themselves. It is quite symbiotic, to a degree.

So while the growth in SVoD that stems from the conventional TV and movie industry does more than offset the losses we see in that pay TV line, what Rethink TV wanted to do with this latest forecast is to quantify ‘the others’ – i.e. long-form video content that does not originate from TV and film studios, that isn’t delivered over pay TV infrastructure, and that is often available freely to viewers.

Defining this sector has been difficult, but what you can see from this graph is that the middle line is trending upwards, growing faster than SVoD, and on track to close the gap with pay TV within a couple of decades. That event could be the end of pay TV as we know it and of course sports rights, as the de-coupling from pay TV could have a huge part to play in that, and Rethink TV has already published a forecast on those.

So, this middle line comprises three main sectors: Long Form online video, Social Media video, and Gaming video. Collectively, for the purposes of this forecast, these are referred to as LSG. Sticking with the definitions outlined above, Long Form represents services like YouTube, Vimeo, and Dailymotion, but does include those that have some subscription tiers, such as Crunchyroll and Voot. Broadly, if you could not find it in a cable TV EPG, is delivered online and is over 30 minutes long, it is likely counted inside Long Form.

The Long Form segment overlaps strongly with AVoD, but the forecast is mindful of China’s influence on the numbers – due to the hybrid fashion in which its FTA options are available inside these platforms. To this end, Tencent Video, iQIYI, Youku, and Le.com are broken out separately, which will be examined separately.

Social Media is fairly self-explanatory, and is an attempt to quantify just how much video is watched across the global social media platforms. The popularity of live video streams, from people to friends and family, as well as from businesses and personalities to their audiences, has surprised many. The length of some of these streams sometimes veers into long-form territory too, and with video still proving the most engaging content on these platforms, the more time spent here by consumers, the less time that is available to spend in the pay TV ecosystem.

Gaming is by far the smallest of the three segments that comprise LSG, but it has the most engaged audience. It also has the fewest players, and as many of you will know, is currently dominated by Amazon’s Twitch. Of course, Microsoft has just turned this sector into a three-horse race, by closing down its Mixer service and pushing its users and streamers towards Facebook Gaming. Google’s YouTube Gaming is the third player here, and while Twitch leads the market currently, its rivals have immense online platforms to leverage, to drive more eyeballs to their gaming services.

Collectively, LSG stands at around $118 billion in annual revenue currently, comprised mostly of advertising revenue, but with a sizeable chunk of subscriptions in there too. In 2025, Rethink TV expects this to have grown to $171.5 billion. This compares to the aforementioned pay TV revenue of $363.5 billion, and the top-five SVoD forecast, which grows to $72.3 billion.

As you can see from the graph above, the LSG growth is not rapid, but it is sustained and shows no signs of slowing – growing by $10 billion per year.