Both New York and New Jersey have outlined their next solicitations for offshore wind, which could see 4.9 GW of capacity added to the US’ renewables portfolio. This state-led approach continues to be the driving force behind offshore wind in the country, which will result in a blossoming of installations from late 2023 and beyond.

The major chunk of 2.5 GW will come from New York, as part of its new solicitation for 4 GW of new renewable capacity in total. It will also be paired with a separate request for proposals for $400 million in port investments, and a requirement that offshore wind generators partner with one of eleven of New York’s qualified ports, from which to base construction, operations and maintenance.

Taking into account the value of avoided carbon emissions, these combined solicitations are expected to deliver $3 billion in net benefits over the 20- to 25-year life of the projects. The remaining 1.5 GW from the solicitation will focus on large-scale, land-based renewables projects, including energy storage projects between 20 MW and 25 MW, or over 100 MW.

New York is currently aiming for 70% of its electricity to come from renewables by 2030, with an additional target to reach 9 GW of offshore wind capacity by 2035 – the most progressive of all US states. Results from this solicitation will add to the 1.7 GW awarded in the state’s first RFP for offshore wind in 2019, which saw contracts awarded to Equinor’s 816 MW Empire Wind Project as well as the 880 MW Sunrise Wind project being developed by Orsted and Eversource, at an average LCOE of $83.36 per MWh.

Despite being awarded contracts, these projects have not yet been fully consented, and still hinge on approval from environmental impact assessments being conducted by the Bureau of Ocean Energy Management, which have been consistently delayed, pushing the expected installation for these projects back to at least 2024.

Of the 2.5 GW of sites available in the second round of solicitation (see below), it’s likely that we could see repeat bids from those that were not successful in 2019 – Vineyard’s 1.2 GW Liberty Wind project and EDF and Shell’s 2.23 GW Atlantic Shore project, although these developers have already started looking to other states for possibly consent. Another project which could be eyed up through the RFP is Equinor’s 1 GW Boardwalk project. In the solicitation, the New York State Energy Research and Development Authority (NYSERDA) has stated that it will accept bids between 400 MW and 2.5 GW.

Very few global offshore wind tenders or solicitations have been undersubscribed since the industry’s inception. If New York fills the desired 2.5 GW, it’s awarded pipeline will be nearly half of that required to meet its installation target by 2035. 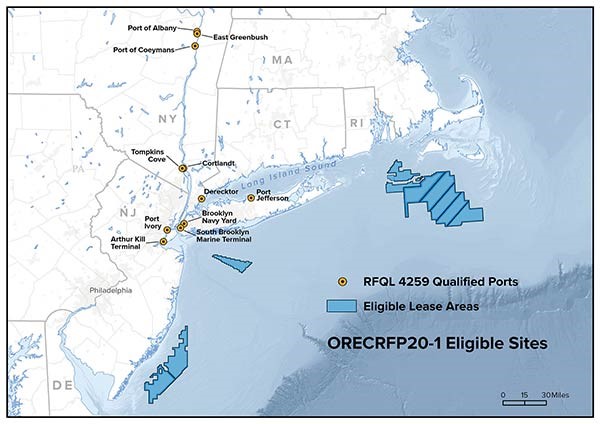 This week we also saw a draft document from New Jersey, detailing its mechanism for a second solicitation for offshore wind in September, which will aim to procure between 1.2 GW and 2.4 GW of capacity. Results of the applications are likely to be issued in December, with awarded projects hoping to be in operation by 2027 and contributing towards the state’s goal of 7,500 MW of offshore wind energy by 2030.

Key projects that are likely to submit applications include the 2,230 MW Atlantic Shores project being proposed by Shell and EDF, as well as the 850 MW Ocean Wind-Plus project as an extension to the 1.1 GW of Orsted’s Ocean Wind project, which was the sole project awarded in the state’s first solicitation in 2019.

The US currently only has 42 MW of offshore wind installed in its waters, after bringing online Orsted’s 12 MW pilot for the 2.6 GW Coastal Virginia Offshore Wind project several weeks ago. However, despite the lack of historic activity, state-led targets now amount to over 25 GW of offshore wind by 2035, with the pipeline of projects in early development now surpassing 23 GW.

Rethink Energy anticipates that the first large scale addition in the US will take place in late 2023, through CIP and Avangrid’s 800 MW Vineyard Wind project, along with smaller contributions from the 130 MW South Fork project and the 12 MW Maine Aqua Ventus project.

This will signal an explosive start to offshore wind in the US, with 1.7 GW of additions set to follow in 2024, before 4.7 GW in 2025. The timeline of many of these early projects however, is dependent on the speed at which the BOEM study is completed, and how quickly the US can prepare its supply chain in the meantime, especially in lieu of appropriate offshore installation vessels and port infrastructure to facilitate a large scale build out of offshore wind.