Ocean Winds aims to become the Orsted of floating wind

Engie and EDP Renováveis have joined forces to create Ocean Winds – a new joint venture which they hope will be able to compete with the likes of Orsted as the market takes off through the 2020s. While there’s a hill to climb to match Orsted’s 12 GW portfolio, Ocean Winds has made a clear statement that floating wind will be at the core of its growth in the sector.

This follows the pair’s announcement back in January to form a 50/50 controlled venture in both fixed and floating wind, which will absorb all of the offshore assets that they have accrued so far.

Many of these assets were already being developed in collaboration, including the Dieppe-Le-Treport and Yeu Noirmoutier offshore wind projects in France, as well as the Moray East and West projects in the UK. EDP Renováveis and Engie are also partners in two floating projects in France and Portugal. But under the umbrella company Ocean Winds, project pipelines will be merged, amounting to 1.5 GW of projects under construction, a further 3.7 GW under development, as well as another 1.2 GW in concept planning.

In announcing the partnership, Ocean Winds also presented a target to have between 5 and 7 GW of capacity in operation or construction by 2025, with an additional 5 to 10 GW under advanced development. The company has stated its intention to target markets in Europe, the USA and selected Asian countries, which will likely include South Korea, India, Japan and Taiwan.

With the company acting as the exclusive investment vehicle for both companies in offshore wind, the aim is to bring Ocean Winds into the top five global offshore wind operators – although the current sum of its current projects brings it just short. 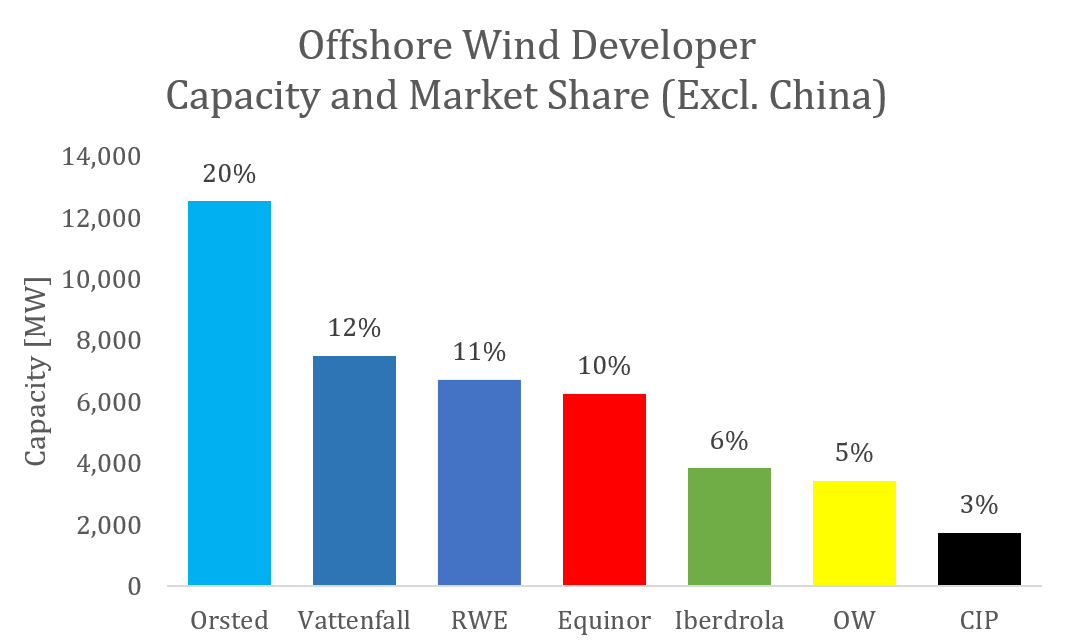 Of the 64 GW of offshore wind in operation or in consented development outside of China, EDP Renováveis and Engie only account for a 5% share, with Orsted racing ahead in the sector since its rebrand from oil company Dong Energy. From the oil sector, Equinor has also made large strides in offshore wind, although largely through collaboration with other players – much of its pipeline is shared with SSE and Polenergia. Vattenfall has also been a fast adopter of offshore as part of a larger push for across the board renewables, while RWE recently had its portfolio bolstered by the acquisition of assets from Innogy and E.On.

Orsted’s lead in the sector has largely come from the fact that offshore wind has been the center of its business, and while it’s now starting to dabble in solar power and onshore wind, it has become the go-to authority in the offshore sector. This seems to be the template that Ocean Winds is adopting: CEO Spyros Martinis explained “Ocean Winds has been created with the intention of combining the experience and knowledge of two companies with a successful track record in the generation of renewable energy under one single firm, in order to take a leading position in the marine wind sector. Engie and EDP Renováveis share a vision for the key role of renewables in general, and offshore in particular, in the new energy model. The creation of a company combining the experience and resources of both parent companies will enable us to lead to the sector in this increasingly real and necessary transition.”

While the company will have a mountain to climb to expand its 5% market share in the offshore wind sector as a whole, its current portfolio accounts for 9% of the equivalent floating sector, where we’ve so far seen limited activity from Orsted and Vattenfall. While Ocean Winds’s approved floating projects only amount to 55 MW of the 588 MW outside of China – both using Principle Power’s WindFloat design – the JV’s future clearly has a bias towards this technology, judging by the assessment work it is undertaking in South Korea and California. Similarly, with headquarters operating out of Madrid, the company will be well positioned to compete for any offshore wind projects off Spain’s Atlantic coast.

Why is Portugal a hotspot for green hydrogen investment?
Calls for Judicial review on tag-along LNG Mozambique deal