Offshore wind turbines accounted for over one-fifth of new wind power capacity in 2021, according to new research from Rethink Energy. While the 19.3 GW of installations through the year may not be repeated in the immediate future, the promise of high capacity factors and plummeting costs will see the technology proliferate into over 20 global markets over the coming decade, pushing installations beyond 265 GW by the end of the decade.

The mammoth 19.3 GW figure for 2021 brings the total global offshore wind capacity to 53.4 GW. Marking a 161% increase in installations from the 7.4 GW installed in 2020, the offshore segment accounted for 21% of new wind power across the world – up from 6% the year before. China accounted for 88% of this, followed by the UK, which added 873 MW – accounting for 5% of total offshore additions. 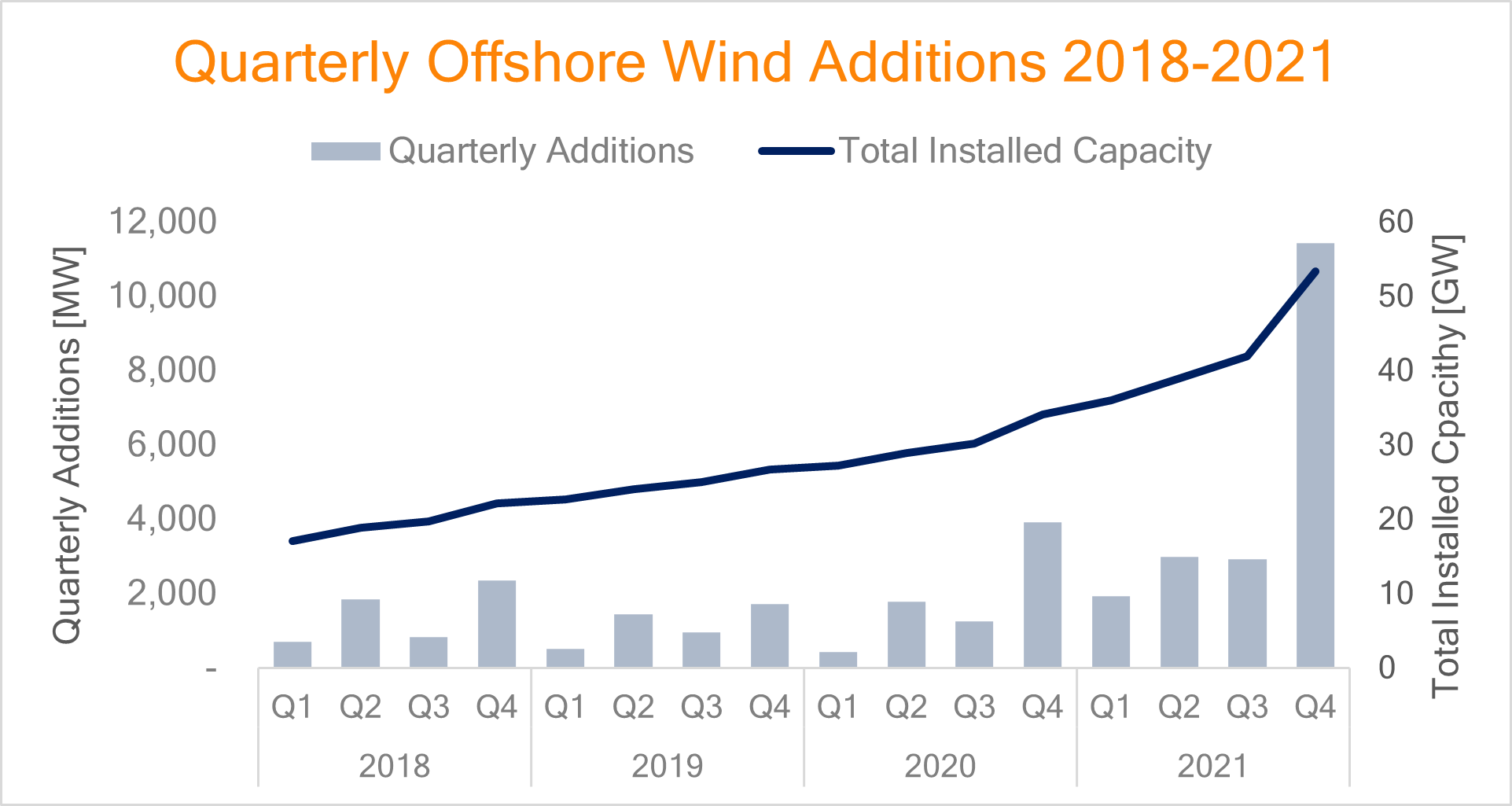 China, having installed 16.9 GW of capacity last year, now dominates the market, with 27.3 GW generating power off its coast. In fact, in the last year alone, China managed to install more offshore wind capacity than the rest of the world has in the past five years combined.

For China, the flurry of activity at the end of the year was a result of developers in the country rushing to get projects online ahead of subsidy deadlines at the end of 2021 – a similar phenomenon to that seen in the onshore sector a year prior. With the subsidy, the owners of offshore wind projects can enjoy around $134 for every MWh of power produced, depending on factors such as water depth, shore distance and foundation type. Without it, the figure that IPPs and utilities are happy to pay is around half of that.

Despite the attempts of companies like State Power Investment Corp, which set up “wind turbine hoisting special commando team” capable of installing an 800 MW wind farm in just one month, as much as 6 GW of the annual installation figure is somewhat speculative. Much of it likely to still be under some sort of construction while partially generating power, with bottlenecks caused by the lack of installation vessels.

But with companies retrofitting offshore oil and gas service boats with cranes for onshore turbines in order to do extra work, China really has had an exceptional year for offshore wind. It has now blown the UK’s market lead out of the water – with the UK sitting on just 11 GW.

It is estimated that China’s 16.9 GW figure was spread across over 50 projects. The UK’s 873 MW of new capacity comes from the Triton Knoll and Kincardine Phase 2 projects, while the Netherlands (751 MW) completed the last three stages of the Borssele offshore wind complex. The remaining global additions come from Denmark (Kriegers Flak, 605 MW), Taiwan (Changhua Demonstrator, 109 MW), and Norway (TetraSpar, 3 MW). The USA also installed its first 12 MW of capacity in over five years through the Coastal Virginia Offshore Wind demonstrator.

Vietnam, which has installed around 1.4 GW of ‘nearshore’ wind has not been included in our figure here, with the installations being far closer in development procedure to onshore projects.

Looking forwards, China is also reported to have the largest share of wind farms under construction, with 8 GW, followed by the UK (3 GW), Taiwan (2.5 GW), and the Netherlands (2.2 GW). Construction works for the first commercial-scale offshore wind farms started in France (976 MW), Japan (140 MW), Norway (88 MW of floating), and Italy (30 MW). Germany, a notable omission from this list, continues to struggle in the wake of disruptions to its regulatory framework back in 2017; it hasn’t installed a single offshore turbine in over two years.

Germany will be back to the offshore wind sector soon enough, along with swathes of new countries looking to establish new generating capacity off their coastlines. Over the next ten years, more than 10 countries – will install their first offshore wind turbines, much of which will be facilitated by the emergence of floating wind to make deeper waters more accessible.

Following a year of 161% growth, it is inevitable that the amount of offshore wind capacity will fall between 2021 and 2022. Falling below 10 GW of annual additions for both 2022 and 2023, Rethink Energy expects the continued industry improvements and cost reductions to see installations ramp up to nearly 16 GW per year from 2025 onwards, with the share of offshore technologies growing steadily from 6% of the total wind power market to 11% – excluding the jump to 21% in 2021.

While China will continue to lead the market, it is actually the UK that still has the biggest pipeline of projects – largely off the back of landmark leasing announcements, including January’s ScotWind Auction, which awarded successful bids for projects totaling 24.8 GW. Overall, the UK has 78.5 GW of projects in the pipeline, followed by Brazil (72.2 GW), China (63.3 GW), the USA (44.6 GW), Japan (39.2 GW), Ireland (28.3 GW), and Australia (25.4 GW). Another ten countries have pipeline exceeding 10 GW, as the world races towards Rethink Energy’s forecast of 265 GW of global capacity by 2030, and nearly 1,400 GW by 2050.