Offshore wind targets will be missed before installation rush of 2030s 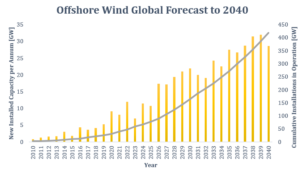 Anyone reading today’s trade publications cannot be surprised that the offshore wind industry is poised for dramatic growth in the coming two decades. But the 30-year-old industry will take on the kind of kudos usually reserved for Silicon Valley and the telecoms industry – driving the creation of 8 million jobs globally, and attracting $1.3 billion of cumulative investment which will lead to the build out of over 400 GW of electricity generating capacity by 2040.

This vision comes from Rethink Energy’s latest forecast entitled, “Offshore wind to drive 8m jobs, is key to decarbonization,” a comprehensive global study on the technology and key drivers behind a market which shows no signs of slowing down in run up to 2040.

Rethink Energy predicts that by 2030, the global offshore wind capacity will have risen from 25 GW today to 164 GW, before kicking on again as floating wind turbines emerge as a separate extra market during the 2030s. This will drive annual offshore wind installations towards 30 GW a year, leaving the world with 418 GW of wind energy by 2040, providing almost 5% of global electricity.

While currently led by Europe, the Asia-Pacific region (including China) is set to become the largest market within the next 20 years, with the US lagging way behind due to its conflicting politics, as well as its lack of maritime and transmission readiness. China will overtake the UK as the world leader in terms of installed capacity in 2026, when it will be responsible for over half of the offshore wind capacity in the Asia Pacific region and nearly a quarter globally.

The study addresses the global forecast through a territory by territory assessment of each contributing nation, with a detailed analysis provided for the top 10 in terms of installed capacity by 2040. This includes considerations regarding investment readiness, the likely loosening of regulations, and the inevitable ramping up of transmission connections that will be required; a challenge which will be more difficult in some countries than others.

Following a global reform within transmission, the wind power industry will shift its focus offshore in many regions. While the global supply chain for offshore wind will benefit from the experience and scale of the onshore wind industry, regions like South Korea and the US will be limited in expansion due to a scarcity in maritime resources, especially seaworthy installation and maintenance craft. This will particularly limit the US, and the ambitious build out targets of individual states are likely to be missed.

In fact, in the near-term, most regions of the world have over-promised on offshore wind. However, later in the 2020s there will be a second coming, as more and more floating wind turbines as added to the mix, driving a growth in offshore wind greater than many analysts expect.

This will be facilitated by the falling LCOE of floating wind through the 2020s, to a competitive level between 2028 and 2030. This cost reduction will be partially achieved through the continued consolidation of global turbine makers, and of floating platforms once floating wind enter the fray at scale. However environmental issues will plague the steadfast emergence of this massive industry, and act like a lead weight around its immediate progress.