Ahead of its annual results for 2020, renewable energy developer Orsted has stated expectations that it will beat its earnings guidance for the year. However, despite strong operations, revenue is set to fall through 2021. The company’s dependence on offshore wind exposes volatility with wind speeds, which were exceptionally high in 2020. This is likely to be a core driver behind Orsted’s ambitions to continue its diversification into new geographical and technology markets.

The figures Orsted released this week indicate that it is on course to post an operating profit of €2.4 billion in its financial records for 2020, when they are released on February 3. This pushes past the company’s latest guidance figures of between €2.2 billion and €2.3 billion, which it released in Q1 2020 and has upheld ever since, even in spite of Covid-19.

The company, which holds the title of the world’s largest offshore wind developer, did, however, state that this better-than-expected performance was “primarily of a temporary nature.”

Some of the result can be pinned on the “strong operational performance throughout the group” in the final quarter of 2020. The company managed to hedge some of its power exposures through energy trading, and has benefited from natural gas prices rising at the end of the year. The company also claims that fixed costs were lower than expected, with delays to project development expenditure in several US projects, as environmental impact assessments were extended.

However, the primary boost has come from the exceptional wind speeds seen through the year, which have resulted in a greater generational output from many of Orsted’s operational wind farms. In the UK for example, where Orsted has 12 projects in operation worth 4.9 GW of capacity, stormy weather saw average wind speeds rise from 8.1 knots for the first eleven months of 2019, to 9.1 knots for the same period in 2020. In the company’s Q3 results, offshore turbine generation was up 29% compared to the year before, despite capacity only rising by 15%. 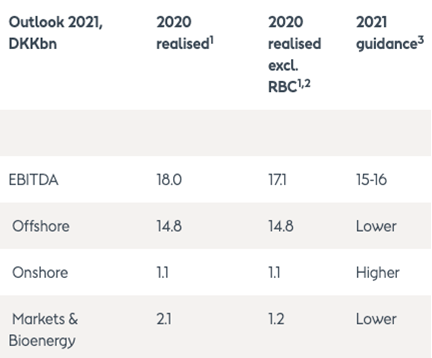 Naturally, Orsted cannot rely on this for sustainable profit, and has therefore posted a more modest guidance expectation for 2021, with operating profit falling between €2.0 billion and €2.2 billion. Much of this dip will come from the company’s offshore wind segment, which accounted for more than 80% of its earnings in 2020. The largest contributor will be the drop in wind speeds, which are statistically likely to fall closer to average levels next year.

It is worth noting, however, that despite a trend of ‘global stilling’ for wind speeds leading up to 2010, a publication in Nature recently pointed to their recovery since then, at a rate of 0.47 knots a decade.

Project development costs will also rise for Orsted in 2021, as the company cracks on with the development of the 900 MW Greater Changhua 1&2a project in Taiwan and the 1.4 GW Hornsea 2 project in the UK, both of which are set to enter operation in 2022. Earnings from the 209 MW Horns Rev 2 installation in Denmark will also fall after the project fell out of subsidy eligibility in October 2020. Transmission costs are also expected to increase for projects in earlier stages of development.

This could see earnings from offshore wind fall as low as €1.6 billion – which would be the lowest the company has seen in five years, despite the company doubling its installed capacity in this timeframe.

For Orsted, this may signal the end of a golden age for its offshore wind profits, at least until costs can fall further. Horns Rev 2 received a tariff of around €70 per MWh, and while most of Orsted’s wind projects still receive generous state subsidies, their rates are falling. Borkum Riffgrund 1 in Germany, for instance, will receive a subsidy of €194 MWh for several years to come, having been installed in 2015, while Hornsea 2 in the UK will receive less than a third of that when it comes online in 2022. In 2025, Borkum Riffgrund 3 will receive no direct subsidies at all.

While technology costs will fall significantly through this period, the room for profit will be squeezed tighter and tighter, as governments come to expect the low renewable energy prices that have become commonplace within onshore wind and solar power.

The way companies have got round this so far is through signing PPAs to guarantee a price for any power generated. Orsted for example recently signed the largest ever renewable corporate power purchase agreement with TSMC in Taiwan, which will offtake the full generation from the 920MW Greater Changhua 2b & 4 offshore wind farm.

But this model is starting to become outdated. While heavy-consumption companies look to decarbonize their power supply, this model hinges on the assumption that electricity prices will be fairly stable, or even increasing, from the time at which the PPA is signed. It’s becoming increasingly apparent that prices of electricity will fall, so interest in signing PPAs could start to fall-off in coming years, forcing offshore wind developers closer to the wholesale power market.

One of the key avenues that is being explored by project owners, in Europe in particular, is that of green hydrogen: if we’re going to have to give this electricity away for pittance, why not use it to produce green hydrogen and make a profit from that instead? Among many projects that Orsted is involved in is a partnership with nine others to develop the Westkuste 100 project in Germany, which has just been identified as eligible for public funding.

The one corner of the company’s business which is set to become more profitable in 2021 is that of onshore renewables, as the company continues its expansion into the onshore wind and solar sectors, while exploring pilot projects in the nascent hydrogen market. Orsted will also look to ‘farm down’ its 294 MW Muscle Shoals solar project in Alabama, following its commissioning in Q3 2021.

Other signs that Orsted is looking to further boost its solar credentials include the rumors that it is among the list of companies eying German developer Ib Vogt for a potential takeover. A price tag of around $419 million has been attached to the company and its 16 GW solar pipeline. Ib Vogt has so far built 1.53 GW of PV capacity, with 826 MW still under its operations and maintenance.

Orsted has also continued to put more focus on its onshore wind business, having recently acquired the 298 MW Haystack Wind project in Nebraska, USA, which is adjacent to its recently completed 230 MW Plum Creek wind project. The company has also recently completed the 103 MW Willow Creek wind farm in South Dakota and is now turning its attention to the 367 MW Western Trail Wind project, after a final investment decision was reached in recent weeks. The latter is set to enter full operation during 2021.

The company recently completed the divestment of its liquefied natural gas business, with the segment being sold to Glencore. With recent plays also including electricity purchasing for 40% of the power output from the first two stages of Equinor and SSE’s 3.6 GW Dogger Bank Wind Farm, Orsted appears to be transitioning towards a more utility-based business model, which would fall in line with its onshore renewables plays.

One further way for Orsted to protect itself from wind fluctuations is to expand its offshore wind portfolio geographically, avoiding the impact of localized storms. Taiwan currently appears at the forefront of the company’s mind, having this week tapped ten suppliers in the country to supply components for Orsted’s upcoming projects in the country.

The new guidance does not include earnings from new partnerships, including through the sale of 50% of Greater Changhua 1 in December to CDPQ, with timings and the distribution of income yet to be decided.

Part of Orsted’s shift away from offshore wind could be seen through the plan to ‘farm-down’ 50% of the 752 MW Borssele 1&2 wind farm in the Netherlands in the summer of 2021. New partnerships provided around €220 million of Orsted’s earnings in 2020, but these are set to provide much less income going forward.

Earnings from Orsted’s Markets and Bioenergy segment are also expected to fall in 2021, as the increase in price of gas in storage in Q4 2020, looks set to recede. 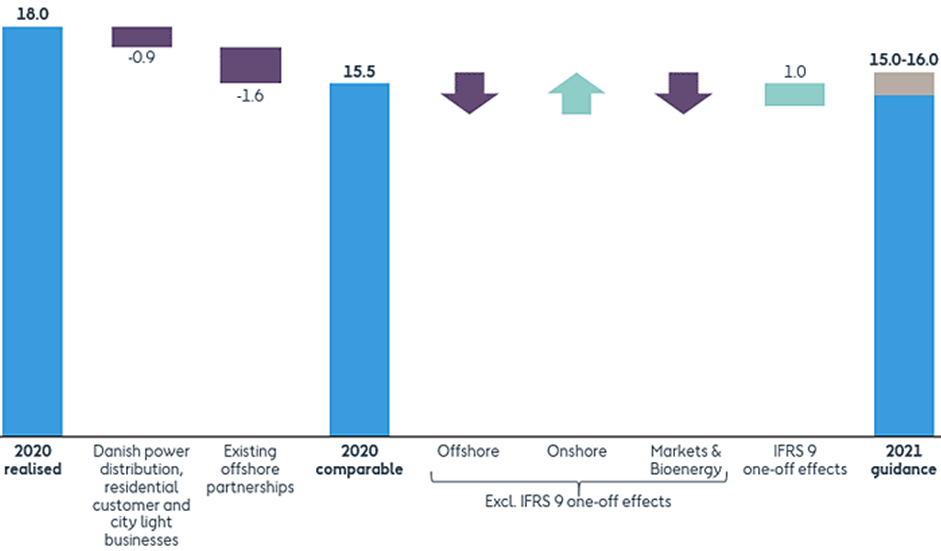