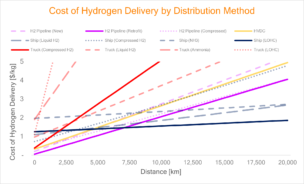 The future of hydrogen trade will be dominated by pipelines and liquid organic hydrogen carriers, according to new research from Rethink Energy. As the sector emerges out of its infancy, obsessed with raw production costs, it is the innovative approaches to moving hydrogen from supply to demand that will play a larger role in dictating the final price for the customer.

Importing hydrogen to resource-rich countries will add between $0.50 and $1.86 per kilogram, depending on the distance and the means through which it can be transported. With distribution accounting for nearly two-thirds of the final cost of hydrogen to the customer, these delivery mechanisms will dictate competition throughout the hydrogen market.

The logic behind this is laid out in our new Hydrogen research paper out next week, titled Pipelines and hydrogen ships to dominate H2 distribution.

By 2050, Rethink Energy has forecast that 735 million tons of green hydrogen will be produced each year, using renewable energy to power electrolysis technologies. Spanning from use in aviation to steelmaking, the use of hydrogen to decarbonize new industries will be central to the economic shift away from fossil fuel producers towards those harnessing their own wind, solar, and hydropower resources.

The trade routes that have long defined the global energy map will have to be redrawn. Energy – both as hydrogen and electricity – will need new infrastructure focused on low-cost storage, distribution, and delivery.

The $1.40 per kilogram disparity between these two opens a huge argument for countries like Germany to import hydrogen, rather than to produce it domestically.

Over distances of up to 5,000 kilometers, as shown by the limited hydrogen industry that is already in operation, pipelines are likely to provide the most cost-effective means of delivery. Since the 1930s, and as demonstrated by the 2,500 kilometers of hydrogen pipeline in the USA, short length and low-pressure pipelines have been owned by merchant producers linking site-based production of hydrogen with the industrial facilities they serve.

As the hydrogen economy emergences, and as hydrogen hubs and valleys aggregate industrial activity with renewable energy, these pipelines – with their long lifecycles and low operational costs – will continue to be cost effective. Using compression to deliver hydrogen at greater densities and volumes, pipeline delivery over a 1,000-kilometer distance will cost just $0.54 per kilogram.

The economics of such hydrogen pipelines will be significantly boosted if – rather than building them from scratch – existing natural gas pipelines can be safely repurposed for future hydrogen networks. With modern gas infrastructure requiring simple changes to hardware (valves, compressors, etc.), such an approach could add to the capital requirement by up to 45%.

But as distances get further, the large capital cost and lack of flexibility of a pipeline are limiting. Once beyond 7,000 kilometers, the ability to transport hydrogen onboard ships becomes more cost effective – adding around $1.45 per kilogram of hydrogen over this range.

Shipping hydrogen as a gas is hugely inefficient. Vessels with storage tanks of around 160,000 cubic meters, only around 13 tons of hydrogen can be carried onboard; very little if the vessel’s round trip takes more than one month.

However, if hydrogen can be carried as a liquid – at extremely low temperatures, as a constituent part of ammonia (NH3), or as other liquid organic hydrogen carriers (LOHCs) – up to 19,000 tons can be carried by the same amount of storage capacity. These technologies, in a similar manner to truck-based distribution, also offer flexibility in trading in terms of routes travelled and volumes distributed.

The cost of these approaches will depend on how efficiently hydrogen can be ‘packed’ and ‘unpacked’ from its respective carrier.

LOHCs – with reduced packing costs – come in at between $1.48 and $1.86 per kilogram over distance of between 7,000 and 20,000 kilometers. Ammonia, despite being the densest carrier of hydrogen, is severely limited by the cost of cracking it into its pure hydrogen for consumption (approximately $1.4 per kilogram on average).

The cost of hydrogen distribution is agnostic as to technology used to produce the hydrogen itself. But as the market grows and shifts away from ‘grey’ hydrogen, produced using natural gas, towards renewable ‘green’ hydrogen, transnational trade agreements are already being sought to secure the fuel at the lowest cost possible.

Germany, for example, has already signed partnerships with countries including Canada, Chile, and the UAE, and has set up the $1 billion H2Global initiative aiming to subsidize the production of green hydrogen in non-EU countries for import. Similar agreements have been signed for a ‘liquid hydrogen supply chain’ between producers in Australia with users in Japan, while the EU’s Hydrogen Strategy, as announced last year, outlines an aim to see 40 GW of electrolyzers installed in its neighbouring non-EU countries by 2030, on top of 40 GW from within the bloc itself.

Countries across the world will need to work out whether or not it will be cheaper to produce hydrogen themselves or import it from countries that can produce it with a greater abundance of low-cost renewables. As exposed through Russia’s weaponization of the natural gas market, the security of these supplies, and the geopolitical environment surrounding them, will also be a key factor.

Companies relying on hydrogen for their net-zero efforts will also need to weigh the options of securing hydrogen that has been produced and delivered from thousands of miles away. Should they relocate manufacturing facilities to locations where hydrogen can be produced on-site?

These considerations highlight the importance of securing in-depth analysis of the future production, demand, and future trade of green hydrogen. With huge amounts of capital at risk in the investment of the associated infrastructure, it is vital that stakeholders identify how hydrogen can be secured at the lowest possible price, with both production and distribution accounted for.