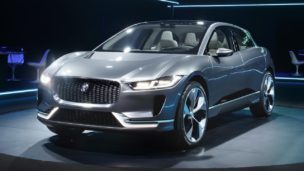 Jaguar Land Rover has stumbled this week in its production of the electric I-Pace SUV, with battery supplier LG Chem falling short of demand. Production will grind to a halt – for next week at least – and while Jaguar will recover from this slip, supply shortage is continuing to be a worrying sign as demand for zero-carbon vehicles continues to ramp up.

This issue is a product of the fact that while the car-making industry is mature, clean motors are not. With new entrants to the market starting to focus on hydrogen fuel cells, both technologies are set to face the same sort of problems in terms of scalability. Locking down sections of the supply chain will therefore be key to establishing a strong market share.

The I-Pace is far from the first example of battery makers causing hiccups in production. In 2017, Hyundai fell behind its order book for its loniq EV, again with LG Chem as the supplier. In fact, last year LG Chem was also responsible for reduced delivery volumes of Audi’s E-Tron and Mercedes-Benz’s EQC.

Access to batteries is fast becoming the new battleground for car makers, although companies like Jaguar have been surprisingly reserved in signing binding contracts with suppliers ahead of production. Sam Jaffe MD at Cairn Energy Research Advisors has speculated that “Either they are facing internal pressures to avoid a too-successful EV launch (which could cannibalize pre-existing model sales and anger their dealer networks), or they’re just bad at strategy.”

This is an eerily similar tactic to that used by energy utilities which have been reluctant to ramp up renewables efforts and veer away from fossil fuels, and have faced stunted growth because of it. It’s easy to draw parallels in growth between progressive utilities like Enel and progressive car-makers like VW, which has entered a $56 billion battery agreement with Samsung to provide 5 GWh worth of batteries, or Tesla through its deal with Panasonic, with both companies less dependent on supply from companies like LG Chem and CATL.

This power supply issue will become one of the largest bottlenecks in the production capacity growth of clean transport, with hydrogen fuel cells also stunted by both the abundance of refueling stations as well as the production of hydrogen itself.

Last week we talked about GMC’s revival of the Hummer brand as an electric truck to take on Tesla, but now it’s got more company, with Nikola’s new Badger electric truck released this week. The Badger will be available as either a purely electric vehicle or with a hydrogen fuel-cell system which would double its range. The expected specs will be competitive with others, and the offering of hydrogen will alleviate some range anxiety if consumers are confident that they can simply stop anywhere to refuel.

The problem is that they can’t, and Nikola will face similar, and probably more acute problems with power supply during early development. Even in areas with relatively high numbers of hydrogen stations like South California, car owners complain about how few-and-far-between refueling locations are. Nikola plans to build 700 of these filling stations, and will announce their locations in Q1 2020, but this won’t go far given the potential growth of the market.

Pickups are currently receiving the most hype within the clean-transport market, but drivers continue to emerge for the growth of the sector as a whole. Last week the UK brought forward its ban on new diesel, petrol and hybrid vehicles to 2035, leaving a void for EVs and fuel cells to fill in a nearer timeframe than expected.

Scaling up production capacity of vehicles however will not be the sole focus of the industry. A recent study from the University of Birmingham has highlighted that current recycling measures are insufficient to deal with end-of-life lithium ion batteries, with 250,000 tons of waste attributed per million vehicles sold.