Late last year we interviewed Asegun Henry, CEO of the Thermal Battery Corporation (TBC), a start-up out of MIT and Georgia Tech US universities, pursuing a truly unique form of thermal energy storage. The system’s conversion efficiency is 50%.

The power input for TBC will simply come from the grid while output will go through thermophotovoltaic cells exposed to radiation from graphite heated to thousands of degrees Celsius. These cells ‘only’ have a little over 40% efficiency, but the light they fail to capture takes the form of heat – some of which rejoins the thermal storage and thus isn’t a loss of energy from the system. 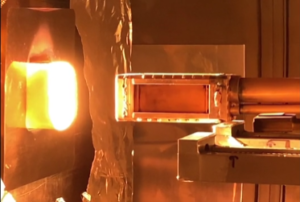 Most of the energy loss that occurs is through thermalization of this radiation – the light not captured in the tandem cell’s bandgaps – which is then sapped off through the cooling system that prevents the thermophotovoltaic cells from melting.

“Eventually we will build 1 GWh systems for between $10 million and $40 million.” states Henry. “The range there depends on how rapid the charge and discharge will be, but that’s my guess.” It definitely won’t happen this decade – TBC has a solid base of research, but is now designing a 1 MW pilot line which will take 3 years, and has grown to ten employees, all engineers. But Henry’s claim that he can make storage 30 times cheaper than lithium-ion can’t be dismissed outright, once you dig into the logic of the system.

This design is made possible by an apparently unrivalled level of technological expertise at one very difficult task – pumping liquid metal. Using liquid metal as a heat transfer fluid enables very, very high temperatures, which in turn enables higher efficiency for the transformation back into useful energy. Where supercritical turbines operate at under 600 degrees Celsius and ultra-supercritical operates at under 800 degrees, and 3rd-gen CSP start-ups work toward making concrete at 1,000 or 1,500 degrees – TBC goes all the way to 2,400 degrees Celsius. “We’ve done something that previously engineers thought was literally impossible,” says Henry.

For ordinary thermal storage systems relying on turbines, the only angle to compete with batteries is long-duration, as well as supplying heat for residential or industrial use. They’re relying on the categorical difference between thermal and battery storage, which brings the cheapness of the storage medium. Molten salt is a lot cheaper than batteries.

When that typical contrast between thermal and battery storage is put to Henry, he totally disagrees that it applies to TBC’s concept. “One of the key selling points to our technology is we’re not just limited to long duration. We can do 1-hour, 10-hour, 100-hours.”

Even so, batteries will surely dominate the scene too much to be pushed out of the 1-hour category, by the time TBC systems are available. They’ll also have some grid service types to themselves – the TBC response time of several seconds doesn’t cover everything.

As for the waste heat from the cooling system, that could be sold and used – but that’s an issue for many kinds of power plants, irregardless of TBC’s particular research.

The second unusual part of TBC’s concept is the use of thermophotovoltaic cells, which are III-V tandems with 40% efficiency, comparable to those on satellites. At least one other start-up, Antora Energy, is planning to use these, in Antora’s case with temperatures of up to 1,500 degrees stored in carbon. Both Antora and TBC come from a similar American milieu featuring NREL. It’s the pumped metal expertise which is TBC’s truly unique point.

Pumping liquid metal is mostly done in the metals casting industry. The other major application is for coolant in the type of nuclear reactor called Liquid Metal Coolant (LMR), in which the higher thermal conductivity allows for stronger cooling and more intense energy generation. This technology allowed the Soviet Union’s Alpha Class submarines to achieve very high speeds.

Thermal Battery Corporation’s pumped metal efforts are quite different of course, having gradually ascended to temperatures far beyond what’s needed or even useful in existing applications. As Henry observes, “They [the metals casting industry] just need it to be above the melting point so it’ll flow, we’re using it for energy transport, which means there’s a lot of value to having it as hot as possible from a thermodynamic perspective.”

Henry’s research team has been setting and then beating its own records for several years now – in 2017 it was ‘only’ at 1,500 degrees. “When you go superhot, the materials of the pump need to change, and the pump’s dimensions may change as they heat. Rotating mechanical components can misalign, which would destroy the pump. But the biggest challenge is corrosion – usually there will be some kind of chemical reaction with the metal being pumped at these temperatures.”

Henry continues, “Ten years ago, the typical way you would approach this was here’s the metal, here’s how a pump works, now tell the materials scientist to figure out how it works. That’s too big a challenge – what we have is a materials selection problem. So we had to take the opposite approach, asking which materials would be thermodynamically stable in contact with each other, no corrosion, then tell the mechanical engineer to figure out how to make a pump out of those materials, a pump that survives when it’s glowing white-hot.”

Previous forms of the TBC design, around five years ago, had molten silicon as the storage medium, perhaps with iron added to lower costs. TBC has now adopted solid graphite as the storage, and liquid tin as the heat transfer fluid.

Ten years ago pumping metal was university research, with about three or four pivots on what the end use was going to be. “Many start-up companies decide what to do and pivot, we’re pretty settled on this.” Asked about the previous applications he’d considered, Henry replies, “The original use was going to be a thermochemical reactor for 2-step metal redox cycles using metal oxides as a way to split water into hydrogen and oxygen, powered by sunlight.” Henry continues, “The liquid metal came in as a means to separate those two processes – the first process is to convert sunlight to heat, the second is to provide heat to the thermochemical reactor. For that we needed 1,500 degrees Celsius, the core new thing we wanted to demonstrate.”

The second plan came after the materials needed were found to be too expensive under the understanding at that point in time and a practical limitation of 35% was run into with the hydrogen process. “Then the question became, if you can pump liquid metal, why not go straight from sunlight to heat to electricity, without the hydrogen intermediate?” So the plan was to make a liquid-metal based version of CSP, with 60% efficiency through a combined-cycle turbine system.

The next pivot came with the realisation that the turbine for such a high temperature system doesn’t exist. “It’s not that it can’t exist, it just doesn’t, nobody needs it. As a lowly academic I wasn’t going to persuade Siemens to invest $100 million developing it.” So then the plan was CSP combined with photovoltaics – “But then we realised there’s another hard problem, we needed a window to block oxygen and prevent oxidization, but the window would melt.”

The last pivot was ditching the CSP in favour of using ordinary photovoltaics to collect power and storing their energy thermally, then the final switch was to replace the turbine as the means of power output, with the thermophotovoltaics. So this is an idea born out of CSP, but ending up with a totally different power source. “We can store solar, wind, nuclear, we couldn’t care less where the energy comes from.”

Once thermal batteries became the intended use, the big question was how to convert the heat to useful energy. Reaching super-high temperatures doesn’t merely reduce the entropy of the thermal energy and make it easier to pump, “It also makes radiation the main form of heat transfer. In which case, it makes sense for the method of converting heat based on radiation. So instead of the usual turbine, we decided on photovoltaics.”

The thermophotovoltaic cells will be on par with the best single turbines with expected improvements to efficiency taking them to beyond the current 41%. A two-turbine system like that which Henry mentioned earlier can get to 60%, but the thermophotovoltaics will be lower cost, Henry expects, and calls it a big selling point.

Henry was “enamoured” with CSP “for many years” but eventually quit, and now sees CSP as inevitably niche, which it is. The interesting part of CSP is the storage, and that’s what the TBC design has stuck with, and with a very different output method. As Henry points out – “Solar panels are cheaper than heliostats!” A heliostat is a lot more than a mirror, while photovoltaics are ever cheaper. And Henry doesn’t believe that the rest of the CSP industry can follow him into being “storage only.”

Asked about the safety of pumping liquid tin around at 2,400 degrees, Henry responds, “Each of you has seen or held an object that hot – the incandescent lightbulb. If it breaks, the filament goes out. With our system, if it breaks, the filament goes out, it’s not going to explode. It’s just that our ‘filament’ will sit there taking months to cool down.” Henry also mentions gas canisters, pressurized to 1,000 atmospheres, handled as part of everyday life – “Those are bombs. That’s pressure. We only have temperature, not pressure.”

Asked about Heliogen, the highest-profile 3rd-gen CSP company, Henry said he views co-operation as unlikely – because Heliogen is using air as its heat transfer fluid, while TBC must strictly exclude reactive, corrosive oxygen.

In the coming decades the main challenge for a 100% renewable grid will be transmission and storage, with the cost of solar and wind generation being relatively trivial. It will be entirely viable to buy 5 units of energy at midday even if these can only be converted to 2 units of output – especially once the gas peakers are gone. Batteries do it better within a given day, but renewable intermittency can act across days or even weeks. Thermal storage already has a valid place in deserts, in the form of 2nd-gen CSP, with a smattering of 100 MW projects planned across the world and 4 GW to be built in China. Beyond that, even cloudy Chinese coastal provinces, as well as some organizations in Europe’s North Sea, are planning molten salt thermal storage that’s powered from the grid with renewables. Thermal storage may be only a small or medium-sized component of the 2040 or 2050 grid, but it won’t be entirely absent.