Ask and you shall receive.

Six weeks ago, Faultline piled pressure on RDK Management – proposing that the group was stalling on supporting EasyMesh as a feature of RDK-B, a year after the WiFi Alliance’s mesh standard was added to the RDK-B roadmap.

We observed how tier 1 operators and WiFi technology vendors alike have been showing signs of being ready to embrace EasyMesh within next-generation router software stacks, yet there were no signs from the RDK camp of EasyMesh integration being in motion, until now.

The radio silence has been ended by Turkish WiFi management specialist Airties, which has contributed its WiFi EasyMesh controller software module as a new component for use by the RDK community across broadband gateways.

The first is that most operators will eventually standardize on EasyMesh APIs anyway, so you might as well embrace it, as a translator for WiFi components and access points (APs) to create a common framework within a mesh WiFi architecture.

In turn, this means shrinking demand for proprietary mesh architectures, like Airties’ own, and more room for controller-initiated steering, cloud-based channel management, and cloud-based diagnostics collection. 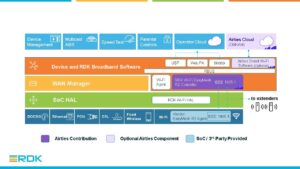 The controller can support any certified WiFi EasyMesh device.

Within the core functionality of the new RDK-B component, contributed by Airties, you will find support for onboarding WiFi EasyMesh agents on gateways and extenders; setting up in-home backhaul connections; propagating fronthaul configuration changes; and collecting statistics periodically. Furthermore, a pending enhancement will expose configurations and device state via the common RDK message bus (RBus).

Looking long-term, what is arguably more significant here, as we gaze into our crystal ball, is the issue of fixed-mobile network convergence. Tier 1 European operators Deutsche Telekom, Vodafone, and BT have recently declared their support for an open source objective to provide a production grade 5G stack capable of integration with RDK-B and OpenWrt frameworks. OpenWrt is an open source project for embedded operating systems on wireless routers, based on Linux.

With growing interest among operators in developing a common stack to facilitate consolidation of core and aggregation networks, this has led to the development of an open source standard called WWC Reference Implementation for 5G-RG (residential gateways), designed to allow fixed and mobile services to be consolidated over a common core.

With Airties in the process of being acquired by private equity firm Providence Partners, we deliberated last week how the company’s future could hinge on appealing more to the mobile guys. Faultline is currently in the process of setting up a call with Airties leadership to extract extra details on the acquisition, RDK-B, emerging markets, and its possible mobile-influenced wardrobe change.

Wyplay Community: Being ahead of the curve is a blessing and a curse
Dish Network defying financial odds, despite churning TV subs for fun