Nordex will supply turbines for a 380 MW cluster of wind project in Finland, owned and operated by Fortum. Installation in scheduled to start in Q2 2023.

Orsted’s has generated the first power from its 1,400 MW Hornsea 2 offshore wind farm in the UK North Sea.

Dominion Energy has confirmed that Siemens Gamesa will supply 176 of its SG 14-222 DD turbines for its 2,600 MW Coastal Virginia commercial offshore wind project in the US. Installation is expected to start in 2024, with completion following in 2026.

BlueFloat Energy and Energy Estate have unveiled their first three offshore wind farms set for installation in Australia. Amounting to 4,300 MW of capacity in total, the projects included are the 1.4 GW Hunter Coast project and the 1.6 GW Wollongong project in New South Wales, as well as the 1.3 GW Greater Gippsland project in Victoria. The first two of these are set to used floating technology. The pair also stated that they are assessing a number of sites off the coasts of Victoria, South Australia and Tasmania, with further details expected in early 2022.

The Japanese government has approved three offshore wind farms as part of the country’s first auction for fixed-based projects. Of the 1,760 MW awarded, Mitsubishi Corporation is involved in all projects, with General Electric set to provide the turbines. The projects approved include the 891MW Yurihonjo and 478.8MW Noshiro Mitane Oga wind farms, both located off Akita prefecture, and the 390.6 MW Choshi development off Chiba prefecture, which are set to come online between 2028 and 2030. Support ranges for levelized costs of between $104.45 and $143.64 per MWh.

OX2 has applied for a Natura 2000 permit for its 1,800 MW Triton offshore wind farm in Sweden.

Vestas will supply turbines to the 300 MW second phase of the Taiwan Power Company offshore wind farm in Taiwan. Currently, 109 MW of Hitachi turbines are installed at the site.

Statkraft has selected Nordex to supply turbines for its 110 MW Torsa wind farm in Chile, with installation expected in Q2 2022.

General Electric has been selected to supply turbines to repower a 156 MW chunk of the 500 MW Windplan Groen onshore wind project in the Netherlands. Completion of the repowering is expected in 2023.

Ignitis Renewables has acquired an unnamed wind farm in Poland with a total capacity of 50 MW, which is expected to come online in 2023.

Enel has started operations of the 140 MW Rockhaven wind farm in Oklahoma.

Vestas has secured a 301 MW turbine order from TransAlta Corporation for the White Rock East and West wind farms in the Oklahoma, USA. Delivery for both projects will start in Q4 2022 with commissioning scheduled for the Q3 2023.

Siemens Gamesa will supply the turbines for a 302 MW project being developed by Ayana Renewable Power in the State of Karnataka, India. Commissioning of the project is expected in 2023.

Vestas has secured a 87 MW turbine order from ABO Wind for the Pajuperankagas wind farm in Finland, which is expected to come online in Q4 2023.

Vestas has received a 56 MW turbine order for an unnamed wind farm in France, which is scheduled for commissioning in the second half of 2022.

Siemens Gamesa has secured a turbine order from Eolus and Hydro REIN for their 260 MW Stor-Skälsjön onshore wind farm in Sweden, which will be completed in 2023.

Vestas has confirmed two large orders for wind turbines in the Netherlands. The 116 MW Windpark Maasvlakte 2 project is being developed by Eneco, will use 22 turbines of various size, and will be commissioned in Q4 2022. Windkoepel Groen also placed a 257 mW order across seven smaller project in the country, which will be installed between Q3 2022 and Q4 2023.

Vestas will supply turbines for Elera Renováveis’ 248 MW Seridó Oeste project in Rio Grande do Norte, Brazil, which will be commissioned in Q4 2024. The turbine OEM also announced the same day that it would provide units to 2W Energia’s 113 MW Kairos project, located in the state of Ceará, under the same approximate schedule.

Singapore-based developer G8 and Holim Tech have entered into an agreement to develop a 1,500MW offshore wind farm in South Korea.

Vattenfall is planning to deploy an electrolyzer unit at its operational 97 MW Aberdeen Bay offshore wind farm in Scotland. The utility is aiming to retrofit one of the eleven 8.8 MW turbines with a hydrogen production unit as early as 2024.

JA Solar has commissioned a 20 GW rod-pulling and wafer manufacturing plant at an investment cost of $910 million. Annual output value is expected to be $2 billion.

Xinyi Solar has become one of many companies expanding into solar-grade polysilicon manufacture, with plans for 200,000 tons production capacity, which will be about 10% of 2025 market share if it all gets built.

Besides which, the company has announced a further project development of 3.5 GW solar, 1.6 GW wind, and undecided energy storage.

GCL-Poly plans to raise $650 million via share issue for granular polysilicon factory building – granular silicon is a new and more cost-efficient technology with only one-third of the electricity consumption compared to the Siemens Process. The company has several hundred thousand tons of granular production capacity planned.

The 600 MW Datong Xinrong solar-plus-storage power plant has been commissioned in Shanxi, China.

NTPC has tendered for 1 GW of solar capacity to be located anywhere in India on the Interstate Transmission System, with a second 3 GW tender expected next month.

Appalachian Power has set out to develop 294 MW of solar and 208 GW of wind over the next three years. The utility serves Virginia, West Virginia, and Tennessee, and plans 3.3 GW solar, 3 GW wind, and 2.6 GW battery.

China has launched its first offshore solar floating test array in Zhejiang’s waters, with a couple of MW scale.

A 500 MW solar-fishery project has been commissioned in Haiyan Town, Guangdong Province, China.

The Indian state of Maharashtra has tendered 500 MW of agrivoltaic capacity through the federal KUSUM scheme.

South Korea has allocated 2.2 GW of solar in its latest tender, with an average price of $119 per MWh. Two-thirds of the capacity was assigned to projects under 3 MW in scale in the densely populated country.

Teledata which provides cloud hosting and data center services has a deal with Conrad Energy in the UK to install 1.2 MW of solid oxide fuel cells from Bloom Energy to provide hydrogen at Teledata’s 1500square meter data center in Manchester. The fuel cells will operate under a long-term Power Purchase Agreement (PPA).

China has connected the Wenzhou Taihan 550MW combo floating solar and aquaculture project to its power grid. It is on the beach at ​​the Southern Zhejiang Industrial Cluster in Wenzhou and covers an area of ​​ 4.7 square kilometers and uses 1.43 million modules. It works alongside a fish farm, to make better use of the available space in the sea. It should deliver 650 GWh each year (picture below). 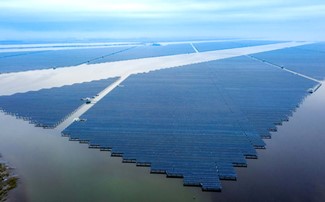 OPEC unable to cut oil prices, despite production increase
The world of renewables this week