Rethink Energy figures for the 18 leading national solar markets show 25.37 GW installed in the first quarter of the year. That implies about 30 GW installed worldwide in the period. 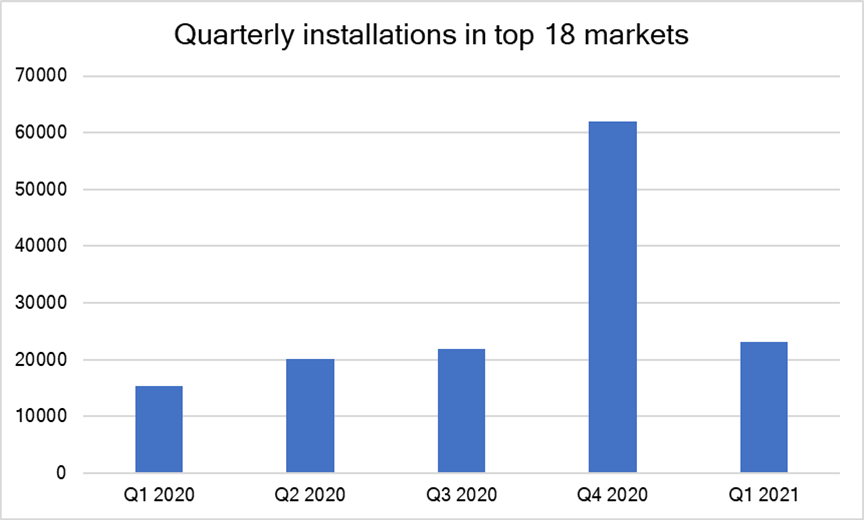 That’s an increase of 49% compared to the first quarter of 2020, but of course that doesn’t mean all of 2021 will be bigger by that proportion. Aside from supply chain issues, the USA is not reducing its subsidy for solar projects at the end of this year, and China is only ending a modest subsidy for rooftop projects, having already terminated it for utility-scale. In consequence, installations in 2021 will be less slanted towards Q4 compared to last year.

Following on from our figure of 146.5 GW installed in 2020, we still expect 178 GW to be installed this year. The story there hasn’t changed. Demand is very high, but a short polysilicon supply puts a hard physical limit of 193 GW on the industry this year, as well as impacting development in price-sensitive markets such as India, where modules are still more than half of total project cost.

While the expectation is 22% growth worldwide, there are standouts – Chile is booming and France posted its strongest quarter for years, while Taiwan and Australia are flagging and Vietnam will produce only a fraction of last year’s installations. 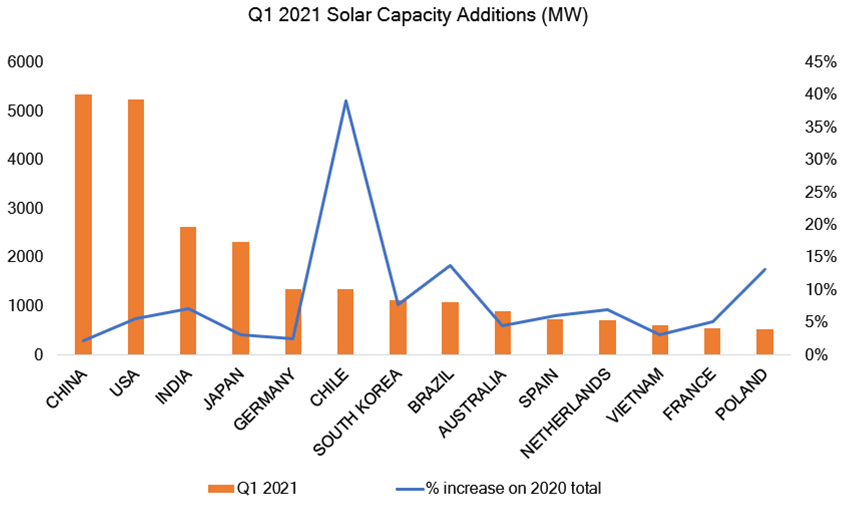 The backdrop to this is the easing of lockdowns and the advent of economic recovery, which leads to more electricity demand, and higher electricity prices. Fears that the pandemic would stall renewables in 2020 turned out to be the opposite of the truth – and now as it fades, growth will continue even stronger.

EIA figures show the USA installing 4 GW in the first quarter. It should be noted that EIA figures are in MWac and thus need an adjustment to compare them to MWdc figures from other sources. But either way, this was the third-largest quarterly figure so far, 30% higher than Q1 2020, and double the figure for Q1 2019. This means the USA is guaranteed to pass 100 GW in the second quarter. And for a brief moment, it is installing solar power almost as rapidly as China, though we doubt this will last.

Within the figures, utility-scale rose to 71% from 64% of the total within the quarterly figures as compared to Q1 2020. That’s especially impressive considering that we just saw a utility-scale commissioning surge in Q4 2020, which was to have been a deadline for an Investment Tax Credit reduction prior to Biden’s various policies boosting renewables.

Within this, both Texas and the Midwest are making a stronger showing than usual, with Texan solar installation rising to rival those of California.

In China, the first quarter saw two patterns for solar development; one was a strong showing for rooftop solar in the wealthy coastal and central provinces. The other was a shift of utility-scale projects to the north and north-eastern provinces, stretching from Ningxia to Heilongjiang; of these the largest was Inner Mongolia, where all kinds of economic development are proceeding apace. In contrast the north-western provinces of Qinghai and Xinjiang saw no new projects whatsoever, even though these hold 10% of China’s established solar capacity.

Official expectations of 55 GW to 65 GW to be developed during the year remain realistic, regardless of supply chain issues. While China ended nationwide subsidies for utility-scale solar in 2020, some monies are still allocated to distributed solar and provinces are playing a hand in that, setting the level of incentives. Nonetheless, utility-scale has increased slightly compared to Q1 of 2020, while distributed has decreased slightly.

India installed 2.6 GW in the first quarter of 2021, bringing the total to 40 GW. That’s according to updated figures from the Central Electricity Authority, which previously showed 1.6 GW. The new figure represents a total recovery and then some, in a nation whose solar sector saw its construction workers frozen out by lockdowns. However, April saw the pace slow once again to just 500 MW, as Coronavirus cases and lockdowns rose once more, so India’s solar developers are not out of the woods yet.

There will be a period from October to April in which there is no import duty on modules whatsoever: currently, it is at 14.9%, and from April 2022 the 40% basic Customs Duty will be implemented, forcing the shift to domestic manufacture over Chinese imports. While the absence of the 14.9% duty will be offset by the continued rise of module prices throughout 2021, there will be a considerable rush to develop as much as possible ahead of the new duty coming into force. Together with existing developments stalled by the pandemic India may reach 12 GW installed during 2021, which is larger than the pre-pandemic annual norm of 9 GW.

Japanese solar is undergoing only a very modest acceleration, ceding its accustomed third place to India this quarter. The policy environment remains largely unchanged for now, with gradual incentive reductions balanced by improved cost and performance of solar panels. A policy was recently announced that all new public buildings must install rooftop solar, but this is hardly game-changing.

The next change will be the shift next year to a Feed-in Premium instead of Feed-in Tariff system. Under current incentives, a typical rooftop solar installation takes more than 12 years to pay for itself, which is around half as long again compared to the USA. On the plus side for 2021, there will likely be a modest impetus to install solar ahead of the new tariff regimen.

German installations were 1350 MW in the quarter, representing the steady increase of an overwhelmingly rooftop market, which should accelerate slightly faster than the global average, from 4.9 GW last year to over 6 GW this year. New rules have downrated the maximum size for an installation to enjoy the Feed-in Tariff from 750 kW to 300 kW, but rising electricity prices will increase demand overall, and the small utility-scale segment could grow to half a gigawatt in 2021.

Chile rocketed to 6th spot globally this quarter with 1,339 MW installed. That’s hard to believe at first glance for a nation of just 20 million. The second take is, it must have been a few large solar projects which just happened to be completed in the period – Chile has more than its fair share of those in the Atacama to provide power to mining companies. But upon closer examination, it appears that most of the 1.3 GW installed was actually rooftop solar.

The cause for this is that as Chile recovers economically and lockdowns ease, power demand has increased. This has resulted in volatile and rising prices which were averaging $100 per MWh in March in the central region which includes the capital Santiago, thus making a rooftop solar installation much more profitable.

The reason the surge in power demand has had such a powerful impact in Chile, is specifically because the country has a large reserve capacity of diesel generators. When they have to kick in, electricity prices surge quite dramatically – though high by Latin American standards, they are normally much lower than $100 per MWh.

South Korea saw 1,122 MW installed in the quarter – an average result compared to 2020. Official statistics have recorded only 230 MW installed in April and May. While those numbers will be revised upwards, they indicate a slowing acceleration as 3.8 GW was installed in 2019, 4.1 GW in 2020, and this year it’s very unlikely that 5 GW will be reached. South Korea faces the same land constraints as Japan and Taiwan, but has broadened the scale of solar installations permitted to compete in its auction this year, allowing projects of over 20 MW for the first time.

Brazil has continued its shift towards distributed solar, with 834 MW of rooftop and 234 MW utility-scale bringing total capacity to 8.8 GW. The government plans to terminate all wind and solar subsidies from 2022, so 2021’s total installed solar capacity will greatly exceed the 3.2 GW developed in the course of 2020. The prediction from the national solar association Absolar is 5 GW, with $4.46 billion in private investment.

Australia installed 886 MW – of which 709 MW was rooftop and 177 MW was utility-scale. These are typical figures, increasing only slightly over one year ago. Though Australia has the highest solar per capita in the world, investment into renewables has fallen to the lowest level in five years, and soon installation figures will reflect that.

In a far-flung sparsely-populated nation, transmission grid expansions are much more costly than elsewhere, and grid connection has become the single most important obstacle to utility-scale projects. At the same time, rooftop has become so prevalent that it is pushing down midday electricity prices and is becoming sporadically involved in utility curtailment efforts in some areas. State governments of Victoria and New South Wales have strong pro-renewables sentiments but the federal government is supporting gas power.

There is no hard data available for Vietnam, but we estimate 500 MW of utility-scale along with a residual 100 MW rooftop installed this quarter. Vietnam has hit the buffers in terms of space on the grid – renewables are experiencing 8% curtailment at present – and in terms of policy incentives, which have been suspended for solar and will likewise come to an end for wind in October, before being reinstated after a delay, at much lower levels.

The 16 GW solar boom of 2020 couldn’t last – but pipeline figures from the national utility show 3 GW utility-scale solar to be commissioned this year. Rooftop, however, will collapse, as it was much more dependent on the Feed-in Tariff. Only some portion of the commercial sector will remain – Vietnam’s burgeoning middle class isn’t wealthy enough for a significant domestic sector yet.

France’s Q1 performance of 546 MW is more than half the amount it installed throughout all of 2020. This strong performance may herald it occupying a spot that’s more comparable to the lively markets of Poland, Spain, and even Germany, as opposed to the UK and Italy, where there is little activity. Unlike the rest of the EU, France has massive nuclear power capacity, which together with good offshore and onshore wind resources means it doesn’t have to build as much solar to meet targets as most of Europe will have to.

Poland developed 515 MW in the quarter, 38% more than Q1 2020. Solar capacity in this very young market has tripled to 4.5 GW in the past 15 months, but appears to have settled into a new normal pace. Common expectations see 2 GW per annum for the next five years or so, but this will likely be accelerated past as Poland’s vast coal plants are pressured by the EU.

The Netherlands has two advantages regarding rooftop solar: it is high-income even by European standards, and due to acting as the European shipment hub for imported Chinese solar panels, it is well-able to fund rooftop solar, as well as being one of the global hotspots for floating solar. Due to high population density it does not have much room available for ground-mounted projects.

Spain added 731 MW in the quarter, bringing the total to 12.3 GW. There is not much history to compare it to, since its solar industry was abruptly revived in 2019 and had installations totally slanted to Q4 – Q1 2020 was just 136 MW. The country is the European hotbed for corporate solar PPAs and mass portfolio investments into large projects, and the 3.2 GW installed in 2020 will be far surpassed this year.

As for the two other major Western European countries, Italy saw 30% growth compared to Q1 2020 – though only to 174 MW newly installed. Similarly, the UK posted 175 MW, but mostly utility-scale instead of rooftop. That puts it on track for a 30% growth over 545 MW installed throughout 2020. This is the typical growth rate in Europe at the moment, higher than the global average, as Western European markets recover from up to a decade in the doldrums.