Return to sails for shipping should alleviate hydrogen shortage fears

Sometimes the old ways are the best. At least that’s what Airbus spin-off Airseas is claiming, with its sail-based approach to decarbonizing the maritime industry. The company this week announced that its first ‘Seawing’ system has been installed, with the technology set to start reducing fuel requirements of transatlantic journeys from the start of next month.

Installed on the Ville de Bordeaux vessel, which is chartered by Airbus from Louis Dreyfus Armateurs, the Seawing will provide an automated wind propulsion system that can enable a reduction in fuel consumption by 10% to 40%, with the same reduction in associated greenhouse gas emissions.

This marks the first commercial installation for Airseas. The roll-on-roll-off ship, which is used to transport aircraft components between France and the USA, will deploy a 500 square meter kite to tow it through its monthly transatlantic voyages. Following formal approval from Bureau Veritas to start operations at sea, the project will conduct six months of sea-based trials for the technology.

Rather than your traditional boat sails, the Seawing looks like your standard parafoil kite – similar to those being used by the like SkySails to try and commercialize airborne wind energy (AWE). 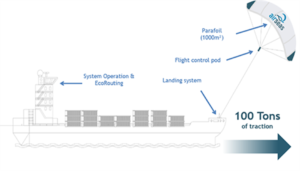 While the Ville de Bordeaux system will use a half-sized prototype, the full system will use a 1,000 square meter parafoil, flying at an altitude of around 300 meters. At this height, wind speeds are far more consistent and nearly double those found at ground level (c.100 kilometers per hour) and should provide up to 100 tons of towing force.

In operation – controlled and monitored remotely from the ‘bridge’ of the ship – the kite system, consisting of mast trolleys, winches, and storage space, is launched and landed automatically. Using digital twinning, the Seawing uses an Eco-routing algorithm which optimizes the ship’s route according to the weather, as well as the figure-of-eight flight path of the kite itself, which generates 10 times more traction power than a static kite or sail. Modelling has so far shown that the optimized system will reduce the fuel consumption of maritime journeys by an average of 20%.

With fuel costs representing as much as 60% of total ship operating costs, this could save ship owners up to $2.5 million per year for each vessel, while reducing CO2 emissions by 5,200 tons.

The other benefit of the Seawing is that it can operate as a standalone system and can be safely retrofitted onto existing ships in just two days.

Developed by former Airbus engineers since 2016, Airseas is hoping that its experience in digital twinning and automation from the aeronautical sector will give it a distinct advantage in the maritime sector.

CEO Vincent Bernatets said “This first installation marks a significant milestone not only for Airseas, but also for wind and other renewable propulsion technologies in general. Given the urgency of the climate crisis, the world needs to see a drastic reduction in carbon emissions now. In shipping, we can achieve this by using the full set of tools we have available to us today. Wind propulsion is one of these and will play an essential role in helping shipping achieve its much-needed decarbonization transition.”

Following the half-scale demonstrator on Ville de Bordeaux, Airseas has lined up two full-scale pilots with Japan’s K-Line for 2022 and 2024, with the company promising to contemplate an order of up to 50 additional Seawing units.

By 2023, the company should have a new factory under construction, aiming to produce 1,000 units per year by 2031. By this time, Airseas ambitious objective is to have systems deployed on 10% of the global shipping fleet.

The company is not, however, the only one trying to revive the wind-driven shipping approaches used since 3,500 BCE. MOL, another Japanese firm, is planning eight ships with pivotable and foldable hard “wing sails.” Some are developing approaches using suction wings that house fans for propulsion, while others are experimenting with large, vertical, spinning cylinders called Flettner rotors. According to the International Windship Association, the number of large cargo ships with some sort of sail will quadruple through next year alone.

At Rethink Energy, we often criticize incremental efficiency-based approaches to decarbonization. As we’ve seen through the energy transition of the automobile market, existing technologies are always bound to get out-bid by disruptive Tesla-style entrants.

However, Airseas is not focusing on efficiency gains within fossil-fuel-based propulsion systems and is instead making appreciable system-wide improvements – reducing overall engine effort, regardless of the fuel.

Currently, the maritime industry – largely due to cargo shipping – is responsible for around 3% of global emissions; almost on-par with aviation. Nearly 90% of all container ships are powered by heavy fuel oil, meaning that a single long-haul journey can be responsible for more than 5,000 tons of CO2 being pumped into the atmosphere, along with vast amounts of nitrogen oxide, sulfur oxide, and other particulate matter.

So far, apart from biofuels, there have been very limited options available to those attempting to decarbonize their shipping fleets. As within any type of transport, clean fuel selection depends on energy intensity and utilization – how much energy is required per mile and how often the vehicle is in use – with points of differentiation around cycle costs and recharge time.

Current lithium-ion battery packs have an energy density of around 260 Wh/kg, with a cycle life of up to 2,000 and a recharge time of around 45 minutes. In contrast, fuel cells run on compressed hydrogen can achieve density values of 2,000 Wh/kg, operating for 15,000 cycles and refueling in under 20 minutes. Converting hydrogen as an energy carrier into ammonia, can push this up to 3,500 Wh per kilogram.

While this is still less than half the energy density of diesel, it is far closer to a value that will be deemed acceptable for onboard storage by shipowners; its volumetric density is broadly similar to that of methanol – another solution some are exploring for decarbonization. Like hydrogen, however, ammonia has the benefit that it does not emit any CO2 when used to power an engine or a fuel cell.

Green hydrogen and green ammonia provide the only true route to a net zero shipping industry, and are already gathering momentum. Fortescue Metals Group expects to have its first ammonia-powered ship in operation by the end of next year, with all of its 100 iron ore carriers running on green ammonia “well within this decade.”

Once maritime emissions become embroiled within carbon taxation, as they are expected to in Europe next year, Rethink Energy expects ammonia will power over 30% of ships by 2040, at which point ammonia-powered vessels will account for nearly three-quarters of all unit sales.

By 2050, 74% of all ships globally will be running on green ammonia, causing a sectoral emissions reduction of 55%. Other technologies, including batteries for short-haul shipping, as well as biofuels and methanol, will drive emissions down even further.

The demand for green hydrogen within this ammonia production will exceed 4 million tons per year. Reducing the need for this fuel will not only reduce costs for shipowners, but will open up hydrogen access for the exploding number of users in other ‘hard-to-decarbonize’ sectors through the transition to net-zero emissions.