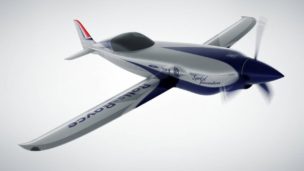 A release came out in the dying days before Christmas about a world record speed attempt for an electric aircraft, built by jet engine maker, Rolls Royce. It has issued this release before, or something like it, about a year ago, and promises to make it come true this spring. The aircraft is a combined effort with Rolls Royce taking overall management control and an electric drive chain provided by Oxford based Yasa, and aviation start-up Electroflight.

Rolls Royce has been at this a while, and has its own Accel initiative (Accelerating the Electrification of Flight) division in partnership with the Department for Business, Energy & Industrial Strategy and Innovate UK.

Half of the funding is provided by the Aerospace Technology Institute (ATI), in partnership with the BEIS.

The release just prior to Christmas was about the unveiling of the finished airframe, see below, a single propeller aircraft. But it still needs full integration with the propulsion system, before it goes on to try to beat the 300 MPH record.

It was back in May 2019 that Yasa announced that its electric motor had been chosen for an electric racing car by Ferrari. Three of the same engines will sit back-to-back in the new aircraft. Yasa claims that it has had a major breakthrough by experimenting with what it calls axial-flux electric motors which were first designed in the UK back in 1979, at first on motorbikes, and then cars.

In an Axial Flux machine, the magnets are located further away from the central axis which results in a larger “lever” on the central axis. They can also have two rotors, one on each side of the stator (often part of the wheel), so a larger surface area over which to develop power. Also traditional radial flux designs fail to use a lot of the coil because some of it is too far away from the stator, and that increases the weight and materials of the engine. So Axial Flux machines are light. The coils are also in direct contact with the outside of the engine, meaning it is easier to bring in air to cool them, again improving performance.

The outcome is a 5 X improvement in performance from both Yasa, and also from prominent rivals such as Belgium’s Magnax – both are making inroads in selling the larger car, bike, plane and wind farm designers on the idea.

The ionBird test airframe, named after the electrical technology propelling the aircraft, was also unveiled last month. The ionBird will be used to test the propulsion system before it is fully integrated into the plane. Planned tests over the next couple of months include running the propulsion system up to full power as well as key airworthiness checks.

The project will have an incredibly dense battery pack providing enough energy to fuel 250 homes which translates to flying around 200 miles (London to Paris) on a single charge. This powerpack has 6,000 cells designed to minimize weight and maximize thermal protection. It also has a specially built cooling system to ensure optimum performance. It would be fairly disastrous to have a thermal run-away from the energy storage at 40,000 feet.

The engine uses axial electric motors and drive the propeller blades at a lower, stable RPM than most propeller aircraft. They will collectively deliver 500 horsepower at full power, delivering 90% energy efficiency.

The Rolls Royce Accel project is also partnering with Airbus on the E-Fan X technology demonstrator project, which is where initially a 2 MW giant fan replaces one out of four jet engines, on a much bigger aircraft. This hybrid stepping stone to fully commercial electric aircraft has attracted Widerøe, a regional Scandinavian airline which wants to replace its regional fleet of 30 planes by 2030. Currently most operators have 2040 penciled in for their first venture into fan driven commercial flights.