Small energy providers in Germany have joined forces to launch an assault on RWE and E.On, as the pairing continues to progress with plans for a massive asset swap which could transform the energy market in the country.

Led by electricity retailer Naturstrom, the group of 11 companies lodged a legal action with the European Court of Justice on Wednesday, appealing the deal – valued at $44 billion – saying it will restrict competition within the Germany market, “clearing the way for two national champions at the expense of medium sized companies.” The primary aim is to overturn the approval of the deal last September by the European and German regulator Bundeskartellamt, and essentially reverse the asset swap.

The RWE-E.On asset swap is already underway, following last years approval, with RWE taking over E.On’s electricity generating assets and trading business, recovering its position across electricity production from coal, nuclear and gas, as well as wind and solar power. RWE also received a 17% stake in E.On. Rethink Energy cannot recall when a decision by the Bundeskartellamt has ever been reversed after protest, but the ECJ can theoretically intervene.

Moving in the other direction, E.On will become a consumer facing business, with focus on sales of electricity and networks – taking on a total of 50 million customers as it becomes one of the largest suppliers in Europe. E.On also took over RWE’s 76.8% share in Innogy, while RWE retained all generation assets, bringing its total share in the company to 90%. 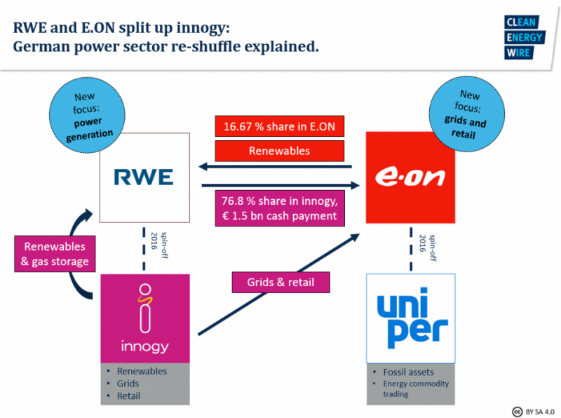 Through this, previously competitive companies will each be able to hunker down in their new focused areas, gaining market shares that are several times greater than any competitors in either market.

The call to annul the deal under Article 263 of the Treaty of the Functioning of the European Union (TFEU) aims to assess whether the European Commission acted lawfully in its decision to approve the deal. This does not have the immediate power to suspend activities that are currently underway as assets are handed over, but if the lawsuit sticks, then the process could be entirely reversed, to bring things back to how they were before the process started last year. Previous decisions to reverse European Commission merger approvals have involved a huge amount of compromise, and in some cases, the mergers were not really reversed at all, despite what the courts said, because it would have destroyed the assets.

With the lawsuit coming from other generation companies, the complaint is initially fired at the release of RWE’s customers as part of the transaction, although further legal action is expected to mount around the E.On side of the deal.

RWE has so far played down the risk behind the lawsuit, stating such a process as “common for a large and complex transaction,” adding that it “does not share the applicant’s assessment and is convinced that the approval will continue to exist.”

The European Commission approved the acquisition E.On’s generation assets last February, but went on to investigate the retail side of the affair, with concerns around reduced competition in several EU markets including Germany and Slovakia. It was concluded that the German energy market is too diverse and in the hands of too many suppliers for this to skew the market.

It wouldn’t be the first time that the EU commission got this type of decision completely wrong, with a more recent bias towards the creation of large Europe-wide corporations.

But the key way of thinking about this deal is that one company has opted to take the safety of tied customer relationships, in an era when we encourage customers to swap supplier as often as possible, and one has taken on the role of generating the energy that they will use – with RWE getting a renewables development pipeline which should more than double its renewables holding, virtually overnight, making it a true force in renewables.

This will make RWE one of the world’s largest renewables operators. It already has a portfolio of over 9 GW, with a pipeline that now exceeds 17 GW of mostly wind projects.

The control that RWE and E.On have over their existing markets will obviously increase, but that doesn’t have to mean that competition is squashed – especially for energy companies that continue to differentiate by pushing for 100% clean energy – just look at how OVO Energy has penetrated the Big-Six suppliers in the UK with its takeover of the SSE services arm.

For E.On the danger of having lots more customers can only cause a market skew if it gives it unprecedented buying power, or if it can adjust consumer pricing – but those two issues are well regulated in Europe and its merger benefits only come from being more efficient.

The likelihood is that the ECJ will be perfectly happy with the deal, especially as it has been looked at deeply by the Commission. Rethink Energy fells it is highly unlikely to try to find a compromise to appease the smaller energy suppliers.

Other companies as part of the new lawsuit include regional suppliers in Germany: Mainova from Hesse; Teag from Thuringia; Enercity from Hanover; Leipziger Stadtwerke and Stadtwerke Frankfurt.