We’re fairly sure the move this week from giant French oil services group Schlumberger is a significant pro-hydrogen move, taking the company out of its roots in oil and opening a brand new front.

On the surface of it, Schlumberger’s New Energy division is going to partner with pure research player, the CEA, alongside Vinci Construction, and materials supplier Vicat and a climate investor part of the French Occitanie region, to introduce a line of reversible fuel cells.

The CEA started life as the Atomic Energy Commission in France, and is now expert in solid oxide electrolyzers. One of its roles is to certify the performance of new products on the market. Last year it worked with a number of suppliers, including Elcogen from Estonia, which claims its fuel cells hold the world record for efficiency, and which operate at lower temperatures than most, around 650 degrees. It has worked with Elcogen on the Reflex European Project for fuel cells.

The press release simply said that the European Commission had given the group permission to operate, effectively saying it would not constitute a merger, and does not constitute a government sponsored industrial effort, just a joint venture. That venture’s name is Genvia, and it will take climate money from the Occitanie region through investor AREC, add expertise from Schlumberger, and begin building the product into projects handled by Vinci Construction, part of a 72,000 employees €14.9 billion group, perhaps with materials sourced from Vicat, a mineral and bio-based construction materials business. One of its roles is to make cement, so this may be a special use case for hydrogen produced by the product.

But what exactly can you do with a reversible fuel cell? In effect it is an electrolyser and fuel cell combined, and it is built as a kind of reversible reaction – it’s not a fuel cell AND an electrolyzer plugged together back to back. So it can take electricity – be that from nuclear overnight, or the grid, or solar panels or any kind of turbine, and turn it into hydrogen, and then release that hydrogen through the same miniature stack, to give out electricity. It can even do both at the same time, we understand.

It is in effect a cheap, small hydrogen storage device, which may compete quite favorable with lithium ion batteries for say a home, or a ship or anything stationary, like a factory or a mini-grid.

The private-public partnership model adopted for Genvia is typically French – a combination of willing parties each with their own aims, coming together to get a lot of separate problems solved while public operations taking on part of the cost to make it cheaper for the commercial side. They often walk very close to the line which constitutes government preference and support for French industry, hence the need for European Commission permission.

The group says that Genvia will accelerate the development and the first industrial deployment of a CEA designed high-temperature reversible solid oxide electrolyzer technology (so not the Elcogen low temperature design), for clean hydrogen production.

One of the key ingredients of Solid Oxide Fuel Cells is that they produce clean, quiet, and efficient energy, but they throw off a lot of heat, so they are particularly useful when both electricity and heat are required. This grouping could well put forward a solution to the French government of powering homes or factories with these devices, including siphoning off the heat to a business or house. From hydrogen to electricity these devices can be as high as 74% efficient, so it doesn’t matter if the hydrogen comes out of an 80% efficient electrolyser, as the total losses of both processes still leave close to 60% round trip efficiency, better than most thermal generation methods.

If their waste heat is also harnessed, for instance by feeding it into central heating systems, the overall fuel efficiency can approach 90%, making the round trip efficiency more like 72%.

Solid Oxide Fuel Cells because of their high temperature allows them to internally reform hydrocarbon fuels into hydrogen so they can be powered by fuels such as methane, propane and diesel and a variety of gaseous and liquid biofuels, which could lead to slightly more sinister uses of this product set by oil specialist Schlumberger, perhaps temporarily, at higher efficiency, potentially using the existing gas mains, to provide all energy needs for a property including electricity.

One target of Genvia is to achieve high efficiency with less electricity needed to make each kg of hydrogen. We will watch what Schlumberger does with these devices, at scale.

Manufacturing will be at a new Genvia gigafactory, in Béziers, Occitanie Region, France. A stack of the cells comes in a very small format (see picture of the Elcogen product below) and could easily be housed inside wind turbines or built into a ship’s fuel cell. Of course hydrogen would have to be stored somewhere, which may be significantly more bulky than the cells themselves. 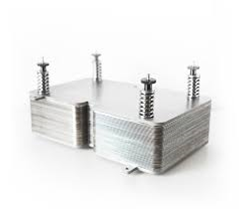 It is the idea of using these devices at wind farms, to immediately convert curtailed energy into hydrogen, and go to storage, which can then be released when required. This could be used to flatten the output of a wind farm, so that it appeared like a dispatchable resource to a grid, with just a buffer of one day’s hydrogen stored.

Schlumberger says it is already working on other ventures in the domains of hydrogen, lithium, carbon capture and sequestration, geothermal power and geo-energy for heating and cooling buildings.

Last week we covered Boston Metal, which coincidentally also uses a one way molten oxide electrolysis to make hydrogen for steel making, and this may be another application that Schlumberger would target for the product line.