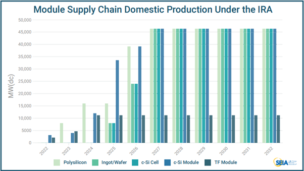 In June 2021 the recently elected Senator Jon Ossof proposed his Solar Energy Manufacturing for America (SEMA) Act, and the Solar Energy Industries Association (SEIA) seized the moment to predict that the US could reach 50 GW of manufacturing capacity by 2030. Now that the Inflation Reduction Act (IRA) has finally passed, including solar investment and production tax credits, the SEIA has published a new whitepaper, Catalyzing American Solar Manufacturing, which restates that 50 GW figure.

In fact, the SEIA says the US can now get to at least 50 GW of manufacturing throughout the entire supply chain, all the way to polysilicon, with the first large facilities beginning construction in 2023 with modules, then gradually working back up through cells, wafers, ingots and polysilicon. In the SEIA’s vision, each part supports the other – even modules, one of the simplest and least capital-intensive segments, will become a lot more cost-competitive once it has domestic solar-grade glass supply to work with.

Crucially, the SEIA expects polysilicon production to still only be around 15.5 GW’s worth – 45,000 tons or so – by end-2025, only to reach almost 40 GW by end-2026, and 46 GW in 2027. In fact the SEIA’s prediction stops in its tracks in 2027, which is not what’s going to happen – but it is how far the IRA can guarantee financial returns on new factory investment by itself, given that its lifespan is finite. Another oddity is the low growth accorded to TF – Thin-film – modules, given the US’ historic utility-scale skew and First Solar’s prominence.

Ever since the passing of the Inflation Reduction Act there has been a constant trickle of solar manufacturing announcements, but so far they are small. For example, this week Ascent Solar, a manufacturer of CIGS thin-film solar modules, has been listed on the Nasdaq stock exchange, having been de-listed six and a half years ago. Really big announcements, such as brand new polysilicon and wafer facilities, or the new factory which First Solar said it would consider if the subsidies were passed, have yet to be wheeled out. Perhaps those decisions will be made after the midterm elections, or once certain other issues such as global economic turmoil and fuel prices become more clear.

This week did see REC Silicon and Mississippi Silicon sign an MoU for supply of the latter’s industrial silicon– the raw material which is purified into polysilicon. Previously in June REC had also announced that it intends to negotiate a similar supply deal with Ferroglobe.

REC Silicon’s CEO, James May, has said since the passing of the IRA that he is “hopeful” that “the entire solar supply chain in the US will be fully established.” REC Silicon had already announced it would restart production at its 18,000-ton Moses Lake polysilicon factory, but it is questionable how long it would have remained open from that point without the IRA production tax credit, and it interesting that May only said he was hopeful.

The big question for solar manufacturing and the IRA is whether the full supply chain will be reshored – not just cells and modules, but also wafers and polysilicon. As we have previously discussed, even a subsidy covering the marginal production cost of Chinese manufacturers may not be enough to bridge the gap for US-based facilities – it’s one thing to revive existing capacity, quite another to build a new one at an upfront investment cost of at least $1.5 billion per 100,000 tons (enough for 40 GW), in a country with Western wage and electricity prices.

That gap has to be filled in by sanctions on China based around the Xinjiang forced-labor allegations, and that comes down to arbitrary decisions made by politicians, plus the details of enforcement and rules. So you can see why the SEIA predicts at first only module, tracker, and inverter capacity being reshored, followed by cell wafer and ingot – though it frames this rather as making sure that domestic downstream demand exists first before upstream supply is built.