Get ready to start seeing more pictures of wind turbines posted up against the world’s famous landmarks: Siemens Gamesa has just announced the latest bid for the world’s largest wind turbine – weighing in at 14 MW with blades that are 108 meters long. Rather than being a ‘mines bigger than yours’ competition, the real question behind the success of these larger turbines, is how much they will influence project cost?

From the name of the SG 14-222 DD offshore wind turbine, you can extract both the direct-drive drive train and 222 meter rotor diameter, as well as the system’s 14 MW nameplate capacity, although the turbine OEM claims that a ‘Power Boost’ can actually push power output up as high as 15 MW. Either way, the turbine has set a new milestone for capacity – surpassing the title held by GE’s 12 MW Haliade-X platform since 2018 – despite only a 1-meter increase in blade length. 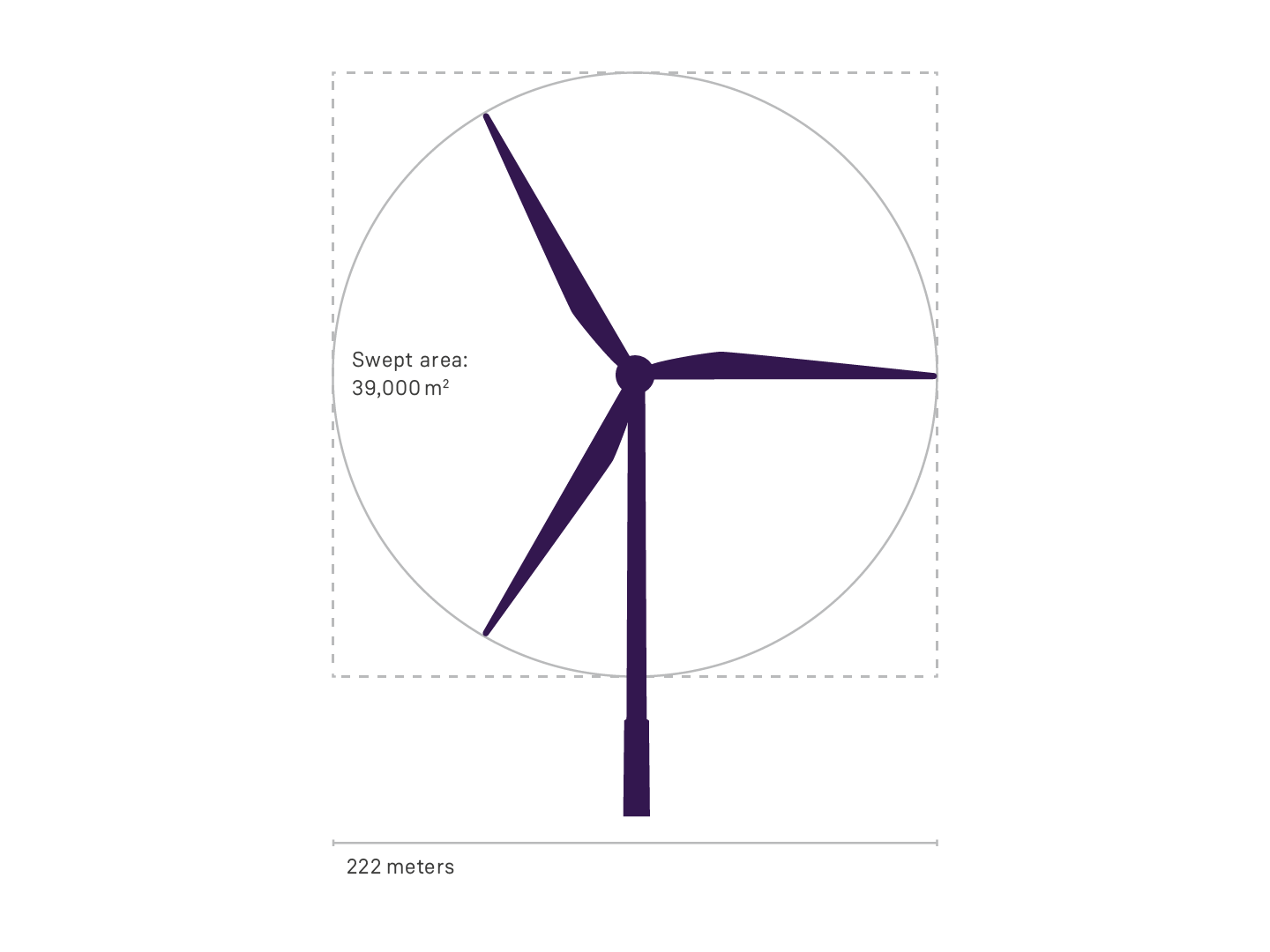 In its press release announcing the turbine, Siemens Gamesa announced that the lifetime avoidance of CO2 emissions from a single unit – compared to coal-fired generation – would be approximately 1.4 million tons of CO2.

It’s easy to think that with wind turbines, that the key advantage to scaling up size is the direct increase in power – which scales with the swept area of the turbine (39,000 square meters for the SG 14-222 DD). But the reality is, that the larger the turbines are, the more they have to be spaced out. If too close together, aerodynamic wake losses cause wind farms to operate below rated capacity on a more regular basis. Because of this, the optimum spacing for turbines is often between 10 and 15 times the turbine diameter, which means that wind farm density falls at the same rate at which power output is increased – essentially cancelling each other out. There is some benefit with larger turbines, in accessing greater wind speeds at higher altitude, but the key advantage in large turbines sits within cost reduction.

If you’ve got a set amount of space for a wind project, you’ll naturally need less turbines for the same amount of power output, than you would with smaller turbines. This means less cabling, less regular maintenance, reduced time of installation, and so on. All of which, brings down the levelized cost of energy of a wind project – often at a greater rate than the cost of building the larger turbines.

It is this cost increase which provides the greatest constraint to single-step jumps to larger turbines. Siemens Gamesa proposed several years ago that it could jump from 7 MW turbines, straight to 14 MW – and that the technology was there to do so – but eventually decided on a more incremental approach. The reason behind this is that cost increases are not exclusive to the turbine itself. Factories need to be suitable to build and assemble blades of the increased length, as well as the nacelle of increased integrity. Sub-suppliers may also need to ramp up production of components through new factories, and new installation vessels will be needed to handle the longer blades. All of these contribute towards the LCOE of an offshore wind project – and reaching economies of scale at a smaller turbine size can often be a better way of reaching industry-wide cost reduction, before a gradual increase in blade length.

There are also some physical constraints in making larger turbines – longer blades are naturally heavier, and thus greater loads need to be managed throughout the turbine structure, with stronger blade structures and a stronger interface at the nacelle. Turbine tip speed also must be kept fairly constant to prevent excessive noise, meaning more complex gearing systems are needed in larger turbines.

Siemens’ new turbine will use its patented B108 blades, which are constructed in one single piece – a method which differs from the rest of the industry; GE and other competitors typically glue two pieces together. Without a point of weakness at this interface, Siemens claims that it has been able to make its blade thinner, and therefore lighter, than its competitors, with a mass advantage of up to 4%. This advantage scales with blade length and allows Siemens Gamesa to either reduce costs across the system, or to push for longer blades.

Weight reduction has also been achieved in the turbine’s nacelle, which will weigh in at 500 tons – a relatively low mass considering the size increase. Through this, Siemens claims that this nacelle has a knock-on effect of optimization to the tower and foundation substructures, in terms of material cost, load-bearing ability and transportability.

Going larger is also not ideal for some projects – certainly not those onshore. In France, objections have meant that offshore wind project have been pushed further offshore – meaning that floating technology is needed if large turbines are going to be used. At the moment, the primary advantage of larger turbines is in projects where installations costs are high due to seabed conditions, long distances from shore, or a high proportion of imported components.

Currently the world’s largest turbine in operation is MHI Vestas’ 9.5 MW model, used in projects including this year’s Northwester 2 project in Belgium. Following the announcement of this turbine, MHI Vestas became the first OEM to unveil a 10 MW system in 2018, joined by Siemens Gamesa several months later. This was however surpassed when Siemens Gamesa expanded its turbine to 11 MW in 2019, but still short of GE’s 12 MW Haliade-X model.

At the moment though, very few of these huge-scale turbines have been installed. On its current timescale, Siemens Gamesa hopes to have its first prototype for the SG 14-222 DD in operation by 2021 in Denmark, before entering commercial operation in 2024. With delays in the US projects that will be using the Haliade-X, it’s possible that we’ll see the SG 14-222 DD up and running ahead of its American counterpart.

It is unlikely that this will prevent orders from flooding in – GE received orders for its Haliade-X just months after its announcement, and we’d expect to see the same for Siemens Gamesa, especially as the offshore sector continues to gather momentum. Developers are already used to ordering these ‘green banana’ turbines that are still just on paper.

Siemens Gamesa seems pretty determined to solidify its leading position in the offshore wind sector, after GE managed to draw away some attention with the Haliade-X. For installations in Europe through 2019, for example, Siemens Gamesa’s market share sat at 68.1%, well ahead of MHI Vestas (23.5%) and GE (1.5%).

On an international scale, this will start to be diluted as installations ramp up in Asia, centered around activity in China. Within China, the top 4 OEMS (Shanghai Electric, Goldwind, MingYang and Envision) occupy 90% of the market, and will soon look to spread their operations to neighboring markets like Taiwan and Japan.

With orders starting to ramp up, in Taiwan especially, through projects including the 300 MW Hai Long 2 wind farm, Siemens Gamesa clearly aims to tackle this increasing its manufacturing presence in the country. It announced this week a partnership with the Yeong Guan Group, which will establish an export-ready nacelle hub from 2021, with the aim of supplying projects across the Asia-Pacific region.