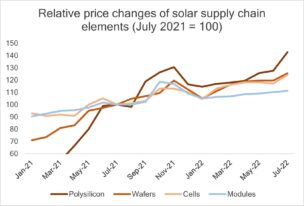 Europe’s power prices have tripled and the indefinite, likely permanent reduction of cheap Russian pipeline gas makes that a feature for the rest of the decade. One would think that would more than compensate for higher solar module costs, and indeed it does for rooftop installations for which module cost is in any case a small fraction of project cost. But for utility-scale projects module cost can be as high as 40% of total investment cost, and the Euro has fallen 10% against the yuan and 18% against the dollar in a year. This week PV Infolink’s price report included a section portraying some projects in Europe getting delayed due to high module prices – “inventory draws slow down, as prices hit the $0.29 per Watt threshold. Further price trend hinges on the outcomes of buyer-seller negotiations”.

As we have covered ad infinitum, high module costs are primarily due to polysilicon, although shipping costs are also high in the “pandemic era”, and other elements such as glass and silver paste stick the knife in from time to time. The current situation in which module prices go as high as they can while still being bought, and thus creep very slowly upwards, is similar to last year’s price progression – except that prices are constantly rising throughout the year, whereas in 2021 there was a plateau in the middle.

Moreover, due to the Q4 installation rush that still prevails in China to meet various subsidy deadlines, there is always pressure on prices up until November, followed by a fall – but the July 2022 prices for upstream components are already significantly higher than in July 2021. There’s a delay of around a month for a polysilicon price hike to be felt throughout the supply chain as a whole, so August could see a further 5% price hike.

But it’s hard to say how bad this really is for solar project viability outside of Europe when that’s offset by high inflation, especially inflation of energy prices. Besides the PV Infolink report on European purchases there have been delayed utility-scale projects in Wisconsin, reported to the state’s Public Service Commission last month by the developers involved, but these were primarily attributed to the Department of Commerce’s tariff investigation and to the threat of Xinjiang sanctions. Other reports of delayed utility projects were made about Texas – but the same explanation would apply. India would be the typical market most sensitive to module price changes – but the big change there will come when the accumulated stock of relatively cheap modules imported to excess, during the period in which its customs duties were voided, runs out.

LevelTen Energy previously forecast little change in PPA pricing this year, but since the sanctions on Russia, the organization now reports that they have surged by 47% while still remaining attractive. Poland now plays host to solar PPAs of over $90 per MWh – which is at least good for the solar industry, as Polish solar had already rapidly grown to 70% of the market activity seen in Germany itself.

One much more straightforward relationship to high polysilicon prices is the drive to use thinner wafers in solar panels – 25% thinner means 25% less polysilicon and 10% lower module cost. From 175μm in 2020, mainstream solar offering have previously shrunk to 165μm, then 160μm – this week we see 155μm in a quotation from Tongwei. The drive for thinner wafers is another benefit for the upcoming heterojunction technology, with Risen Energy announcing a 120μm pilot product in May, and Zhonghuan 130μm also that month. Heterojunction’s time of financial viability has been brought forward by the polysilicon price, perhaps all the way forward to Q3 of this year.

This week also saw the International Renewable Energy Agency (IRENA) release a new report, detailing a 13% fall in utility-scale solar LCOE in 2021, even with the 4% – 7% module price rise it states prevailed in Europe that year. The report may not be relevant to 2022, or 2023, but it serves as a reminder that there is nothing fundamental about solar’s increased costs right now, and that when the price comes back down, it will catch up on several years of missed LCOE declines.