The commodity prices for both steel and iron have continued to rocket to record levels, with iron in particular reaching all-time highs this week.

While governments ramp up infrastructure investments and economic activity – a natural driver of demand – heavy emitting mining and steelmaking companies are facing increasing pressure to curb production levels. Until emission-free steel can be produced at scale – possibly the back end of this decade – these prices can be expected to stay.

S&P Global Platts indicated that price last Tuesday hit $193.85 per ton, surpassing the previous record of $193 set during the 2011 commodity boom in the wake the 2008 financial crash – as the world turns to infrastructure to stimulate its Covid-19 recovery. Demand could rise as much as 5.8% between 2020 and 2021. 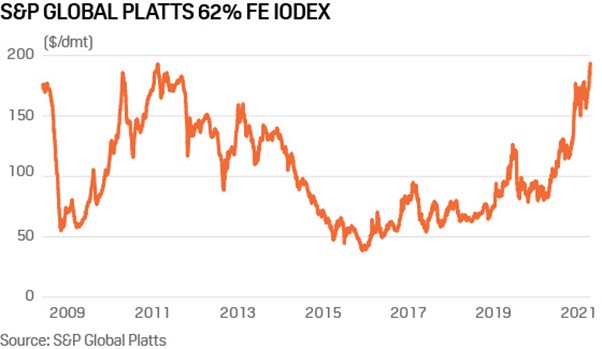 The rampant demand for crude steel has been mostly driven by China, which was responsible for 59% of production in 2020, lifting after its $154 billion relief package for industry. Rising prices for steel have increased margins, causing steelmakers – where possible – to ramp up the production of their steel mills as they look to satisfy the global hunger for steel in a post-Covid world.

While China’s industry got back up and running faster than elsewhere in the world, when economies started to ease back open last summer, global steel demand started to rally in tandem. Since then, hot-rolled coil prices for steel in the US have more than tripled, while they have more than doubled in Germany and Brazil. President Joe Biden’s proposed $2 trillion infrastructure spend certainly won’t slow this down; 30,000 kilometers of roads and 10,000 bridges would be fixed, all of which will require vast amounts of steel. 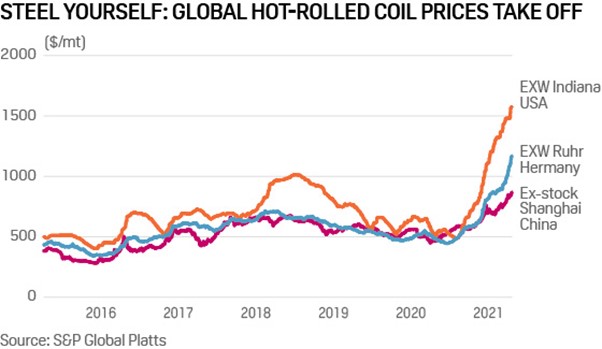 In China 90% of steel is produced through primary methods of production; using coal-powered blast furnaces and basic oxygen furnaces to produce 1 ton of steel for every 1.5 tons of iron ore input.

However, while demand has been on the up, production levels – in China, in particular – are being squeezed. Recent plans from the country’s Metallurgical Industry Planning and Research Institute have emerged to see the country’s steel industry reach peak emissions in 2025, with immediate action taken to limit crude steel production or the installation of new production capacity.

The average ton of steel produced today in China results in more than 2 tons of CO2. As such, steel is the largest contributor of 31 manufacturing sectors to industrial emissions in China, and is one of the largest barriers to the country’s ambitions of reaching peak emissions in 2030 and net zero by 2060.

Several recent measures have been implemented by Beijing to crack down on these emissions, including nine-month production curbs on 23 mills which violate environmental criteria, starting this month – some having to reduce output by as much as 30%. Reports indicate that several plants, including those belonging to HBIS, have been mandated to reduce emissions by more than 50% in this timeframe, triggering thousands of layoffs. As many as four mills in the city of Tangshan – a hub for steelmaking, responsible for 14% of the country’s total – that were not complying with these restrictions – some by forging production records – now face punitive measures from government officials. Tangshan has ordered production cuts of between 30% and 50% of capacity by the year-end.

In total, production restrictions from 20th March to 30th June will cut hot metal output by 10,000 tons per day from previous levels. The country produced 271 million tons of steel in Q1 2021, flat from Q4 2020. Steel inventories have also been falling, while profit margins at mills have risen to between $135 and $175 per ton.

The cuts in Tangshan had the immediate effect of driving the price of steel to record highs. However, with production falling, the iron ore market – which had not been directly ordered to slowdown – was forced into a surplus, causing prices to dip to $156 per ton. Now though, with steelmakers ramping up production elsewhere to make the most of the high margins, prices are rebounding fast. Boosting production is also a cautionary measure by these companies ahead of possible further restrictions imposed by Chinese authorities to scale back stimulus measures.

With domestic production levels of iron ore ramping up, this will also allow China to follow its plan of increasing Chinese ownership of iron ore supplies, as per a 5-year roadmap published by the Ministry of Industry and Information Technology.

Both Brazil and Australia have also seen a reduction of iron ore supply. Miners Rio Tinto and BHP saw respective production fall by 11% and 5% between Q4 2020 and Q1 2021, due to seasonal impacts – largely weather-related – although this is set to ramp back up in Q2.

But with steel demand set to rise by 60% through to 2050, any kind of limit on production – even if for the sake of the climate – will drive steel prices up.

The fact that primary production is rising at all, however, will be a worrying sign for anyone concerned about climate change, especially if global emissions are to be anywhere near net zero by 2050.

However, with global steel giants like ArcelorMittal, Nippon Steel, Posco, and China’s Buowu Steel Group pledging themselves to net zero emissions of their own accord, this primary production itself will also face dramatic transformation.

With margins for steel and iron ore sitting very prettily for producers, many are anticipating them to be among the best financially performing companies of 2021; BHP and Rio Tinto have been tipped to be the largest dividend payers in Europe for the year. But given that steel mills often have a lifetime of more than 20 years, investments made off the back of this cash flow will be key to the transformation of these companies – and indeed primary steelmaking – through to 2050. Such margins will be key to facilitating development in low carbon technologies for any new capacity, which is likely to hold a heavier price tag through early development.

In China, however, local steel makers operate with lower margins, and depend on higher output – which is now restricted – to cover their overheads. As these are less able to capitalize on the iron ore increase, profits are suffering; HBIS saw profits fall by a third in 2020, despite price increases. For these steel makers, it is harder to switch to pricier higher-quality ore supplies or to research lower-carbon production, allowing higher-quality South Korean and Japanese producers to have an advantage. Put simply, investors should avoid stocks and bonds issued by Chinese steelmakers.

With the first ‘green steel’ starting to trickle out from early pilot projects now – including the likes of the Hybrit initative – this sort of transformation is likely to start around 2025 and mature through the back end of the 2020s, before an explosive growth thereafter. With snowballing momentum, however, decarbonized steel production will become the new normal much faster than expected, leaving those that are unable to transition their operations on the scrap heap.

A similar phenomenon will likely impact mining on the whole. Strong demand from China has fueled a 90% rally in copper prices over the past year, with miners in Chile – the world’s largest producer by far – struggling to keep pace with production. Prices now sit at just under $10,000 per ton – again, nearing the record of $10,190 set in 2011.