So Japan, Taiwan, and South Korea have similar modern geopolitical history. Their GDP per capita metrics are basically similar, though Japan has a nominal advantage which should last until around 2027 and Taiwan’s PPP (purchasing parity power) metric is pushed up high by low costs of living including subsidized electricity.

The three are also all reliant on imported fossil fuels especially LNG, and aside from Japan’s Hokkaido they all have high population density and mountainous terrain, which limits onshore renewables. Most of Taiwan’s population lives on the western coastline, while the small fraction of the population which is indigenous rather than Chinese lives in the mountains of the eastern side.

All three countries turned against nuclear power after Fukushima. Japan’s political class has managed to delay and partly reverse the shutdown of its nuclear industry, while South Korea cancelled its nuclear plant pipeline allowing only the in-progress constructions of three new plants to continue alongside the existing fleet. Taiwan too has left its existing fleet running, but it cancelled the nation’s fourth nuclear plant, which was under development. Each decision was supported by a referendum, and the existing nuclear fleet is due for decommissioning in 2025.

That leaves offshore renewables as the main option for these countries’ future energy developments, and Taiwan has by far the easiest and best prospects with the Taiwan Straits’ 10-meters-per-second winds. 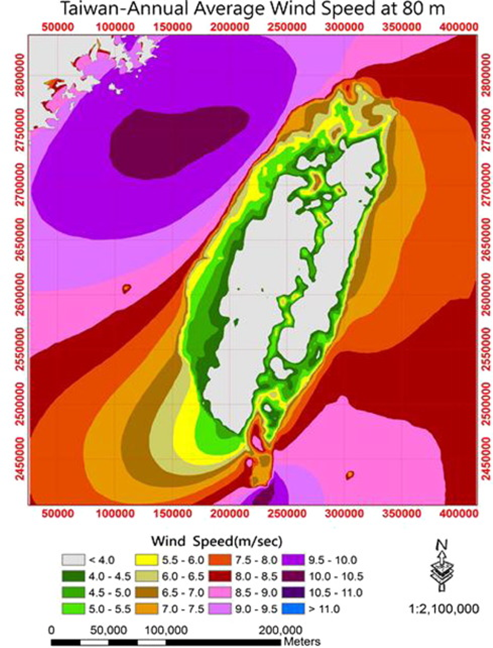 To continue the comparisons just a little further, South Korea and Japan’s broad-based manufacturing sectors need no introduction, while in Taiwan one product and one company has risen to global prominence.

The First World economy which grew over 6% in 2021

Taiwan Semiconductor Manufacturing Company (TSMC) has famously risen to over 50% global market share for microchips and as much as 90% for the most high-end products. Now that there is a chip shortage which has sent prices rocketing, integrated circuit exports rose to $114 billion in 2021, a third of exports and 15% of Taiwanese GDP – this includes smaller companies like MediaTek, but is mostly TSMC. Taiwan didn’t just grow fast in 2021, it even grew slightly in the pandemic-lockdown year of 2020.

Steep profits have seen other companies and governments worldwide decide to force their way into the sector or in Samsung’s case improve their position with new investments. The US House of Representatives will soon introduce a bill to boost federal spending on semiconductors, with a $52 billion boost already passed through the Senate last year. China’s smartphone manufacturers Xioami and Huawei have been putting most of the investments into microchip manufacturing of late. Samsung will build a $17 billion factory in Texas, and spent $33 billion on investments last year.

With the chip shortage far from over, Taiwan can look forward to 4% growth in 2022.

In November Taiwan’s power mix was 42.4% gas, 41% coal, 6.3% nuclear, 7% renewable, fuel oil 2.2%, and 1.1% pumped hydro. The scale of its coal imports has changed little for at least two decades, although five years ago Russia replaced Indonesia as the second largest source behind Australia.

Existing coal plants have faced legal complaints from local government lodged with utility Taipower; nuclear power will be ended by 2025; but a new LNG terminal was approved in December, and new gas plants are still being built courtesy of Siemens, GE and the like.

So renewables don’t yet have the field all to themselves, and with so much coal to replace and so little land availability, gas power has a longer prospective lifespan in Taiwan than in Western Europe. In fact, given offshore wind’s long lead times, a more swiftly decommissioned nuclear industry, and the lack of space compared to equally coal and gas dependent Australia, Taiwan is going to end up being the most polluting of the advanced economies, before it reaches net zero.

Despite the “quick and easy” option of natural gas being pushed with the Guantang LNG terminal winning approval in a referendum, the government has delayed its commissioning from 2023 to 2025 by requiring a half-kilometer jetty extension to be built to avoid damaging reefs. In the short term before offshore wind hits its full stride, Taiwan’s energy security will have been weakened a little.

Taiwan brought in a renewable Feed-in Tariff in 2009, which was followed by further power sector reform in 2017 under the Tsai Ing-Wen government, which has won re-election since. It was only that second legislation which granted renewables priority on the grid, but since then there has been plenty more work to do especially in making what limited free land there is available for renewable developments. The main focus for solar so far, again like South Korea and Japan, is small-scale rooftop installations, but there has also been deployment on tidal flats and agrivoltaics will have to become a major market segment soon.

For wind, it’s all about attracting the biggest European offshore developers to build complexes such as the Changhua and Yunlin projects which face typhoon winds during construction and are just as large as the complexes under development in the North Sea. While Taiwan is far friendlier to foreign corporate activity than Japan, it still has some irksome local content requirements.

Solar in particular has picked up consistently of late with the Feed-in-Tariffs available for it remaining at a high level of over $130 per MWh, and with further initiatives to make agricultural and other land available.

With a population density of 673 people per square kilometer, Taiwan has also produced this BIPV curiosity (see diagram below) recently, the Sun Rock building owned by state utility Taipower: 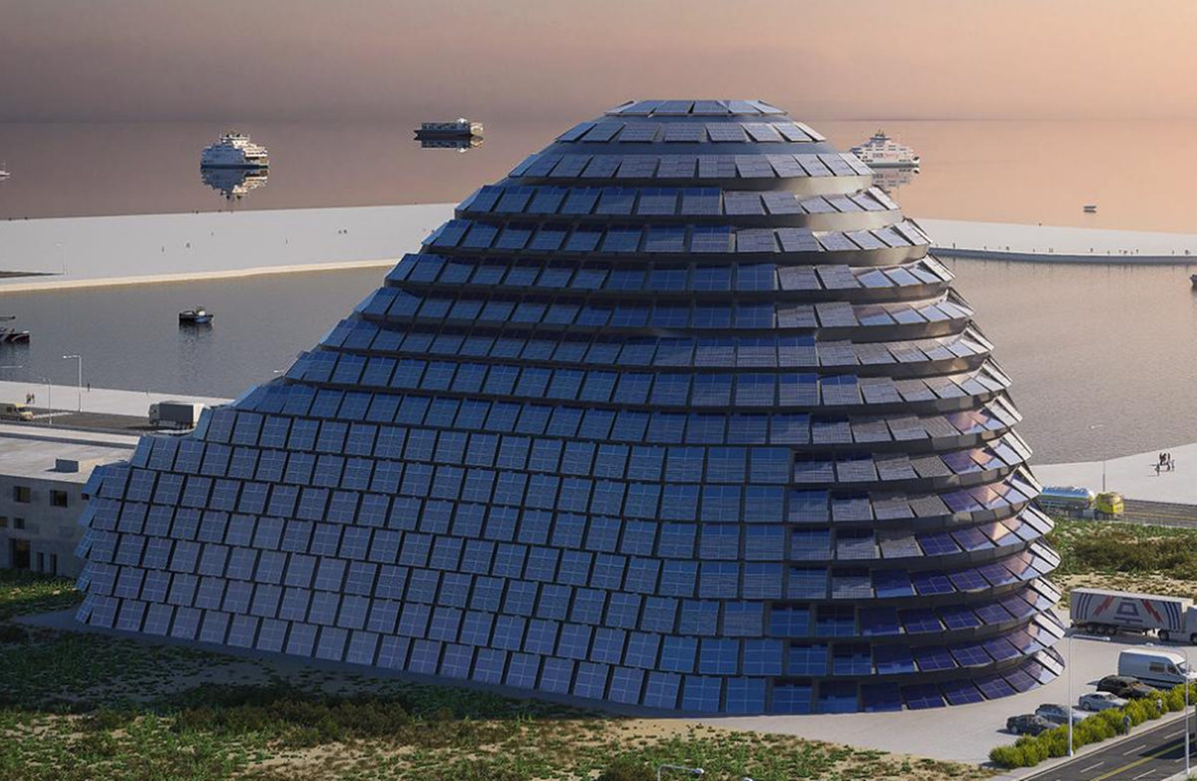 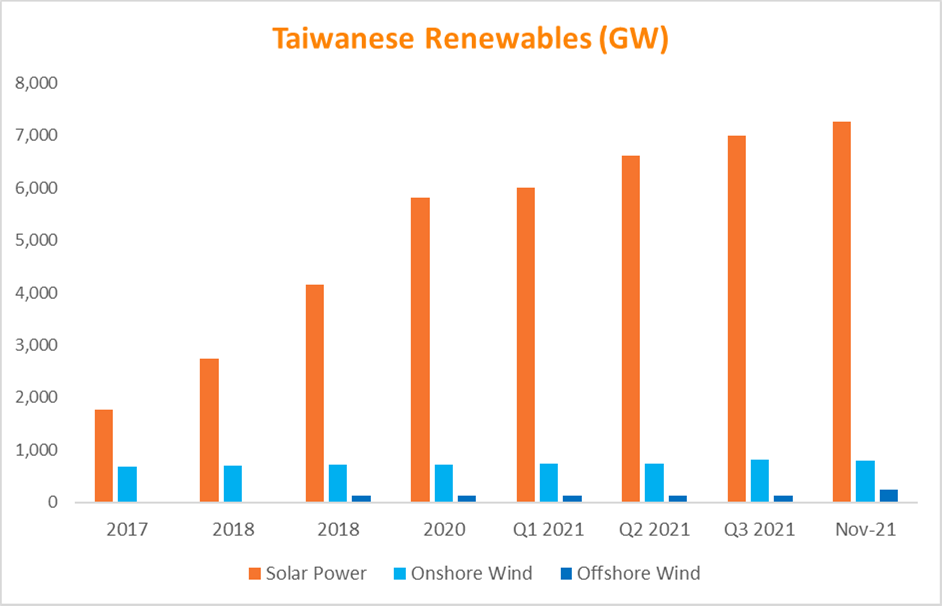 Surprisingly, 14 GW of the 20 GW solar is intended to come from ground-mounted installations, so rules over use of agricultural, forest, and aquaculture land (i.e. solar-fisher platforms) will have to be relaxed. In 2020 TSMC proposed the clearance of 230 hectares of Pingtung forest for a solar farm, causing a stir among environmentalists. That particular proposal appears to have fallen by the wayside.

The past year also saw Taiwan’s first energy storage on the grid, beginning with Tesla, with a follow up from Fluence. Taipower has raised its energy storage target from something trivial to 590 MWh by 2025, of which it will develop 160 MWh itself. But with New Horizons Ahead alone proposing 160 MW, 420 MWh across two projects, it is likely this target will be far exceeded.

Renewable energy will rise to 20% of the total mix by 2025 according to these plans, with natural gas rising to 50% and coal falling to 30%.