The Dutch government will repurpose swathes of natural gas infrastructure to produce the world’s first national hydrogen network by 2031. Such a plan may not be easily replicable in all markets, but it will continue to lay foundations for global hydrogen trade and a broader hydrogen economy.

The country’s minister for Climate and Energy, Rob Jetten, announced the strategy at the end of June, detailing the construction of a €750 million national transport network for hydrogen. Around 85% of the network will be composed of recycled natural gas pipelines, which will become available as the country’s demand for gas peaks between 2026 and 2028, according to Rethink Energy.

The plan aims to utilize part of the 20GW worth of wind farms planned or under construction in the Dutch North Sea by 2030, with 500 MW of electrolysis capacity to produce hydrogen in 2025 and 3.5 GW by 2030. The network will then connect major industrial hubs, build storage facilities and interconnectors with neighboring hydrogen networks.

Primary nodes to connect will include seaports and large industrial clusters that are looking to become hydrogen hubs in the future, as well as key locations for geological hydrogen storage. Connections with the German areas of Ruhr and Hamburg, as well as Belgium are also being planned to facilitate the future trading of hydrogen within Europe.

The first parts of the national network are hoping to be available in 2025, located in the north the country, along with the link to northern Germany. Several industry clusters in the IJmond and Rijnmond regions should also have segments of hydrogen pipeline in place, to be connected over the following years.

Developed by Gasunie – which is half owned by the Dutch government, and the other half split between Shell and ExxonMobil – the project will shift the company’s focus towards a TSO role in the country’s hydrogen sector, including the management of storage and imports.

With huge plans for hydrogen production at North Sea wind farms, it is also likely that Gasunie will become an offshore grid operator.

CEO of Gasunie, Han Fennema, said that “Gasunie is very positive about the hydrogen plans announced today by Minister Jetten. We believe that hydrogen will play a major role as the energy carrier of the future. We now start the construction of the public hydrogen network in the Netherlands, which will be a great boost for the transition towards a more sustainable energy system.” 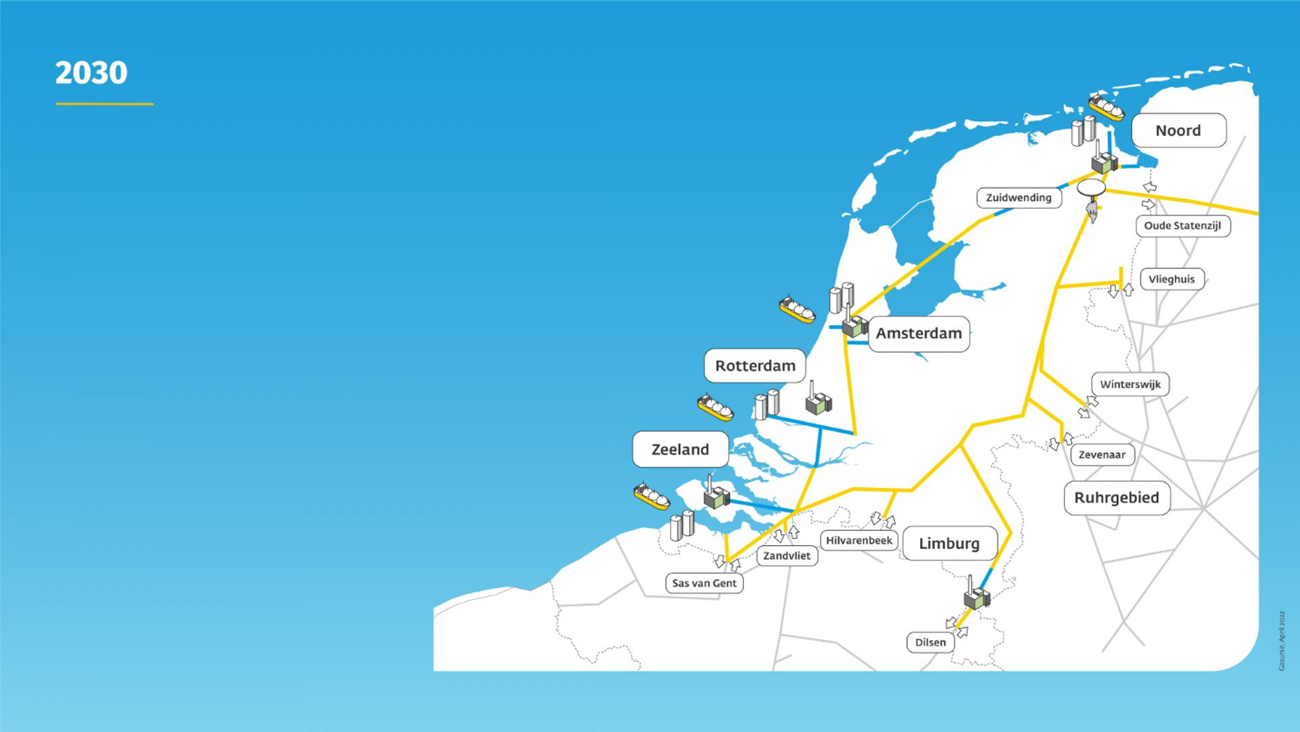 The use of old natural gas infrastructure also provides a much cheaper and agile route through development. Recent research from Irena has indicated that repurposed pipelines will be between 65% and 94% less costly than building new hydrogen-specific pipelines, largely due to the reduced amount of excavation work that is required.

Repurposing these pipes, which are made mostly of steel, can be achieved in most cases through the addition of new valves to alter the operating pressure. No compressors are needed, as the hydrogen will be delivered into the network at the pressure required. Gasunie claims to have done several tests to prove that this is possible, and already has a 12-kilometer repurposed pipeline in operation to the south of the Netherlands.

The Yara-Dow pipeline was commissioned in 2018, running between Dow Chemical Benelux’s facility in Terneuzen and Norwegian ammonia producer Yara’s facility in Sluiskil.

The common misconception is that the energy per unit volume of hydrogen – which is around one-third that of natural gas – will make it hard to deliver the same amount of energy through the existing grid. But hydrogen can be delivered at flow velocities of roughly three times higher, cancelling this out, and meaning that the reduction in energy transportation capacity is only marginal, due to a slight increase in pressure losses.

The logistical ease of converting such pipelines, in the Netherland’s case, is largely because Gasunie has managed to develop a “robust and modern” network for high pressure natural gas. It currently has seven parallel gas pipelines connecting industrial areas from the north to the south of the country.

As the demand for natural gas falls, and demand for hydrogen rises, the Netherlands can repurpose each of these pipelines one at a time, with minimum disruption to the country’s energy system.

Other countries, with more centralized approaches to gas distribution, will struggle with this approach. While they can blend hydrogen into existing gas pipelines up to a volume of 20%, anything above this requires a full upgrade to 100% hydrogen, and an elimination of natural gas from that pipeline.

So, for the Netherlands, blending can be ramped up to 14% of hydrogen, before one pipeline is converted to full hydrogen, and the rest shift back to 100% natural gas, and the process starts again.

In contrast, Italy, which has three parallel pipelines in its northeast region, would have to make a more sudden 33% switch to away from natural gas to hydrogen in its network. Poland and Germany are among other countries with a similar dilemma.

For these countries, a transition to a hydrogen will have to be different, and may require new pipelines. One option, however, is to try and increase 20% blending maximum. Siemens Energy published a report last year stating that other operational changes, including upgraded motors, turbines and piston compressors, can push the blending maximum above 40%, enabling a low rate of three-times greater than that needed for 100% natural gas. Deblending technology, such as that being developed by Costain, will also be required to separate hydrogen from natural gas for the end user within the network.