Wind power provided the largest chunk of Spain’s electricity in 2021, according to wind energy association AEE. Through the year, the country’s 28 GW onshore wind fleet registered provided more than 23% of the country’s total power. Overall, renewables achieved their best year record, producing more than 46% of all electricity in Spain, almost 10% more than in 2020.

California is hoping to increase its offshore wind infrastructure budget to $45 million for the 2022 to 2023 fiscal year, with eyes on creating an ‘Offshore Wind Energy Deployment Facility Improvement Program.’ The scheme comes as part of Governor Gavin Newsom’s $286 billion Blueprint California, and would aim to funnel money into projects in federal waters in areas of facility planning and development over the period. Projects that could benefit include the Humboldt Wind Energy Area, which could provide up to 1.6 GW of clean energy, following the release of BOEM’s draft environmental assessment in the region. The budget proposal also includes $100 million to advance the use and production of green hydrogen in the period, and a further $380 million between 2022 and 2024 for long duration storage projects.

EDF has announced the latest in a long line of delays for its Flamanville 3 nuclear reactor in France, with an additional €300 million added to the project’s cost. The project has been pushed back by an additional six months, having already been delayed by more than a decade, with fuel loading now scheduled for Q2 2023. Its estimated cost has now risen to €12.7 billion, which is more than four-times what was initially expected in first estimates made in 2004. The group claims that the main reason for delays was faulty delays, which should be fixed by the end of August.

EDF also announced this week that it will be winding down the operations of its Hunterston B project in the UK, after cracks were found in the core of its reactor. The project has been operating since 1976, and will cut the UK’s nuclear capacity by an eight when it is decommissioned. Subsequent closures at Hinkley Point B, Hartlepool 1, and Heysham 1 will see almost half of the country’s nuclear capacity come offline by 2025, placing an increased urgency on the country’s flagging renewables buildout. The UK’s nuclear output has already plunged to its lowest level since 1982, Carbon Brief analysis shows.

Shipping giant Maersk could become one of the world’s largest consumers of green hydrogen after its decision to purchase 12 methanol-fueled container vessels from Hyundai Heavy Industries. The ships will be delivered in 2024 or 2025, and will be powered using green methanol, which will either be produced using biogas or hydrogen combined with captured carbon dioxide.

Japan and Indonesia have signed an agreement to cooperate on hydrogen, ammonia, and carbon capture through their transition to clean energy. Japan, in particular, has been experimenting with hydrogen to displace natural gas and in replacing some coal with ammonia while the resource-poor country is trying to build global supply chains of potentially carbon-free future fuels.

The city of Beijing will install just 63 MW of rooftop solar in 2021, despite the residential segment rising to over 10 GW in 2021 nationally, with 541 MW in Shanghai alone. This is a fine example of how important varied local government policies are.

ABL Group has completed its feasibility study for asset manager Dragon Capital Group concerning energy storage co-located at solar projects in Vietnam. After a massive development of solar in 2020 due to an over-tuned Feed-in Tariff, the national grid has had to curtail a significant fraction of the new renewable energy. As with China there is no market mechanism to reward standalone energy storage installations, so perhaps Vietnam will likewise rely on co-located energy storage requirements for green energy projects.

China’s State Grid will begin work on ten UHV AC transmission lines and three UHV DC transmission lines in 2022, with a China Energy News reporter having learned that approvals have been expedited. During the 14th Five-Year Plan period of 2021 to 2025, 24 UHV AC lines and 14 UHV DC lines are planned to have been completed. A new investment figure of $60 billion for UHV expansion during that five-year period has been published, up from the $47 billion we reported last week. Compared to the 12th Five-Year Plan period, investment into China’s power grid will rise to $500 billion across the current five years, up from $300 billion in the 2011 to 2015 period.

Brazil has published a new Net Metering system which will be implemented from 2023 and would cover under-5 MW installations through to 2045. Law 14.300 comes as the country’s rooftop sector has surged thanks to other legislation, overtaking utility-scale solar under the Bolsonaro government.

The EIA predicts that the US will add 46.1 GW of utility-scale capacity in 2022, with 79% of it clean or renewable, as displayed below.  It should be noted that this does not include rooftop solar, which may come to a further 7 or 8 GW. 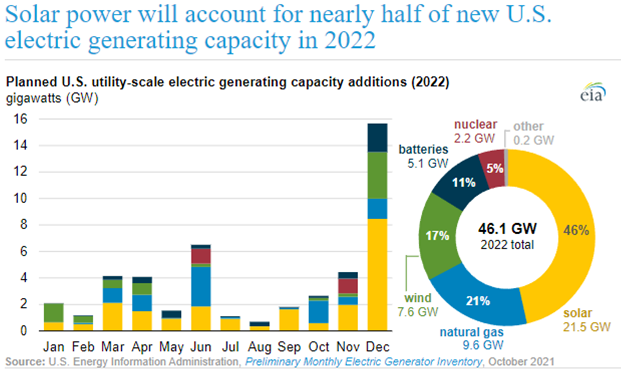 Germany’s new Green-SPD-FDP government has unveiled its plans to reach 20 GW of annual solar installations by 2028, up from 5.2 GW annually in 2021. A new Renewable Energy Law (EEG) will increase the size of government tenders, increase land availability via regulation, and making photovoltaics mandatory for new residential and commercial buildings. The government also plans to set aside 2% of land area for wind farms.

ExxonMobil has said it will buy a 49.9% stake in Norwegian biofuels specialist Biojet which makes lower-emissions biofuels and biofuel components from wood waste. The deal includes an offtake agreement for up to 3 million barrels per year. The company has plans for five facilities to produce biofuels and components and will begin commercial production to begin in 2025 at Follum, in Norway. So that’s what will happen to all the trees in Norway – bloody brilliant.

The Financial Times this week told how a Bill Gates-backed fund is  planning to invest as much as $15 billion across the US and Europe to subsidize technologies to help countries reach net zero emissions. It is called Breakthrough Energy Catalyst and it is backed by American Airlines, steel giant ArcelorMittal, financier BlackRock, US Bank of America, General Motors and the Boston Consulting Group, along with Microsoft. So far it raised $1.5 billion from philanthropists and industrials for direct air capture, green hydrogen, aviation fuel and energy storage technologies. Still two out of four are actually green – but then again Bill has always had a thing for climate engineering – it’s the part of him that plays god. Eventually the fund should raise $15 billion – don’t put your money in, it will be wasted.

The new Czech government says that it has plans to phase out coal by 2033 and will do this by increasing its investment in both nuclear and renewable energy. Today coal generates 50% of Czech electricity. Prime Minister Petr Fiala has changed tack dramatically from the previous government, which had no timeframe for stopping coal.

We think people who say that the Netflix film sensation “Don’t look Up,” was not really funny, kind of missed the point of the film., which was the extent to which people obsessing with government and finance can exclude any other consideration from their minds. It’s true it’s not funny and is clearly a parody of the last 20 years in climate action. It is about an asteroid heading for Earth that will wipe out life – which most vested interest fail to acknowledge to the point where looking up is seen as a betrayal, even as the asteroid becomes visible.

In the US this week investment firm Lafayette Square and Invenergy, a privately-held renewable energy firm have jointly launched Reactivate, a community solar platform which will provide capital, technical assistance, and dedicated executives to build and operate community solar projects, especially to low-to-moderate income communities.