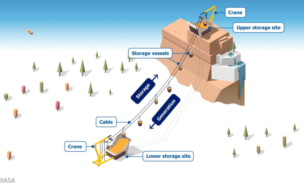 Analysts in the UK have highlighted the challenges in planting trees as a means of carbon capture. This follows a wave of pledges in the run up to a general election, with the Conservative Party aiming to plant 30 million more trees a year, and the Liberal Democrats promising 60 million. Forestry experts have responded to this, praising the ambition, but highlighting that careful planning will be required to find sufficient land.

Mountain Gravity Energy Storage has been proposed in the latest version of the journal Energy. Using existing chair-lift infrastructure, the idea claims that sand may be transported up the mountain at times of excess electricity production, which may be used to generate electricity for anywhere between five and 555 days. Prototypes have been generated since 2012, by companies such as Energy Cache, although projects struggled to prove their worth on a utility scale.

Octopus Group has launched a plan to open a renewables investment arm, which will buy and operate renewables assets. With the intention of raising £250 million in December’s float, the Renewables Infrastructure Trust has a forecast return of 3% in its first year, which is expected to rise to between 7% and 8% thereafter. Given it has no pedigree in investment we expect the worst.

The Ukraine probably isn’t the first country that springs to mind when renewables are mentioned, but has just reached a milestone of 1 GW installed capacity as part of plans to become a European leader in decarbonization. This follows the commissioning of the 100 MW Orlivska onshore wind farm.

China has started constructing two new Nuclear reactor units at the Changjiang project in Hainan. The $5.64 billion project is set to be commissioned in 2025 and 2026, bringing China’s nuclear capacity to 58 GW.

GCL System Integration and Powin Energy have partnered to deliver a ‘front-of-the-meter’ energy storage solution to Australia and Southeast Asia. GCL has supplied over 18 GW of solar power globally since 2015, while Powins claim a position as a world leading battery developer.

San Diego start-up NeoVolta has started the production of a $13,000 residential storage unit, hoping to compete with market leaders Tesla, LG Chem and Sonnen. The unit is capable of storing 14.4 kWh, discharging at a rate of 7.7 kW: Both greater than achieved by mainstream competitors.

Pakistan’s government has agreed terms for the development of 11 windfarms totaling a capacity of 560 MW. Financing will be supplied by the International Finance Corporation arm of the World Bank.

Global wind speeds have increased rapidly over the past decade, according to research published in Nature Climate Change. Following a ‘global stilling’ period between 1978 and 2010, where mean wind speeds fell by 2.3% per decade, wind speeds have bounced back at a rate three times greater. While the cause of this trend may be related to climate change, the increased wind speed is a good sign for wind energy developers, who will experience a concurrent rise in capacity factors. The study suggests that this rise in wind speed will see the amount of produced energy grow by around 37%.

Northland Power and Shizen Energy have agreed a partnership to develop offshore wind projects in Japan. The joint venture, called Chiba Offshore Wind, will be pursuing projects with a combined capacity of around 600 MW.

SunPower will sell 22 million shares of its common stock through an underwritten public offering. After spinning off its manufacturing business Maxeon last week, this is likely a move to consolidate, and fund loan repayments which are due in 2021.

California will stop purchasing vehicles from General Motors, Toyota and Fiat Chrysler as well as others who backed the move by the US administration to overturn California’s authority to regulate tailpipe emissions. California spent over $130 million on vehicles from these manufacturers between 2016 and 2018. The move is a retaliation to the Trump administration’s decisions to revoke California’s legal authority to specify tailpipe emission rules.

Los Angeles Department of Transportation has announced the largest single order of electric buses in US history, ordering 130 of BYD’s K7M electric buses. These will be built for the city’s public transportation system at a factory in Lancaster, California. The 22-seater bus will have a range of 150 miles and can be recharged in 3 hours.

The South Korean capital, Seoul, has announced a plan to deploy 1 GW of rooftop solar across the city. The new initiative will see PV solar on the roof of a million homes and public buildings by the end of 2022.

PG&E had to cut power to a further 50,000 Californian homes on Wednesday, due to risks of wildfire during dry and windy weather. The shutoffs affected fewer than expected, and far fewer than the mass blackouts seen in October when 730,000 were left without power.

French firm Neoen has contracted Tesla to expand the storage capacity of its Hornsdale Power Reserve in South Australia by 50%. The 100 MW/129 MWh lithium-ion battery will be expanded with an additional 50 MW/ 64.5 MWh of capacity using Tesla’s lithium-ion technology.

New Jersey, US, has more than doubled its offshore wind intentions, signing an executive order to back a goal of 7.5 GW capacity by 2035. This is a dramatic increase from the state’s previous 3.5 GW target and would see half of the state’s electricity come from offshore wind by the mid-2030s.

France has announced plans for a new 1 GW offshore wind farm off the coast of Normandy. The 80- turbine farm would be placed in a location such that wind and seabed conditions can allow for a competitive price according to the energy ministry, which is trying to reduce the country’s dependence on nuclear power.

EasyJet has claimed that it will become the world’s first major airline to be carbon neutral. The British airline announced on Tuesday that it will start offsetting the carbon emissions from all its flights, with an investment of £25 million per year. This offset is likely to take the form of tree planting or emission reduction technology.

Siemens Gamesa has responded to the growing cybersecurity threat in the renewables industry, partnering with Fortinet to provide an integrated solution “to address the unique security and connectivity requirements of operational technology networks.”