The €22 billion turnover gas leader, French Air Liquide, says it will put €125 million into a first at scale Air Separation Unit (ASU) to make oxygen, but also to act as a 40 MWh storage facility on the grid. It is deliberately placed close to industrials centers in the Netherlands to cut down on trucked gas deliveries. In the past it has talked about electrolyzing hydrogen using renewable energy, now it is talking about cheap renewables to extract Oxygen, Nitrogen and Argon straight out of the air. The new Air Separation Unit uses 10% less electricity than previous versions and operates at around 95% efficiency, and this particular one will have a production capacity of 2,200 tons of oxygen each day, and will be built in Port of Moerdijk in the Netherlands. When the company says that it is designed with its proprietary Alive technology, this is simply a way of putting production on oxygen on standby when the renewables need to feed the grid, and even converting liquid oxygen through the phase state back to gas, to generate extra electricity, and then switching back to high use of renewables for O2 manufacture when the grid has plenty of energy, maximizing the price renewables get for the 2 activities. It is very similar to how hydrogen electrolysis plants will work in the future. This new ASU will be operational in 2022. The new Air Separation Unit will produce oxygen, nitrogen, and argon for industrial, food, and medical markets and will be connected to Air Liquide’s pipeline network. Moerdijk is viewed as a strategic location to cut down on bulk truck deliveries – it should cut 400,000 km driven each year the company says.

The EU has passed its green stimulus package – with the majority of the content released as expected. Over the course of four days, the EU members settled on both a seven-year budget and a special pandemic-recovery package that earmarks a collective $630 billion for spending against climate change.

Electric vehicles incentives in Germany have led to some vehicles being accessed for free. Through state support, Autohaus Koenig has been able to lease the battery-powered Renault Zoe in a format that is completely covered by subsidies, with 3,000 enquiries about the offering since it was launched 20 days ago. Germany’s subsidies of as much as €9,000 per electric vehicle have also boosted sales for Carfellows, a German auto-trading website, about tenfold.

Brazil’s government has posted its first target for offshore wind, with a modest 16 GW of potential for 2050 according to energy minister Bento Albuquerque. The country currently has no wind capacity installed off its coast, but intends to include the technology in its plan to bring the combined total of wind and solar power to 195 GW by 2050, which will give renewables a 33% share in the country’s energy mix. Brazil’s current government is not famed for its climate ambition – far from it – and we expect that over the next few years, international pressure will see targets increased dramatically. The World Bank has previously identified that offshore wind could provide up to 1.2 TW of capacity off the coast (480 GW fixed-base and 748 GW floating), while Brazil’s energy planning agency EPE has estimated that the potential could be a more modest figure of 700 GW. Either way, there’s a lot of headroom that will be filled above the 16 GW target.

Enel has announced a plan to add 1 GW of storage to its renewable fleet in the US by 2022, starting with a renewables-plus-storage strategy in Texas. The Lily project will include 146 MW of solar power with a 50 MW battery and will add to Enel X’s current portfolio of 300 MW of energy storage. The strategic shift to collocated storage projects takes advantage of falling battery costs, extensions to the Investment Tax Credit and opportunities arising from FERC’s Order 841, which allows storage to compete with other power sources.

Aker ASA is hoping to acquire Norwegian project developer NBT for $340 million, with a primary bid submitted this week. This follows Aker’s plans to accelerate its presence in the wind sector, which has included a re-merger with Kvaerner. NBT is currently developing Europe’s largest onshore wind farm, along with China Electric Power – the 792.5 MW Zophia project.

IDTechEX has released a report where it identified copper-indium-gallium-diselenide (CIGS) as the Rockstar of the PV sector, after identifying that sales of the technology have grown fifty-fold in the past 10 years – the technology now represents 2% of global PV output. 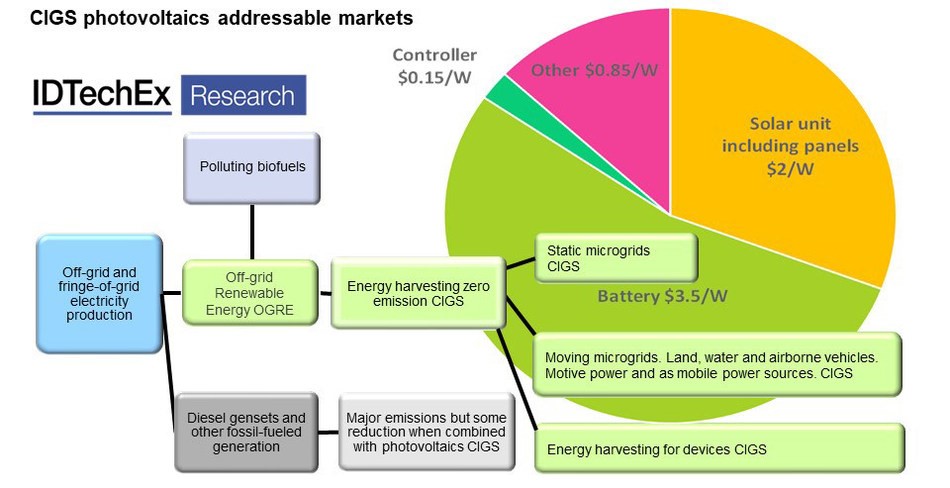 The Lithium-Ion battery market will reach a global worth of $129 billion by 2027, with a CAGR of 18% over the next 7 years, according to ResearchAndMarkets.com. Market growth will be driven by increase in use of various automobiles such as electric and hybrid vehicles, as well as rising product demand across the electrical and electronics industry, owing to a surge in penetration of smartphones and laptops. The Asia-Pacific region is anticipated to dominate the market during the entire forecast period.

The New York Public Service Commission has authorized utilities in the US to collect $701 million from consumers to fund a new electric vehicle charging program. It is expected that the initial funding will stimulate $1.5 billion in new investment and provide $2.6 billion in customer benefits over the next 10 years, with 50,000 charging plugs set to be deployed as well as 1,500 fast charging stations.

Repsol has signed up for a joint venture with Grupo Ibereolica Renovables to establish a 2.6 GW wind and solar portfolio in Chile, with Repsol injecting €168 million in return for a 50% stake. The joint venture will aim to bring 1.6 GW of capacity online in the country by 2025, followed by an additional 1 GW by 2030. This acquisition takes Repsol a step closer towards its short-term target for 7.5 GW of renewable capacity by 2025.

Airbus could launch a green hydrogen aircraft by the early 2030s, according to a senior executive from the group this week. VP of zero emissions technology Glenn Llewellyn identified that hydrogen has a “very attractive” outlook in aircrafts of up to 200 passengers, either through direct combustion of ammonia, or fuel cell technologies.

Tesla has delivered just 27 MW of residential solar through Q2 2020 – the worst performance it has seen since entering the market and down 7% from the same quarter last year.

UK-based energy storage start up Moixa has raised $6 million to fund its growth and expansion into Europe and Asia, following success in the Japanese market through partnership with Itochu. In Japan, the company’s AI-based GridShare software now supports 22,000 storage systems, up from 10,000 in November last year.

Poland has been given access to the EU’s net-zero fund to bailout its coal industry, despite not signing up the bloc’s 2050 decarbonization target or to a definitive coal phase out. Poland is currently set to receive a total of €125 million of EU grants over the next 7 years, some of which could make its way into the $33 million strategic reserve of hard coal that the country has implemented to prop up its coal mining industry.

China’s solar panel production has reached 59 GW for H1 2020, up 15.7% from a year ago, dwarfing figures for domestic installations, which were only up 0.9% to 11.5 GW, and export figures, which were down 1.8% to 35 GW. Prepare for dumping into Europe and the US and prepare for more debates around tariffs.

Shell Energy has launched a new solar-plus-storage tariff in the UK, under which customers can generate solar credits which can be used at a later date against their electricity bill, with a cap of £150 per customer. This will use Sonnen’s sonnenBatterie units – Shell acquired the Germany battery manufacturer last year.

Iberdrola has continued renewable investment through the pandemic, with $4.1 billion invested in the first half of this year, to a target of $10 billion in the whole year.

Microsoft has announced its largest green PPA yet – which will see Sol Systems build, own and operate a portfolio of 500 MW solar in the USA over the next few years.

Vikram Solar has signed an MoU with the southern Indian state of Tamil Nadu to develop a 3 GW wafer, cell and module factory over the next five years; at present the company has only 1.2 GW capability. India is ramping up tariffs on Chinese imports and last week ReNew Power announced its own 2 GW cell and module factory.

National Hydroelectric Power Company and Green Energy Development Corporation of Odisha have signed an MoU to develop 500 MW of floating solar in the Indian state of Odisha.

Britishvolt has signed an MoU to develop an up to 35 GWh battery manufacturing plant, the first of such scale in the country. A 200 MW solar plant will also be developed alongside. The UK is in a strong position in terms of relevant research, chemical and car industries, but has hitherto been passed over for manufacturing in favour of continental countries like Germany and Sweden.

Vast Solar is planning a $427 million ‘baseload’ solar thermal plant at Mount Isa, a mining town in the Australian state of Queensland. This North West Queensland Hybrid Power Project would combine 60 MW PV solar, 52 MW 10-minute battery storage, and a 50 MW CSP element, to supply an isolated rural grid. Even at $427 million, this will be competitive with the existing natural gas generation the town uses, and could be complete in 2023. Vast Solar has previously run a 1 MW pilot CSP project at the site.

Ukraine’s parliament has adopted Draft Law 3658, defining curtailment and solar payment reductions at a level lower than had previously been feared.