Thermal batteries to improve efficiency on route to net-zero industry 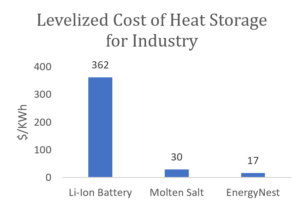 Thermal batteries could squeeze molten-salt technology out of the energy storage market, according to start-up EnergyNest. Rather than targeting the space that batteries currently occupy in storing electricity, the company’s technology will primarily aim to tackle decarbonization through improving the management of process heat within energy-intensive industries.

Two weeks ago, EnergyNest first popped up on Rethink Energy’s radar, after signing a deal with Austrian brickmaker Seftenbacher to develop a ‘Thermal Battery’ to replace the use of natural gas within the one of the company’s production facilities. With a burgeoning trend of heavy industry companies making ‘net-zero’ promises – we spoke to EnergyNest CEO Christian Thiel to see where thermal batteries fit within this decarbonization.

Described as a Thermal Battery, EnergyNest’s technology is solid-state, modular and with no moving parts, claiming a scalable and low-cost method of storing heat for weeks at a time. Thiel claims that the company can do this for a fraction of the cost of current storage methods, with a levelized cost of storage of around $15 per MWh equivalent.

The technology operates by using a high temperature heat transfer fluid passing through a piped structure, to transfer thermal energy into the systems Heatcrete material – where it is stored. By inserting heat into the bottom of the structure, it may be released at a controlled outlet at the top, if and when it is needed by the customer. Using this Heatcrete, the temperature loss within the system is reportedly only between 1% and 2% per 24-hour period. Projects can also be scaled to any theoretical storage capacity by adding modules, although Thiel highlights that the system is most suited to daily storage – where customers use one full charge/discharge cycle per day.

Thiel was keen to stress that while the company advertises applications of storing heat for use in electricity production, this is not the future that the company sees for itself. The company is aware that Lithium-Ion batteries fill this part of the storage market fairly well, but cites the lack of efficiency in turning heat into electricity, storing it in a battery, before turning it into heat again for use – which is where thermal batteries storing heat directly have an advantage.

Storing heat directly in thermal batteries can cut industry emissions through a number of ways including; enhanced waste heat recovery, where heat is reused to improve overall cycle efficiency; as well as balancing the supply and demand from renewable sources to reduced dependency on fossil fuels like natural gas by over 10%.

To reach a decarbonized economy, people often overlook the heat required for industry, and focus purely on electricity production. However, 20% of global energy demand is attributed to ‘energy-intensive industry’, with industries from steelmaking to beverage production requiring vast amounts of process heat. Thermal batteries can capture and store heat from a source of any significant temperature, with usual operating temperatures often reduced to a region of between 200 and 450 degrees Celsius.

With EnergyNest most suited to daily storage, the company has identified itself as an ideal partner to concentrated solar power (CSP) at individual industrial sites, which it is treating as one of its key routes-to-market.

The CSP market has gone fairly quiet, with American players such as SolarReserve vanishing from the public domain in January this year, after losing its only income-generating contract in its home country. This has left just one CSP company (BrightSource) in the US market – despite it being the place where CSPs were born – with the likes of eSolar and GlassPoint also unable to sustain early momentum from 2017.

But EnergyNest points to a potential resurgence in areas of high solar irradiation and industry activity such as North Africa and UAE. The company recently signed a deal with Italian oil and gas major Eni to deliver a thermal battery and micro turbine for electricity generation to complement its CSP plant at the Gela refinery.

Along with the project with Seftenbacher, these two projects are the only two in current development, although Thiel indicated that the company’s pipeline now has an additional 5 projects, most of which he couldn’t disclose, but one including an enhanced waste recovery system to buffer the energy losses at the Sloe natural gas plant in the Netherlands.

Another avenue which the company is hoping to capitalize on is industry-wide electrification and preventing the curtailment of renewables. Domestic and commercial heating looking set to steer away from natural gas, with climate change ministers in the UK suggesting this week that natural gas boilers should be banned in the country by 2050. With the cost of renewables falling and their abundance increasing rapidly, EnergyNest believes that excess generated electricity can be captured and then distributed as heat for buildings.

With new projects and markets set to emerge, the company is looking to raise some equity this month and is currently in due diligence stages with 2 separate investment groups.

EnergyNest develops all of its design work and software in house, following some early stage collaboration with academic institutions. However, as a small team of 14, it has looked upstream for the physical development of its EnergyNest modules and has partnered with the likes of HeidelburgCement for the provision of its Heatcrete; TSK for engineering; as well as Siemens for project identification.

With a giant like Siemens onboard, we probed Thiel about the potential for an acquisition, as the conglomerate creates its pure play energy division later this year. EnergyNest is confident that it can go at it alone, without limiting itself to project development solely through Siemens. This is in part due to the intellectual property held by the company, with 7 individual patents surrounding the system design, technology and Heatcrete material.

This Heatcrete material is therefore a trade secret, likened by Thiel to a coca-cola recipe – although it vaguely consists of ~75% Quartzite and ~25% Portland Cement. Using carbon-intensive components such as steel and cement, we also questioned the carbon footprint through production. However, EnergyNest claims that the reductions seen at a project level means that the system essentially offsets its own carbon footprint within 3 weeks of operation.

Currently the future of thermal storage is uncertain. As far as direct storage of heat goes, molten salt is the main direct competitor to the thermal batteries being developed by EnergyNest, although Siemens Gamesa has developed its own “hot rocks” solution as well. In molten salt, heat causes solid salts to be liquified and stored in a similar manner to EnergyNest’s batteries. However, Thiel claims that the EnergyNest system is more economically deployed at a smaller scale than molten salt and has greater potential in terms of cost reduction due to the level of simplicity associated with no phase-changes within the system. If you let the salt solidify again, the energy cost of re-liquidizing it is enormous.

Green hydrogen is not set to enter the market at scale for the next few years, and technology such as that at EnergyNest appears well placed to make early waves as global industries make the transition to clean energy. While green hydrogen will somewhat compete with thermal storage when it emerges, EnergyNest’s market position is adaptable. At this point, rather than directly providing green-heating from renewables, the thermal battery technology will be able to revert to its efficiency saving methods which it has developed through early work with natural gas.

The biggest issue we have with thermal systems is where they are too large and bulky to partner with smaller industrial processes, or to distribute to where office and district heating systems reside, and the EnergyNest system seems to pass this test of portability, being the size of shipping containers.