Engineers from MIT have created a new heat engine with a greater efficiency than the steam turbines that have created the world’s power for centuries. With no moving parts, the system’s ability to turn heat into electricity could provide a crucial add-on component to improve the overall efficiency of thermal battery systems.

Published in the journal Nature, latest demonstrations of the thermophotovoltaic (TPV) cell have seen it convert heat into electricity with an efficiency of over 40% – surpassing the 35% typically seen in traditional steam turbines, as limited by thermodynamic principles. With the main parts of the system all tested separately, research now aims to demonstrate a fully operational system, which can be scaled up to provide low-cost renewable energy. 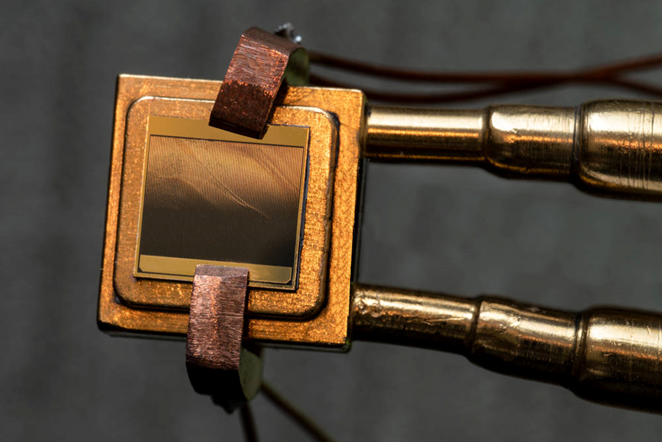 The design of the TPV cell allows it to capture high-energy photons from a heat source of between 1,900 and 2,400 degrees Celsius – a temperature rarely seen in the emerging renewable energy system. However, proposals for grid-scale thermal batteries – such as those being developed by the likes of Malta and Azelio – could see the technology adapted when converting stored heat back into electricity.

Such thermal energy storage offerings offer a huge amount of flexibility in their ability to provide either heat of electricity – largely in an industrial or district heating setting. While electricity produced using renewable energy sources can be converted to heat at nearly 100%, the overall round-trip efficiency of storing power for the grid is plagued by the low efficiencies of steam turbines converting heat back into electricity. Malta has tried to get around this by powering a heat pump, with an efficiency of 300%, as the input into the energy storage system, which could theoretically bring the practical efficiency to a competitive range with lithium ion batteries.

“Thermophotovoltaic cells were the last key step toward demonstrating that thermal batteries are a viable concept,” said Asegun Henry of MIT’s Department of Mechanical Engineering. “This is an absolutely critical step on the path to proliferate renewable energy and get to a fully decarbonized grid.”

The researchers cite the fact that more than 90% of the world’s electricity comes from sources of heat (coal, natural gas, nuclear, and CSP), and that steam turbines have been the industrial standard for converting such heat sources into electricity for well over a century.

While efficiencies of 60% are possible in the highest efficiency turbines, limited by the Carnot cycle, achieving these high efficiencies requires high temperatures. At temperatures beyond 2,000 degrees Celsius, the moving parts of steam turbines start to fail. Solid-state converters, on the other hand, can operate at higher temperatures with lower maintenance costs.

Prior to MIT’s demonstrations, the highest efficiency seen from TPV cells was 32%, with most systems sitting closer to 20%. This limitation, according to the researchers, was due to the cell being made from materials with a low-bandgap – only capturing a small number of low-energy photons, at lower temperatures, and therefore converting energy less efficiently.

Much like solar cells, TPV cells can be made from semiconducting materials with various bandgaps. Referring to the gap between the material’s valence band and its conduction band, photons of the corresponding energy can be absorbed by the material, displacing an electron that moves across the bandgap to generate electricity. MIT’s recent success has come from capturing higher energy photons from a higher temperature heat source, using higher-bandgap materials, multiple junctions, and multiple material layers.

In its current iteration, the cell is composed of three layers. A high-bandgap alloy, followed by a lower-bandgap alloy, and then a mirror-like layer of gold. This structure allows for photons of varying energy levels to be absorbed, and then reflected back through the layers to minimize the amount of wasted heat.

So far, the tested cell only measures one square centimeter; for a grid-scale thermal battery system, TPV cells would have to scale to nearly 100 square meters. The MIT team suggests that these would operate in climate-controlled warehouses, pulling power from thermal energy reserves. It also suggests that the infrastructure for making large-scale photovoltaics in the solar sector could be harnessed to rapidly achieve economies of scale for TPV manufacturing.