The UK has outlined a vision to power every home in the country with offshore wind by 2030. This means nearly quadrupling the 11.1 GW of capacity today to 40 GW, up from the country’s previous target of 30 GW, as PM Boris Johnson aims to make the UK ‘the Saudi Arabia of wind.’

Announced at the Conservative party conference on Tuesday, this came along with a package of £160 million for the necessary upgrades to ports and factories for the country’s supply chain, promising to create 2,000 jobs in construction and 60,000 more throughout the industry. This all comes as part of a 10-point plan for the UK to build back greener, following the Covid-19 pandemic.

Rethink Energy has previously forecast that the UK would reach a capacity of 32 GW by 2030, and admittedly, this is probably an underestimate. However, while the 40 GW figure has been floating around policymakers for a long time, ten years is a short time in the offshore wind sector. The government needs to follow up this lip service with concrete action, and soon.

The lead time between announcing a lease and an offshore wind entering operation in the UK is typically between 10 and 12 years, and with permitting delays impacting several project in early stages of development, the success of this 40 GW target will depend on how the UK improves its project approval rate.

According to our database, the UK currently has 10.4 GW of completed projects off its shores, with Hornsea One and East Anglia One currently in partial generation stages. The government is now set to double the amount of capacity awarded in next year’s CfD Round 4 auction, meaning that as much as 12 GW could be awarded of the 15.7 GW of projects in pre-consent stages. With the deadline for project completion likely to be in 2027, the UK could realistically storm past our 32 GW figure 3 years ahead of time.

Any further capacity by 2030 will have to come from the accelerated development of the 7 GW up for grabs in the Crown Estate’s Offshore Wind Leasing Round 4, and 10 GW from the upcoming ScotWind lease, which will compete within the following round of auctions, most likely in 2023. 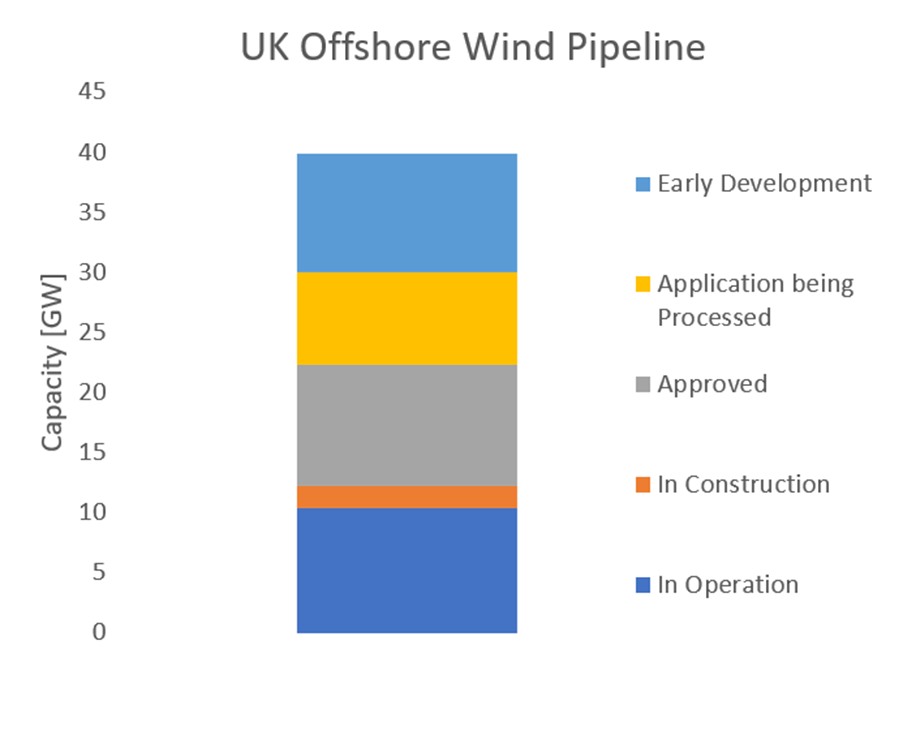 To minimize project lead time, the £160 million announced will be used to boost the development capacity of ports and infrastructure in communities like Teesside and Humber in Northern England, along with factories and facilities across the supply chain. Key beneficiaries could be MHI Vestas, which makes blades on the south of England, and Siemens Gamesa which has a blade facility in Hull on the North Sea coast.

While the £160 million figure appears modest in a market where Capex requirements are over £2 billion per GW, the injection of funding is more of a statement of support and a minor leg up for the supply chain, in a market where investor appetite remains strong. It’s also likely to be a measure to artificially boost job creation, as the country’s unemployment rate starts to climb for the first time in nearly 10 years.

For the first time, the UK has also set a concrete 1 GW target for floating wind by 2030, with Ideol’s 1.4 GW project in Scotland as a likely candidate for approval and boosted support in the upcoming CfD consultation.

The UK will however have to overcome the hurdles it faces in transmission and consenting. Several major projects have already faced delays in securing permits, with Orsted’s 2.4 GW Hornsea 2, still awaiting final consent after failing to resolve a bird conservation issue, and the 340 MW Thanet Extension was actually rejected due to concerns around the impact on marine navigation, shipping and ports in the area.

NREL agrees with us, suggests floating solar should be huge
Russia opens door for low cost renewables in subsidy reform