The Energy Regulator in the US has just published figures which show a dramatic about turn in the approach of energy suppliers – dumping Coal and Nuclear in favor of renewables – wind and solar, while gas remains strong.

The Federal Energy Regulatory Commission in the US is the agency which regulates transmission and wholesale sale of electricity and natural gas, and regularly publishes the intent of energy suppliers on plant retirements as part of its Energy Infrastructure Update.

It offers a monthly update and although not much has changed from last month, coal has announced 5 more plant retirements planned by June 2022, totaling 4 GW of electrical energy. Gas, wind and solar, are pretty much as they have been throughout this year – with renewables clearly on the up, but more gas retirements that many would expect, although the dominant fossil fuel resource being built out continues to be Natural Gas turbines.

This is probably not the picture that you would expect from a government hell bent on keeping coal in high production. In fact if you go back a year, this represents a fall from 77 GW of natural gas planned, to just 59 GW, a fall of 14 GW, and a rise from 146 GW of renewables to 184 GW, so momentum is building.

If all of these renewables actually get built by June 2022, that would represent a rise from the average rate over the past few years of solar from 8.4 GW in the US, to around 21 GW; and for Wind from 7 GW in a year to an average of 25 GW. This has been rising as a development pipeline for some time.

The latest Energy Infrastructure Update was in fact for May, but was only published on July 5 – clearly news that it was trying to hide around the July 4th celebrations. Nuclear retirements have also been on the rise during that time also.

As more Natural Gas installations are challenged at the state level, in states which have promised to lower emissions drastically, they will end up being replaced with renewables, so we expect to see the natural gas project numbers begin to fall. But so far this has not materialized. 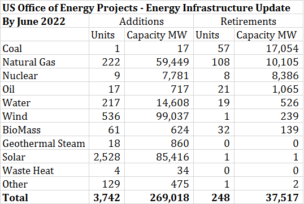