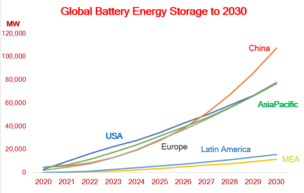 The take-off in energy storage in the US is so steep, that in the past few weeks alone, enough utilities have committed to projects so that the market will double this year, despite coronavirus, and double again next year. This is according to a new report out from Rethink Energy entitled, “USA flying start triggers rush for Energy Storage leadership,” and subtitled as a global battery energy storage forecast to 2030.

This concludes that Battery Energy Storage (BES) will have a ten year CAGR in excess of 44.8%. Markets do not grow much faster than that. More details of the report can be found here.

The numbers provided in the report are mostly in GW (Giga Watts), because much of this market is in 4 hour chunks of battery, so this translates to 1,462 GWh of battery cells or 365.5 GW of nameplate storage. Before this year there was just 6.9 GW of BES globally with just 1.1 GW in the US.

But from now until 2024 it is the USA which takes center stage, developing 27.7 GW by that time. You would expect China to slowly come into its own through pure scale, but it will not really accelerate until late in the cycle, and go past the US in around 2026. By 2030 china will have 107 Gw installed, and the US, Europe and the rest of Asia Pacific will each have around 77 GW.

The reason for the “Gold Rush” in energy storage is quite simply because there are few developments more profitable in energy right now, especially in markets where companies have already invested heavily in solar or wind.

The Battery Energy Storage (BES) market, made up almost entirely of lithium ion based technology, has been completely under-forecast throughout the run up to the 2020s. Its sudden emergence on the scene, in substantial installation sizes, has only just begun, mostly triggered by US utilities acting from climate ambition, perversely (compared to Federal Government), and led by a number of the larger US States.

Forecasters in the past have been aware of the growing US pipeline, and as such have under-forecast battery energy storage outside the US, which is running perhaps 12 to 18 months behind the sudden surge in the US market. This report hopes to correct that, by showing that outside the US, in the ten year time frame, momentum will build in four key markets – China, the US, Europe and the rest of AsiaPac.

Europe, especially in the UK and Germany, is equally ready for the onset of the BES market, but we expect it to move more slowly due to cumbersome regulatory environments, which have not moved to stay ahead of the BES market, and because of slower investment cycles.