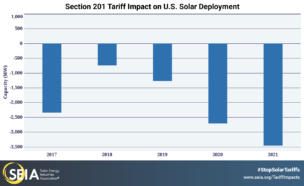 Solar tariffs have already caused oceans of economic harm, even before the US imposed them, with the European Union enforcing a minimum import price for solar panels for a number of years, killing the economic equation that had seen entrepreneurs jump on the solar bandwagon and install them on residential rooftops. We calculated that at least 100,000 jobs were lost in Europe, while protecting around 3,000 German jobs in solar manufacture.

Now the US Solar Energy Industries Association (SEIA) has placed a number of the jobs lost to the US economy at 62,000, up until the end of 2021, and says that it has also killed off $19 billion in investment and cut solar output by 10.5 GW. In our view these are reasonable numbers. The coal extraction only employs 50,000 employees, so it is the equivalent of losing all the US coal mining jobs and some.

The analysis comes as the midterm review process for the tariffs begins at the US International Trade Commission on Dec. 5, and covers tariff impacts from the beginning of the 2017 trade complaint by Suniva through the end of the tariff lifecycle in 2021.

“Solar was the first industry to be hit with this administration’s tariff policy, and now we’re feeling the impacts that we warned against two years ago,” said Abigail Ross Hopper, president and CEO of the Solar Energy Industries Association. “This stark data should be the predicate for removing harmful tariffs and allowing solar to fairly compete and continue creating jobs for Americans.”

It also puts the number of 26 metric tons of carbon emissions due to the 10.5 GW solar installations that have been cancelled, enough to power 1.8 million homes. The top line is $10.5 million a day in unrealized economic activity.

The SEIA goes on to say that for every job saved by the tariffs, 31 jobs are lost and so is $9.5 million in investment and it singles out Alabama, Nebraska, Kansas and the Dakotas as regions suffering the most, because here the entire solar market will not get off the ground because tariffs make solar uncompetitive.

Why would the International Trade Commission when it reviews this shortly, not recommend to Mr. Trump that what he does instead is cancel the tariffs, and uses all the money that has come in so far from them to retrain all the out of work coal miners and plant workers, to install solar – and have a net positive effect on the economy.

“Solar was the first industry to be hit with this administration’s tariff policy, and now we’re feeling the impacts that we warned against two years ago,” Abigail Ross Hopper, president of SEIA, said in a statement.

What the US also needs to do is take research into solar panels to the next level, overtake the Chinese panel and module makers and give the industry a reason to shift to home grown panel designs, and then export this technology in competition with China. At present most of the panels installed in the US are made in China.

All of these numbers however may become irrelevant in a year anyway, as solar panel prices have continued to fall, due partly to the US (2nd largest market) imposing tariffs, but mostly because China (the no.1 market) has only taken 50% of the panels it took last year, which have both triggered over-supply. The reaction of the Chinese panel makers has been to stimulate massive market increases elsewhere in places like Vietnam and Spain.

Today US panels prices remain the highest in the world, but soon the price falls will counteract the tariffs.

In a separate story a survey shows that the majority of Americans want to extend the tax incentives for installing any form of clean energy but mostly solar.

Research firm Global Strategy Group found 89% of voters believe that tax credits are an effective tool to combat climate change, made up of 95% of Democrats and 83% of Republicans. Which suggests that a cote in the near future on extending these credits may well find enough support to get through, even prior to the presidential election.

Jinko maintains its PV edge, among the Chinese giants of solar
Tower makers in best place to slash costs for floating wind