All over the world each country looks at home heat entirely differently – this is because their temperature ranges are so different, so while Japan seems to have deep penetration in its market for heat pump based home heating, it is because temperatures on average are way above those in Northern Europe.

Habitually the heat pump is actually used in Japan to make individual rooms cool in Summer, and for a few weeks, one room at a time, warm in winter. The UK, the Nordics, and much of western Europe cannot go the same route as Japan, and the worst instances are the UK and the Netherlands which are addicted to gas central heating to the tune of 85% to 89% of all homes. Both have fallen foul of the 1970s enthusiastic embrace of North Sea gas, which slowly saw all home heating switch to gas.

With this in mind, a great deal of fuss was made over the announcement this week of a high temperature heat pump which can simply replace a gas boiler, from Vattenfall Dutch equipment subsidiary Feenstra.

At present the process for the UK is to put a heater in most rooms, powered from an outdoor sizeable heat pump, but using this approach leaves hot water out of the equation. Warm air is pushed out from what looks like air conditioners, which builders locate high up, as is the tradition with air conditioning, where the cold air falls. In winter this makes no sense, as warm air rises, and the warmer air stays above the people it is supposed to warm – which is why gas central heating comes from ground based radiators.

This typically leads to a lot more costs, insulation for instance, and underfloor heating pipes as well, and it takes a while for each room to heat up, and then you must use a separate heater to heat water for bathing, sometimes driven by a separate heat pump. All of the radiators have to be removed, and everything needs to be made good, and many home owners who have gone down this route remain unhappy in winter.

So if a straight swap can be made for a conventional gas boiler, which heats to above 65°C this means lower costs and happier customers. This will also be true in North America and all of Northern Europe.

This is, of course ludicrous. Any government that truly wanted to make short work of its home heat problem in the Northern Hemisphere, could have called on a local industrial (in the UK, say Dyson perhaps) and tell them if they can come up with a high temperature heat pump below a certain price, they can be guaranteed a set percentage of about 20 million sales. British Gas is supposed to be doing something like this through its heat pump trials, but why would anyone allow the gas supplier to dominate proceedings, since it only wants things to stay as they are. British Gas engineers constantly dole out advice like “heat pumps are not quite there yet, they can’t heat your water as well.”

No price had yet appeared next to these new high temperature heat pumps, but they could easily sell for about $6,000 and still find customers.

Feenstra heat pumps will be made available initially in the Netherlands and then distributed further afield from there.

Recently news services in the UK have started lampooning heat pumps, and the UK government strategy for home heat, based largely on hugely high prices for heat pumps and a belief that they simply don’t work. A recent survey of 782 homes by the  Department for Business, Energy and Industrial Strategy (BEIS) found that all UK homes are suitable for heat pumps, and cited high temperature heat pumps as one of four potential solutions. 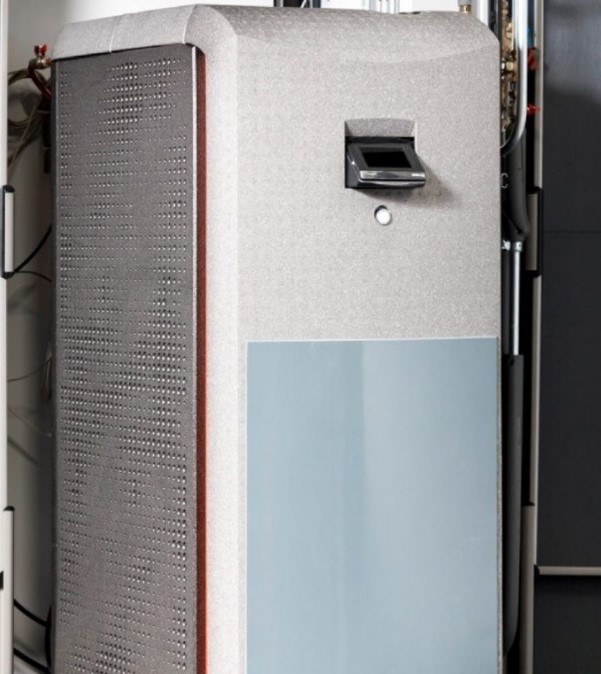 Mark Anderson, Commercial and Development Director at Vattenfall Heat UK said, “The high temperature heat pump solution is innovative, simple to install and could be the solution to help decarbonize homes in the UK that are heated using traditional gas boilers.” 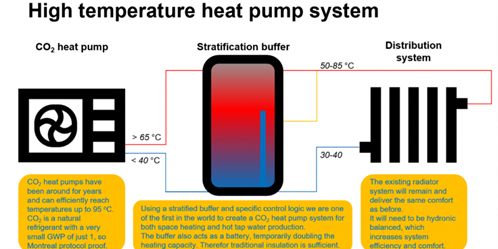