WBA describes WiFi sensing as a “new and rapidly developing technology” although we are cautious of both choices of descriptive words. WiFi sensing, or detection, isn’t all that new, and the potential market size is most definitely dubious.

Manipulating WiFi signals for sensing objects was conceptualized about a decade ago in academic circles. The first proof of concept product with motion detection algorithms then arrived in 2017, from Cognitive.

It took two more years for Faultline’s attention to be captured, when Israeli WiFi chipset maker Celeno launched an eyebrow-raising offering in 2019 to replace physical cameras and sensors with WiFi-based monitoring for home security and even TV personalization purposes.

While home security is the thrust of WiFi sensing and represents the most rational business case, the promise of applying this technology to TV is the real reason why Faultline has been following the WiFi sensing space.

Unfortunately, the latest WBA documentation does not dive into business cases, so there are zero mentions of possible media applications for WiFi sensing technology on this occasion. The document instead focuses on test methodology and performance metrics. 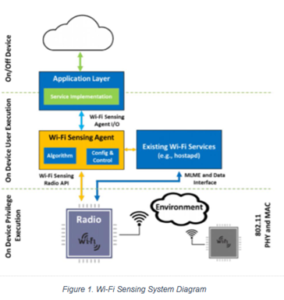 For instance, the paper notes the importance of building and summarizing application knowledge related to testing these capabilities as they emerge, while remaining relevant as new MAC/PHY standards are introduced.

The focus of testing is at the application layer, outlining a set of KPI metrics that may be used to evaluate the performance of WiFi sensing technology.

These range from a basic sensing application like Home Monitoring, implemented using existing WiFi standards, WiFi hardware, and extra sensing equipment, with updates delivered through a mobile app, for example.Not only that, but the paper claims that WiFi sensing may provide better coverage with fewer devices than optical sensors, as WiFi sensing does not require line-of-sight.

This could be single-AP or multi-AP, with each AP able to run its own WiFi sensing agent to extend the sensing network in mesh WiFi topologies, where Channel State Information (CSI) from wireless backhaul connections formed between each AP may also be used to detect motion.

WiFi Doppler is described as employing standard WiFi packets in combination with the Doppler effect to accurately characterize and represent complex motions and movements.At the time of launch, around summer 2019, Celeno told us that its plans to apply WiFi sensing technology to deliver personalized TV experiences and targeted advertising were broadly conceptual. The company explained it would be able to label the viewer as child or parent, as well as analyze if there are no viewers, one viewer, two viewers or more.

The idea was help to personalize viewing experiences, as well as help advertisers measure their exposure, although the radio silence on this front suggests this business case has been sidelined. Doppler imaging is not detecting body contours and faces, but rather analyzing the movements – hence being marketed as less intrusive to privacy compared to cameras.

The idea is to link WiFi Doppler up to a cloud-based platform with security and personalization functionalities, presumably of an operator’s choice, which could ping alerts directly to a smartphone app or alert the authorities, for example.

Celeno was acquired by Renesas Electronics in late 2021, although Celeno still offers the WiFi Doppler product, named after the Doppler effect which describes changes in frequency or wavelength of a wave in relation to an observer who is moving relative to the wave source.

Circling back to the report, plenty of emphasis is placed on exploring the impact of WiFi sensing applications on home WiFi connections. In the absence of a standard protocol for how WiFi measurements are performed, MAC and PHY layer implementation differences will likely cause variations across vendor chipsets.

The WBA advises that wireless resource usage is not just MAC and PHY layer dependent, as the sensing algorithm and application will have constraints that must be met. Therefore, it is logical to have a KPI available to help measure and evaluate the given trade-offs as a result of potential wireless resource implications. This dovetails with KPIs for LAN data usage, broadband date usage, and local computational resources.

Above all else, WiFi sensing needs to be embedded in mainstream silicon in order to take off. Companies like Qualcomm, Broadcom, MaxLinear, Onsemi, Celeno, and Cognitive, have all tried to coalesce around this technology, but ultimately have all implemented the intricacies of WiFi sensing in slightly different ways, due to the absence of standardization.

WBA plans to have a WiFi sensing standard completed by 2024.