Why is Portugal a hotspot for green hydrogen investment?

Portugal has received investment proposals for €16 billion worth of hydrogen production for industry. Considering that the global hydrogen market is only estimated at a current value of under €100 billion, this level of investment is staggering for a country that only represents an 0.27% share of global GDP. A combination of both geographical and political factors is fast placing Portugal as the dark horse to lead Europe’s early hydrogen economy.

In a statement on Sunday, the Portuguese Ministry of Environment and Climate Action released a statement claiming that “74 expressions of interest related to investment projects in the hydrogen industrial sector were received in the market consultation process ended on Friday.”

The total investment proposal covered “different strategic areas, starting with the production of green hydrogen for use in transport,” according to the Ministry, recognizing the possibility that Portugal can develop its own hydrogen transport network as a detailed blueprint for Europe’s hydrogen strategy.

This level has far surpassed the amount of investment that the country expected to see in its national strategy for hydrogen, which forecast a cumulative investment of €7 billion by 2030 – 85% from private firms – leading to a reduction in natural gas imports of up to €600 million.

As detailed in the country’s hydrogen strategy EN-H2, this investment will include between €400 and €450 million for the early development of a hydrogen plant at the retired Sines coal facility, which could cost up to €5 billion by the time it reaches full capacity of 1 GW in 2030. With this level of indicated investor confidence, the number of projects being proposed in Portugal will inevitably skyrocket over the next few years.

Portugal currently appears more optimistic over the potential of hydrogen than many of its European allies. Christian Pho Duc, MD of SmartEnergy has previously stated that Green hydrogen alone can close the gap by 50% in carbon emissions in the country, compared to the more modest EU-wide target of up to 14%, which was outlined in the new European hydrogen strategy two weeks ago.

The consensus in Portugal is also that its hydrogen economy will be solely Green, stepping over the stepping stone of blue hydrogen from CCUS – which the EU claims is necessary to bridge to gap through early demand.

Without any domestic capacity for natural gas production, and an exceptional natural resource for solar and wind the country will aim to produce all of its hydrogen needs from renewables; the country posted a record-low bid of €14.80 per MWh in a solar tender last year.

This natural resource, as well as the clarity that the country has given that this will be its tactic, are among the key drivers behind the mammoth investment interest.

One of the main areas of focus in Portugal’s strategy is that of gas grid injection and increasing the amount of green hydrogen blended in with natural gas. The existing Portuguese infrastructure will allow for approximately 5% of hydrogen, which the country aims to achieve on a nationwide scale as early as 2025 – which will require 24,200 tons of hydrogen per year, generated from 680 MW of solar capacity. Beyond this, the country will aim to rollout areas of 100% hydrogen, alongside a new generation of hydrogen-fueled appliances, with the gas reaching up to 15% in the mix by 2030, 50% by 2040 and 80% by 2050.

This comes alongside plans to increase the penetration of hydrogen in the transport sector to between 20% and 25% by 2040, with many of the new investment proposals aiming to grab their share of the market’s growth. For the proposed expansion, renewable generation allocated for electrolysis will have to reach 5 GW by 2040 – compared to the country’s total renewable capacity, which is currently just over 14 GW. 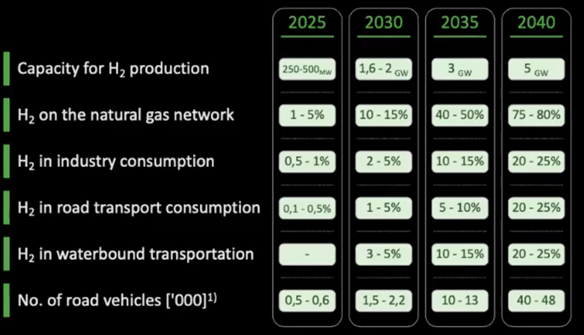 In fact, despite the investment preference, Portugal’s hydrogen strategy actually puts mobility towards the back-end of its priorities – behind gas injection, replacing existing feedstocks, head and power and industry – in that order.

The country currently has a pipeline of 1 GW worth of electrolyzer capacity in the pipeline, alongside 7 hydrogen-based projects, according to SmartEnergy, which is the commercial leader for two that are expected to come online in 2022. Both of these projects are focused on gas grid injection, with one for industry in Lisbon and another for mobility in Porto, with renewables projects that are half-dedicated to electricity production and half-dedicated to electrolysis.

With Portugal aiming to make green hydrogen a commodity as soon as possible, its first step beyond initial proof of concept, will be to create an offtake market for green hydrogen from large-scale projects.

In doing this, one of the key aims will be to slash the cost of green hydrogen, which is currently priced at between €3 and €6 per kg in the country and much more expensive than grey hydrogen at €1.50 per kg. A key step towards this will be to reduce project complexity and create a standardized approach to both production and infrastructure to reduce financial risk, before going hard at ramping up production. Once successful projects can be replicated and scaled, the country will inevitable turn to a tender-based approach for projects, developing in a similar way to those we’ve seen within wind and solar, possibly with the inclusion of schemes like Contracts for Difference to continue this early wave of investment.

Another key opportunity for Portugal, is to act as a gateway to North Africa, through similar projects to the 4 GW hydrogen plant being planned for mobility in NEOM, Saudi Arabia. North Africa could provide as much as half of Europe’s green hydrogen by 2040, and with its proximity to Morocco, Portugal and Spain are likely to become a key gateway for trading as the necessary infrastructure is developed.