The US could receive nearly half of its electricity from solar power by 2050, according to a new study from the country’s Department of Energy, as part of a drive to nearly fully decarbonize its power grid in just fourteen years.

The Solar Futures Study, released on Wednesday, comes as a key precursor to President Biden’s ambition to reach net zero emissions across the US electricity sector by 2035. At this point, according to the report, the US could have 40% of its power coming from solar resources, rising to 44% by the middle of the century.

“The study illuminates the fact that solar, our cheapest and fastest-growing source of clean energy, could produce enough electricity to power all of the homes in the US by 2035 and employ as many as 1.5 million people in the process,” said Secretary of Energy Jennifer Granholm when unveiling the report.

The roadmap to reaching the 40% target involves installing 30 GW of solar capacity per year between now and 2025 – up from an average of 10 GW over the past five years – before hitting annual additions of 60 GW between 2025 and 2030. As it stands, the US has just over 76 GW of solar capacity installed, and despite a record year of installations in 2020 still supplies just 3% of the nation’s power.

Decarbonizing the entire energy system could result in as much as 3,000 GW of solar being required by 2050 due to increased electrification in the transportation, buildings, and industrial sectors; electricity demand is set to rise by about 30% between 2020 and 2035, with an additional rise of 34% from 2035 to 2050. 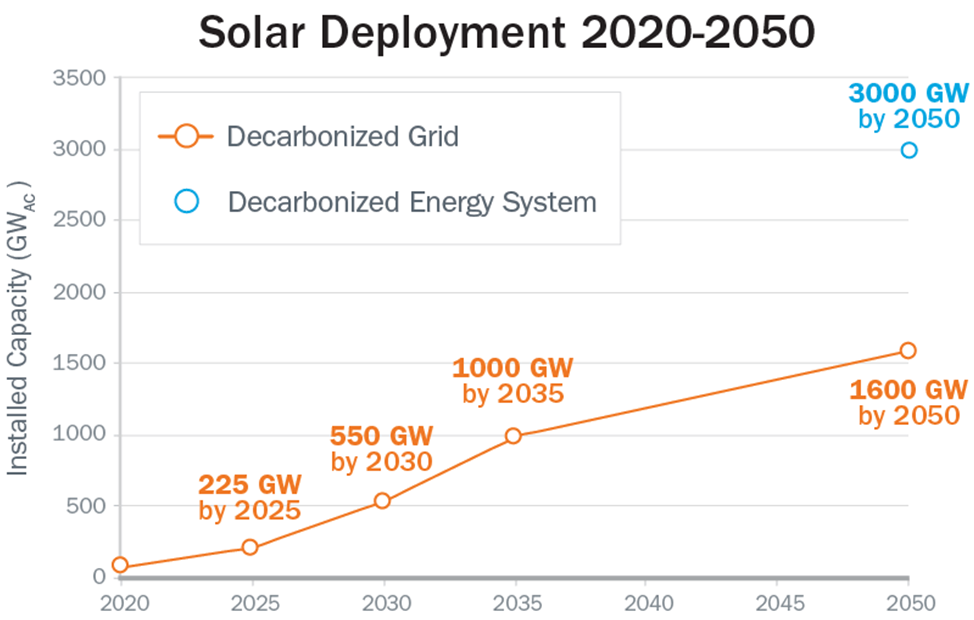 It also aims to expand the transmission capability of solar energy, through storage, microgrids and more accurate forecasting of solar output. The Interior Department also recently announced that it will aim to open up swathes of federal land across the US for wind and solar projects. The report does, however, note that land availability should not constrain solar deployment. In 2050, ground-based solar technologies require a maximum land area equivalent to 0.5% of the contiguous US surface area.

Four key things will be needed for the capacity to be reached: better technology, more storage, lower costs, and nearly one million workers in the industry – all things that are set to be achieved by current trends. The study calculated the net incremental cost of a fully decarbonized grid in 2050 as $210 billion, compared to net savings of $1.7 trillion through averted damage from climate change and air pollution over this timeframe.

In the immediate term, however, one key measure of support that the US solar industry is calling out for is an extension to the Investment Tax Credit (ITC), which allows a 30% credit to be claimed based on initial capital requirements. Over 700 companies have sent a letter to Congress seeking a long-term extension to this, which would “ease project financing challenges” and include standalone energy storage. A phase down, which was set to begin in 2020, has been proposed to be delayed until 2024, with the 30% level falling to 26% in 2025, 22% in 2026 and 10% thereafter. This would see the support increase for energy storage projects over 20 kWh as well as solar power.

Given the dominance of Chinese technology in the sector, it may also be important to review the Trump-imposed tariffs on Chinese construction materials, which continue to make solar deployment more expensive in the US.

The Solar Future’s study indicates that the remainder of a carbon-free grid in the US would likely consist of around 36% wind power (up from 8%), between 11% and 13% from nuclear (down from 19%), between 5% and 6% from hydropower (down from 7%) and 1% from sources like bioenergy and geothermal. While Biden is aiming for a fully decarbonized grid by 2035, the plan outlines a 95% reduction in absolute emissions, with the rest likely to be accounted for using carbon offsets.

Creating this decarbonized power sector will create between 500,000 and 1.5 million jobs across the countries solar sector by 2035, plus another 1.5 million in other technology areas.

After Biden’s inauguration last November, Rethink Energy provided a revised edition of its solar energy forecast, outlining how annual additions will rise by an average of 5 GW per year through to 2030, from 19 GW in 2020 to 66 GW in 2030, when cumulative capacity will surpass 450 GW. If the expansion continues at this rate, then approximately 860 GW of capacity will be installed by 2035, 14% short of the Department of Energy’s new target.