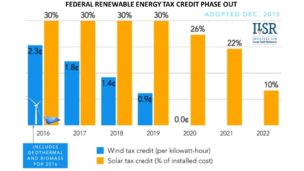 The wind industry has changed its strategy in the US and will now ask congress to allow all wind turbines, including onshore wind, to be included in the same tax credit scheme as solar. But lawmaker’s attention may be elsewhere, and onshore wind may have already had its day.

Onshore wind has enjoyed a consistent rise to 100 GW of capacity in the US since the wind production tax credit (PTC) came into play in 1992, with 39 GW more set to be installed by 2021. While it would seem obvious to push for an extension as rates phase down from 100% in 2016 to 40% this year, suppliers have seemed relaxed with the reality that the PTC is soon to be phased out completely, arguing that it is necessary to subsidize more immature technologies such as offshore wind and storage. Onshore should be able to stand on its own two feet, and that sentiment has been echoed by many observers, ex-Microsoft founder Bill Gates, for instance.

History tells us that the Solar Investment Tax Credit (ITC) received a much better deal in 2015 legal extensions, with a phasedown not starting until next year and remaining indefinitely at a 10% level.

While they work differently, the PTC and ITC have both facilitated rapid growth for their respective technologies. The PTC provides an annual tax deduction for each kWh electricity produced in the first 10 years of a project’s operation, with the ITC deducting a percentage of capital invested at the end of a projects first year.

The price of onshore wind in some instances has fallen to below $40/MWh but will rise above the cost of solar as the PTC phases out. Solar and wind, which both now readily compete with fossil fuels, have rarely competed for project funding in the past, but due to greater expense, demand for onshore wind could slump into the 2020s as developers look to solar for clean energy on land, especially if onshore wind does not continue to achieve government incentives.

It would mean that solar would be able to provide a better return on investment, forecasts are estimating that onshore wind will struggle to maintain its growth after the end of the PTC, where it will peak at 14.4% year-on-year growth. Acknowledging this, the American Wind Energy Association (AWEA) has called for it to be treated the same treatment as solar, by extending ITC to include wind. But will that happen?

Many believe that it is unlikely that AWEA’s wishes will be granted in congress. The decision is unlikely to dramatically impact the 2020 Presidential election campaign, and with a distracting impeachment enquiry underway, the stage does not appear to be set for a first-of-its-kind end of year deal in renewable tax credits. We could be left with the status quo in the runup to the next election, and then await new legislation if a new President comes to power. Wind could be in the wilderness for a year, perhaps permanently if Trump regains leadership.

So a late change of heart by the AWEA may have come too late. After the inevitable rush in capacity bids in the window that the PTC is still eligible, the added capacity year-on-year is predicted by Wood MacKenzie to fall to a suppressed 4GW (down from 13 GW in 2019). This is perhaps almost the reason for the surge in offshore wind, seen now as a separate area of investment on a different basis.

To us the AWEA has a choice – it can try to promote all wind under one instrument, and potentially fail, or it can put the big push behind offshore, the market where it is making most progress.

The aim is to get wind to share in the ITC instrument which drives solar so both can be supported by the same financial incentives. But it might be batter for the AWEA to simply accept that onshore wind has had its share of government incentives, and now has to work on a parity basis, and separately make a case for what the Republicans will see as a much smaller market of offshore.

Nimbyism (Not in my back yard) is a real problem in the US, and States such as Massachusetts, New Jersey and New York have already committed to offshore wind as a key part of their route to decarbonization. Projections show that the cost of offshore wind will be competitive with onshore wind within a decade. Given that some 40% of Americans live on the coast, and reduced transmission costs will be key to powering areas on the Atlantic Coast this should give it the edge in a fully mature wind market. It would therefore seem more logical for AWEA to cut its losses with onshore wind and throw everything it can into offshore.

Offshore wind already looks ready to boom, with 25GW of capacity already in the pipeline, but for that pipeline to suddenly not go flat, offshore needs one more tax incentive as the PTC deadline requires eligible projects to be online by the end of 2020.

The Offshore Wind Incentives for New Development Act was proposed in June 2019, but as yet no action has been taken to move this, or any technology-neutral tax credit proposals through the house. Following the current surge in renewables, the end of the PTC will see a dramatic slump in the growth of wind power. It is fairly vital for offshore wind to benefit from being “shoved in with solar” into the ITC before the next election or else the renaissance in offshore may be shortlived.