Biden-Harris administration turns the dial on US offshore wind

The US is gearing up to meet its 30GW 2030 target of offshore wind capacity that the Biden-Harris administration set out this year, with two new projects in the Atlantic Ocean, amounting to 4GW up next.

The Coastal Virginia Wind (CVOW) project (3GW) and the Sunrise Wind project (1GW) – off the coast of New York, Massachusetts and Rhode Island – if approved, could provide 4GW clean energy capacity that will power over 1.3 million homes.

Dominion Energy has already submitted a Construction and Operation Plan (COP) for its proposal to develop the CVOW project that includes up to 205 wind turbine generators and their associated offshore and onshore export cables. The CVOW project is located on the US outer continental shelf approximately 24 nautical miles east of Virginia Beach, Virginia.

Sunrise Wind submitted a COP for its proposal to develop a wind energy facility that includes up to 94 turbines and their associated export cables. The wind farm and offshore substation would be approximately 16.4 nautical miles (nm) south of Martha’s Vineyard, Massachusetts, approximately 26.5 nm east of Montauk, New York, and 14.5 nm from Block Island, Rhode Island. The onshore export cables, substation, and grid connection would be located in Holbrook, New York.

Following the first ever Pacific Ocean offshore wind auction that took place on December the 6th, five areas have been leased to five different companies whose high bids totaled $757.1 million, including Equinor, RWE, California North Floating, Central California Offshore Wind and Invenergy California Offshore. The five areas located on the Outer Continental Shelf off central and northern California have a potential to deliver a total of 4.6GW of offshore wind capacity, sufficient to power 1.5 million homes a year.

This has been the third US wind auction of the year, with the first two being located on the East Coast. The depth of the water on the Atlantic coast is slightly more favorable than the one off the West Coast since shallow water extends further away from the East Coast, allowing for more areas to be converted to wind farms. A similar advantage is also seen in Europe’s North Sea which is set to house multiple wind farms that will see countries like the UK, Denmark and Germany, among others, benefit through the use of energy islands and interconnectors. 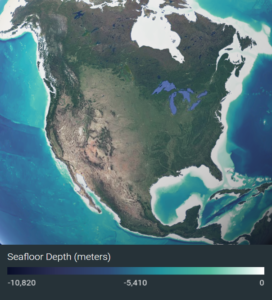 Due to lease stipulations included in the auctions overseen by the Bureau of Ocean Energy Management (BOEM), these will commit substantial investment that will also support the economic growth of the floating wind industry in the US. As part of the Biden-Harris administration offshore wind target, the US must reach 15 GW of dedicated floating wind capacity by 2035.

The lease sale included a 20-percent credit for bidders who committed to a monetary contribution to programs or initiatives that support workforce training programs for the floating offshore wind industry, the development of a US domestic supply chain for the floating offshore wind energy industry, or both. This credit will result in over $117 million in investments for these critical programs.

The Department of the Interior has already approved what will be the first two US commercial scale offshore wind projects, initiated review on ten additional projects, and held three offshore wind lease auctions.

The US currently has multiple offshore projects in various stages of planning or building, amounting to about 17GW, all scheduled to begin operating between 2023 and 2028. In spite of the recent roadblocks encountered by some of these projects regarding their Power Purchasing Agreements not being economically viable – Rethink covered these issues in two separate articles here and here – we believe that there is enough effort put in by the industry and that supply chain issues and underdeveloped infrastructure will only slow down the wind industry momentarily and the 2030 US and European targets are not in jeopardy. A more detailed overview of the immediate future of the wind industry can be accessed via a research paper titled “Wind industry blown off course by recession – promises a full recovery. ”