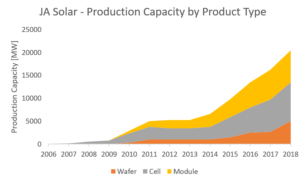 This series of articles aims to identify and examine leading players in the market and provide key, impartial insight into how their positions are likely to develop as demand for solar panels increases. Following our first profile on market leaders Jinko Solar, our second focus turns to key competitor JA Solar.

In almost all respects, the operations of the major players in solar manufacturing have converged to adopt a similar game plan to stay ahead in the global market. All have started to focus more on a vertically integrated structure, with a level of self-sufficiency from wafer, through PV cell, to a complete solar module. As we pointed out a few weeks ago, the top four solar manufacturers are based in China, with the key advantage of a low-cost supply chain through access to materials and relatively cheap labor compared to competitors like Canadian Solar or First Solar.

JA Solar was founded in 2005, starting its manufacture of photovoltaic cells in April the following year. This initially entailed just 75 MW of cell production, with wafers imported from elsewhere and sales made directly to module manufacturers.

Acknowledging competitors with more broad operations, and a rising demand in the marketplace, expansions both up and downstream started in 2010, with production facilities opening for wafer and module production.

Unlike rivals Jinko, JA has maintained its initial focus, with cells remaining its primary source of production capacity, although revenue for modules is now three times larger. In 2017, $2,821 million of revenue was generated from the company’s 7000 MW production capacity in solar modules, compared to the $905 million made from the 8500 MW in cells.

JA’s headquarters are situated in Beijing, China, with manufacturing facilities in several of the country’s regions as well as in Malaysia. Most recently the company has set up shop in Vietnam, investing $1 billion towards a cell fabrication unit as well $280 million for a 1.5 GW wafer production plant. The company’s total employee count currently sits at around 20,000.

The company’s vertically integrated infrastructure has supported the development of 35 GW worth of projects within over 120 countries including China, US, Japan, UK, Chile, India, among others. The company’s most recently published annual report, from 2017, showed that 48% of revenue came from domestic business, 8% from Japan, with the rest distributed worldwide, which is relatively consistent with figures from previous years.

Due to high demand, product shipments at JA have largely followed the company’s expansion in production capacity, which is now 5 GW for wafers, 8.5 GW for cells and 7 GW for modules.

With 8.8 GW of module shipments reported in 2018, we estimate JA’s market share to currently sit at around 8.69% and expect this to rise marginally into the start of the 2020s where it will sit closer to the 9% mark. This is dependent on a growth of module production capacity to around 16 GW by the end of 2020, but the company is keeping its cards close to its chest regarding its scaling intentions.

Through becoming vertically integrated, modules have accounted for more and more of JA’s revenue – now responsible for around 94%. With more cells made in-house and used for JA’s own modules, annual revenue from cells has dropped accordingly, from $2,414 million in 2013, to $905 million before the company went private in 2018.

A further string to JA’s bow is its project development business, which has been operational since 2013, connecting solar projects to grids to generate revenue either through the sale of project assets or through electricity sales. Current projects include those in China, Zimbabwe and South Africa.

Naturally within a manufacturer of this scale, the company’s products are technically competitive. Cell technology now sits at 21.3% for monocrystalline and 18.6% for polycrystalline, similar to Jinko Solar’s figures of 21.7% and 18.8% respectively. The company has seemingly been slower in the progression to monocrystalline than some competitors, with some blame attributed to the fact that vertical integration was achieved later. In 2015, 98% of sales involved polycrystalline cells, which fell by over 25% into 2017.

JA appears to have stayed firmly in its remit of conventional technology, with no reported research in areas of thin film, ribbon sheet or nano technology. Recently it has licensed intellectual property rights from Japanese company Shin-Etsu Chemical for the use of gallium-doped silicon wafers.

Gallium, including Gallium Arsenide, has historically proved expensive, and Arsenic very hard to work with, despite the ability to increase the range of acceptable wavelengths of light absorbed by a solar panel, and improve its efficiency. JA will hope that with these IP rights, Gallium doping will provide an effective method to prevent light induced degradation in its PERC cells.

JA’s commercial technology is split into four categories which are now starting to show the modern-day bias towards monocrystalline silicon. Operational efficiencies in the products vary between 17.40% and 20.40%, with each model available in 60-cell or 72-cell form. The company claims that bifacial technology in several of its models can boost yield by around 16%.

The company also offers half-cell modules – with double the number of cells on a single panel – to improve daily operation by reducing the risk of shading or hotspots. The option of framed panels is also available to improve the mechanical properties and practicality of JA’s modules, as well as the interface with tracking or floating technology.

A key technology that JA is keen to promote is Passivated Emitter and Rear Cell (PERC) modules, which use a slightly different cell architecture to traditional PV technologies. PERC cells use a screen-printed silver paste to form contacts, decreasing the amount of reflection from the panel while increasing module power and efficiency by an absolute value of up to 1%. Currently this technology is fairly expensive, due to the increased number of manufacturing steps, although as it scales, this could well become more widely adopted. Between 2015 and 2017, the average selling price per watt of JA’s solar modules fell from $0.50 to $0.37.

JA withdrew from the Nasdaq stock exchange in June 2018, completing its privatization as it became a wholly owned subsidiary of Holdco. This came as part of a wave of solar manufacturers, including Rene and Trina solar, who also went private around this period.

The rationale behind this was due to several factors. The Chinese government had just issued guidelines to boost private investment in manufacturing, including financial support schemes, which particularly encouraged projects that comprised solar energy. The necessity to publish timely filings and financial reports for the companies’ diversified operations may have also contributed, but the uncertainty within the global market likely made retreating to private and domestic investment more attractive.

The US is one of the largest potential solar markets, with a current pipeline of nearly 40 GW worth of PV projects. But with debate around the timing of the investment tax credit’s (ITC) phase down, as well as volatilities around President Trump’s imposed 30% trade tariffs, the perception of the solar marketplace to investors is uncertain. Cutting ties with US investors would allow the companies to follow their unwritten obligations to their own country and guarantee more sustainable profit through domestic projects and supply chain.

The low sale valuation of $362.1 million, despite revenues of $2.6 billion in 2017, is probably a further consequence of this. Trump’s tariffs were imposed in early 2018 and getting off the market before running into a potential stumbling block was most likely a priority.

The Chinese market stumbled itself a bit this year, with installations in 2019 likely to only reach between 25 and 30 GW, down from 44 GW last year and a record 53 GW the year before. This is primarily due to the Chinese government cutting subsidies and making domestic projects less of a profitable business for the likes of JA Solar. However, with this likely to bounce back hard into the 2020s, manufacturers will be keen to ramp up their production capacity and improve their economies of scale.

JA recently decided to relist on the Chinese stock market, after completing a buyout of engineering firm, Qinhuangdao Tianye Tonglian Heavy Industry Co. With JA and Trina solar both somewhat returning to the public domain, confidence in the market is clearly on the up within investment circles.

The image that JA Solar seems keen to promote is unlike Jinko Solar in that they aren’t outrageously focused on PV innovation. The company’s business model seems slightly more rounded, with a more even split between wafer, cell and module production, while slightly dipping its toe into downstream development. Making use of its China-based supply chain, JA Solar will continue to focus on LCOE reduction through economies of scale. In the next few years, we predict that this will focus on the explosion of solar within China and neighboring countries like Japan. While the company’s development arm is likely to remain a small contributor to revenue, lessons learned are likely to be influential in adapting products to become more compatible in emerging markets like floating solar.

JA will probably try to grow into a one-stop-shop for solar development, but with demand increasing for solar-plus-storage, it will be hard to compete with established developers. As demand grows, and smaller manufacturers feel the squeeze of subsidy cuts, it wouldn’t be surprising to see JA spin-off its development in a similar style to SunPower and focus solely on making revenue from manufacture.

With the advantage that JA can be self sufficient in meeting wafer and cell demand for its modules, LCOE reduction will be focused on scaling production in all areas – especially if it wants to make domestic operations more profitable.

Unless significant developments are made within Gallium technology, JA will be best placed to stay-ahead of innovation by making sure it remains among the most cost-competitive manufacturers in the market, focusing on conventional technologies. While rivals such as Jinko solar are more likely to focus on innovations within material science, JA seems more likely to turn its attention to low-cost manufacturing processes.