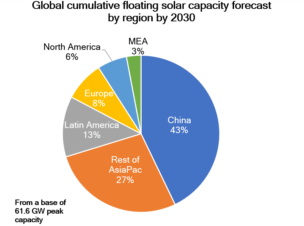 Floating Solar will take off over the next ten years, growing from an average of 300 MW today each year, to a massive 9.4 GW of capacity added during 2030. Cumulatively it will become a market above 60 GW, on the back of an alliance with existing hydro electric plants, with the solar floating on dam reservoirs.

Those partnerships with dams will make up the bulk of the floating solar by 2030, but other types of floating solar, including in the sea, in estuaries, in harbors, as well as on land based lakes, drinking water reservoirs and waste water, will still all be healthy growing markets.

This is according to the latest report from Rethink Energy, the renewables energy service from Rethink Technology Research entitled “Floating Solar goes stratospheric once it partners with hydro – Global Forecast to 2030.”

The reason for the partnership with hydro was pointed out earlier this year in a paper from the World Bank, which will be called upon to fund many of these improvements in emerging markets.

Both China and India will be among the largest markets, and both already have live examples of solar and hydro working in tandem to produce higher baseloads than the dam can on its own.

The study predicts that 70% of “major” dams built since 1970 will be good enough to pair hydroelectricity with floating solar and that the bulk of these will be complete by 2040, with around 50% completed by 2030.

Other drivers to what are essentially three separate markets include the need for shore power in major harbors, and the slowly spreading workforce that understands how to make floating solar profitable. Currently we estimate that only 2,000 people have experience working on a floating solar platform, and this will rise between 10% and 20% per annum, depending on location and financial resources.

One of the largest projects already planned is the 2.1 GW Saemangeum Seawall dyke, which will house 2.1 GW of floating solar when complete with some capacity coming online in 2022 and completion set for 2025. Completion of this project will set a precedent for estuaries and harbors on tidal water, and could trigger a wave of significant global projects in sea water which has less than one meter waves.

For a comprehensive view on the development of the floating wind industry, the “Floating Solar goes stratospheric once it partners with hydro” report is available through the link below as part of the Rethink Energy subscription.

SunPower goes the way of all US solar firms – dumps manufacture
Wave power too expensive to stand alone, looks to pair with wind