The US has a new President, and after being sworn in yesterday, Biden’s new administration has immediately focused its attention on revoking Trump-era policies, several of which have been overturned on Day One of his tenure.

For those wary of climate change, this will be marked by the US rejoining the Paris Agreement and halting the development of the controversial Keystone XL pipeline. However, much of the groundwork for the country’s transformation is already underway, with the EIA highlighting that renewables installations will significantly outweigh fossil fuels through 2021.

According to the EIA’s latest inventory of electrical generators, at least 39.7 GW of power generating look set to come online, 84% of which will come from zero-carbon sources. This looks set to build on record US renewables installations in 2020, which saw around 35 GW added across the country.

Through the year, utility-scale solar power will account for 15.4 GW of new grid capacity, setting a new record, and surpassing additions in 2020, which amounted to just under 12 GW. Rethink anticipates that approximately 1.4 GW of this could face delays into 2022 due to Covid-19, while an additional 4.1 GW of small-scale solar PV capacity will be installed, primarily on rooftops, throughout 2021.

More than half of the utility-scale capacity is planned across Southern states, with exceptional solar resource. Texas will account for 28% of installations, followed by Nevada (9%), California (9%) and North Carolina (7%).

Following a record year in 2020, with 21 GW of capacity coming online ahead of the scheduled phase out of the Production Tax Credit (PTC), the EIA has a more conservative outlook for wind power, expecting a dip to just 12.2 GW of new capacity in 2021. It also expects Texas and Oklahoma to account for more than half of the 2021 wind capacity additions, with the largest addition being the 999 MW Travese wind farm in Oklahoma.

However, under new legislation, onshore wind will benefit from a one-year extension to the PTC, which will now remain at 60% through to the end of 2021, rather than falling to 40% as previously planned. Like in 2020, which saw a rush of 14.9 GW of wind capacity installed in December alone, the EIA expects a surge of more than 7 GW to be installed in the final month of 2021. Rethink Energy, however, believes that the rush will be more intense than this, and expects total wind power additions in 2021 to surpass the 19 GW mark. Installations through the year will also include the country’s first offshore wind farm since 2016, with the addition of the 12 MW Coastal Virginia Offshore Wind pilot project.

Around 3% of the new US generating capacity in 2021 will come from the Vogtle nuclear power plant in Georgia, which will come online in November.

With coal-fired development eliminated entirely, natural gas will represent the only fossil-fuel additions through 2021, with 6.6 GW to be added incrementally through the year. These new gas-fired generators are scheduled to be online for at least thirty years, which will go against Joe Biden’s desire to have a carbon neutral electricity system in the country by 2035. Considering the plummeting costs of wind and solar power through the coming years, Rethink Energy also anticipates that this capacity will result in over $3 billion of power generation losses compared to a scenario where the same amount of capacity was brought online from renewables-plus-storage projects.

It’s likely that these projects will end up being retired early or idled for significant periods of time. Recent reports have shown that Colorado’s newest coal plant (installed in 2010) was idled for repair through pretty much the whole of 2020, without disrupting the state’s power system.

The rate at which this is being realized will accelerate dramatically through the 2020s. The EIA expects the capacity of utility-scale battery storage to more than quadruple, with 4.3 GW coming online in 2021, including a 409 MW battery at the Manatee Solar Energy Center in Florida. Rethink suggests that there may be a significant upside to this, with a potential for the US to see 6.9 GW installed of new battery capacity installed through the year. 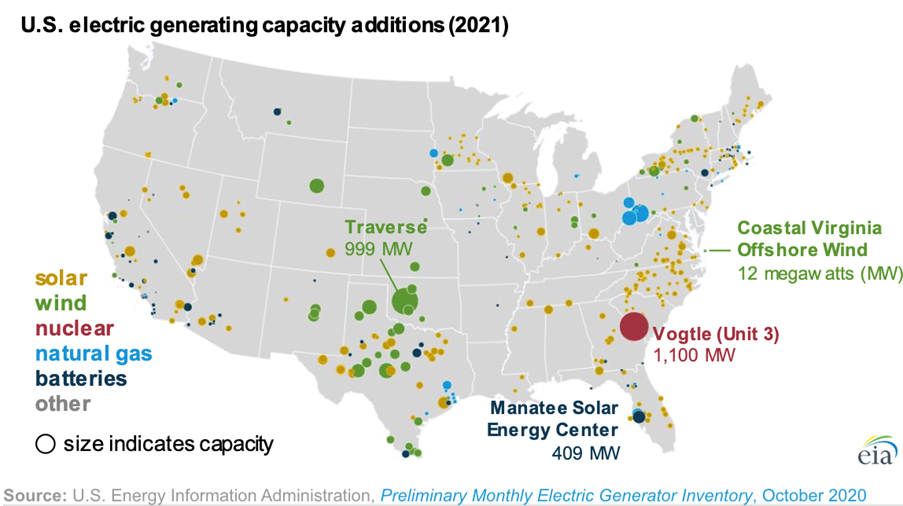 What is clear from this, is the change of US perspective, even prior to Biden’s election victory. However, the confidence provided by his tenure will drive installations beyond those expected by the EIA and will accelerate the encompassing transition to clean energy.

Despite being at the helm for just a matter of hours, several moves have already been made to push Biden’s climate plan into action: A memo has been issued to start the 30-day process for the US to rejoin the Paris agreement, while a separate order has scrapped the permit for the Keystone XL oil sands pipeline.

The Keystone pipeline aims to connect Canadian tar-sands producers to American oil refineries and had previously been blocked by the Obama administration in 2015. However, with Trump overturning this decision in 2017 and with $8 billion of funding secured, the prospect of 830,000 barrels of heavy crude oil surging south every day appeared inevitable. While protestors were forced to remain at home through Covid-19, developer TC Energy had rushed into position to prepare for construction on parts that were not facing delays due to water crossings. While much of the project has already been built, Biden appears content with taking the wasted costs on the chin in the name of climate action. TC Energy will appeal the revoking of its permit, with a promise to be carbon neutral through development, but this is unlikely to be heeded.

More orders will come on February 1st, including a ban on oil and gas development in the Artic National Wildlife Range, but it’s worth noting that it will be a hard-fought battle to put the country on track with Biden’s vision of zero carbon electricity by 2035 and net zero emissions by 2050. However, with the Democrats taking hold of both the House and the Senate, infrastructure funding for clean energy will soon be flooding the markets.