The demand for the world’s most used metal will not fall “en route” to net zero emissions. According to an upcoming report from Rethink Energy, steel use will grow by more than 60% through to 2050, driven by economic development in Asia and Africa. But even as it grows, the steel industry will undergo the largest transformation since its formation, as it replaces its existing coal-heavy methods of production, and heads towards net zero emissions itself. 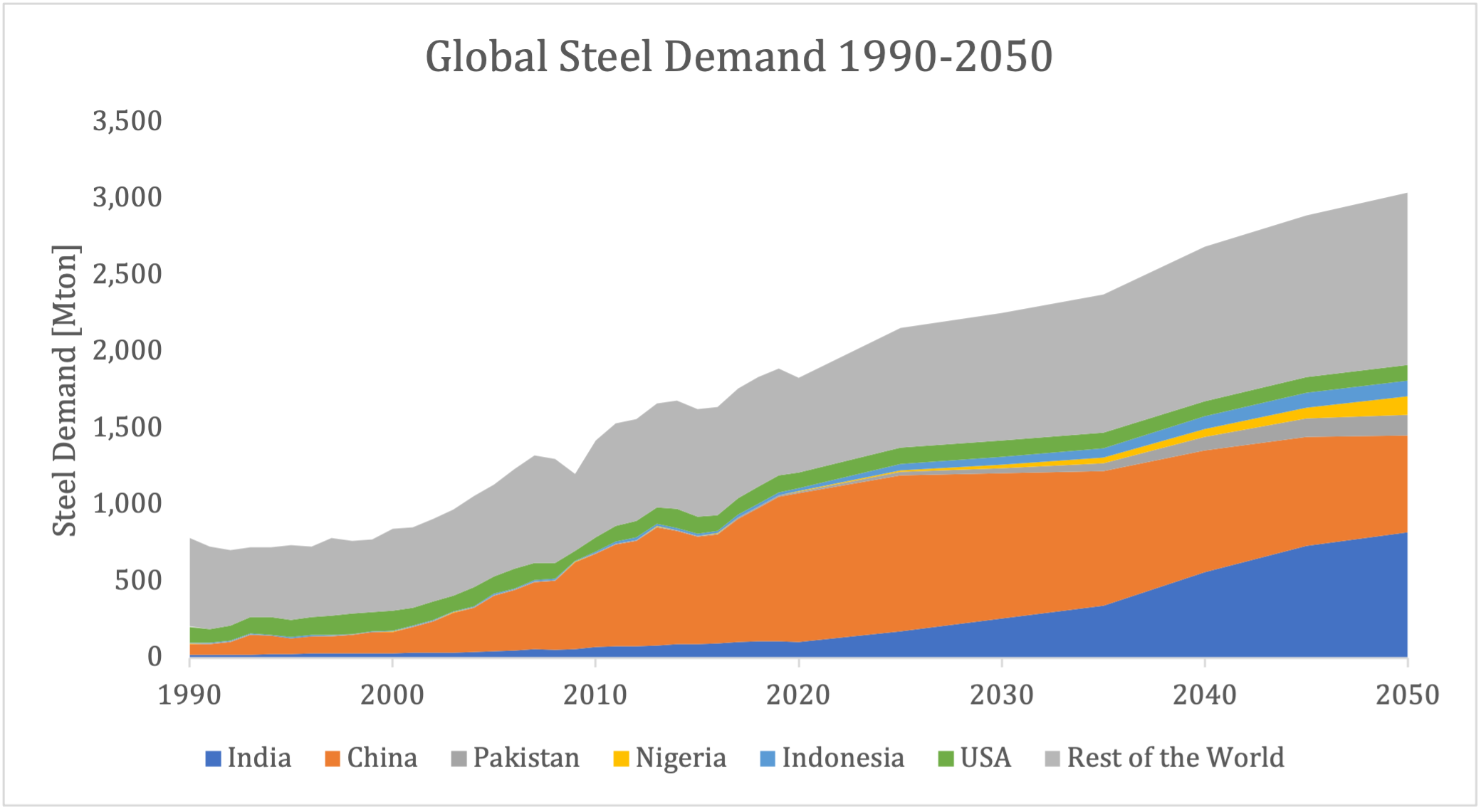 It might seem unintuitive to directly address steelmaking in an energy publication, but in terms of global decarbonization, the need to integrate all heavy emitting industries into energy-based thinking is essential. The global steel industry accounts for up to 9% of worldwide emissions and nearly 20% of its coal consumption.

In a society with an encompassing, albeit blurry, objective of sustainability, one primary aim is to decouple carbon emissions from economic growth. However, steel is used in troves of applications, which are entrenched in the idea of societal development; it’s use in stronger buildings, hospitals, transport, construction machinery and consumer goods are just a few.

In developed countries with stable population growth, including those in Europe and North America, steel demand is already starting to plateau or fall steadily; as demand shifts from construction to maintenance, demand per capita converges in the region of 150 kilograms to 250 kilograms per person per year. The overall stock of steel in a country will also typically stabilize at around 10 tons per person.

However, during early development and in manufacturing-intense nations in particular, the need to build out infrastructure can see annual demand per person surpass 1 ton. China, South Korea and Japan, for instance, all had a demand of over 500 kilograms per capita in 2020, despite dented output through Covid-19.

These will soon be joined by other developing nations, taking up a greater portion of the world’s population. Bangladesh, DR Congo, India, Indonesia, Nigeria, Pakistan, Philippines, Tanzania, and Vietnam – countries that will account for 36% of the world’s population by 2050 – are all yet to see peak steel demand per capita and will drive an increase in global steel use from 1.83 gigatons per year in 2020 to more than 3 gigatons in 2050.

Throughout this period, the global population will grow by 25% to 9.7 billion and GDP will increase by 150%. The global average for steel demand per capita will rise from 235 kilograms to 312 kilograms per year.

Left unchecked and unaccounted for, this growth would see a concurrent increase in energy demand and carbon emissions. Through transforming the use of energy in this sector to rely on low-carbon sources, the absolute values behind these figures will have to fall to near zero for countries – including China, India and the US – to hit their emission reduction targets and to limit climate change to non-catastrophic levels.

One obvious measure to mitigate emissions is to increase the share of scrap steel being used in the place of primary steel, which relies on the extraction and processing of iron ore and currently accounts for more than 65% of crude steel production.

The lion’s share of the primary production – more than 70% of it – is undertaken in a process using blast furnaces (BF) and basic oxygen furnaces (BOF), both of which use coke, a derivative of coal, at temperatures of over 1,200 degrees Celsius. For each ton of crude steel produced through this method, as much as 2.3 tons of CO2 is emitted, while 6.1 MWh of energy is consumed.

Steel benefits from the characteristic that it is 100% recyclable, meaning that in some regions, more than 90% of scrap steel is recovered and then used to replace iron ore in production.

Not only does scrap steel eliminate the need to undertake emission-intensive mining practices for iron ore, but when processed through an electric arc furnace (EAF), as opposed to the BF/BOF route, both emissions and energy consumption fall by around 75%. Emissions will also fall further as the electricity used to power an EAF continues to shift towards renewables.

But while the concept of a circular economy continues to gather momentum, why is scrap steel still dwarfed by iron ore as a feedstock material? In the US, for example, the scrap share of metallic inputs into steel production was 72% in 2019.

The truth lies in the age of our current steel stock – by which we mean the buildings currently erected, and cars currently being driven on our streets. Steel in the average building has a lifecycle of 43 years, vehicles typically last around 19 years, while machinery and consumer goods have lifetimes of 22 years and 10 years respectively.

So, in countries like China, which saw a 4.4-fold increase in steel use between 2000 and 2010, the installed steel stock is much younger than in countries that experienced earlier economic growth. Scrap steel, as a result, only accounts for 25% of the country’s metallic inputs for crude production. In India, which is in an earlier stage of economic growth, the figure is below 20%.

At the current rate of global development, even if all global scrap were captured and recycled and processed (1.3 tons of scrap is typically needed for 1.0 ton of crude steel), it could only account for 36% of metallic inputs. In 2019, World Steel reported that 865 megatons of scrap were available, compared to a global demand of 1,889 megatons.

While in China the available scrap steel will now start to increase as more consumer goods, vehicles, and eventually buildings – which account for 50% of demand – enter retirement, the same issues will soon be faced by countries in earlier stages of economic growth and the steel demand cycle.

Because of this, while secondary steel production, using scrap as a feedstock, will increase by 134% between 2020 and 2050, it is unlikely that primary production will peak until the early 2040s. Rethink Energy currently predicts that it will rise by 43% over the next three decades.

However, with global steel giants like ArcelorMittal, Nippon Steel, Posco, and China’s Buowu Steel Group pledging themselves to net zero emissions of their own accord, this primary production, itself will also face dramatic transformation.

Two schools of thought have emerged to start producing emission-free steel: one focusing on carbon capture; and the other focusing on using natural gas and then hydrogen for the direct reduction of iron – before hot briquetted iron is fed into an EAF. However, with carbon capture technologies currently failing to realize their stated potential, hydrogen-powered DRI is increasingly becoming the favorite for the future production of green steel, with commercialization expected in the late 2020s.

In the coming weeks, Rethink Energy will release its Future of Steel report to address the penetration of these decarbonizing technologies in key markets, and the implications the transition will have on stakeholders throughout the steel and energy sectors. Please contact [email protected] for more information.