Green hydrogen will become the cheapest form of hydrogen production by 2026, even without the inevitable (and huge) technological disruption, according to Rethink Energy. Falling electricity costs, economies of scale, and increasingly aggressive carbon taxation will eliminate the need for ‘blue’ hydrogen as an interim solution, while driving the emergence of hydrogen markets in the likes of China by the middle of the decade.

Rethink Energy will publish its first forecast for hydrogen production in early October, although early projections indicate that economics alone will drive an explosive demand for electrolysis to tackle ‘hard to decarbonize’ industries like transport, steelmaking, and home heating. 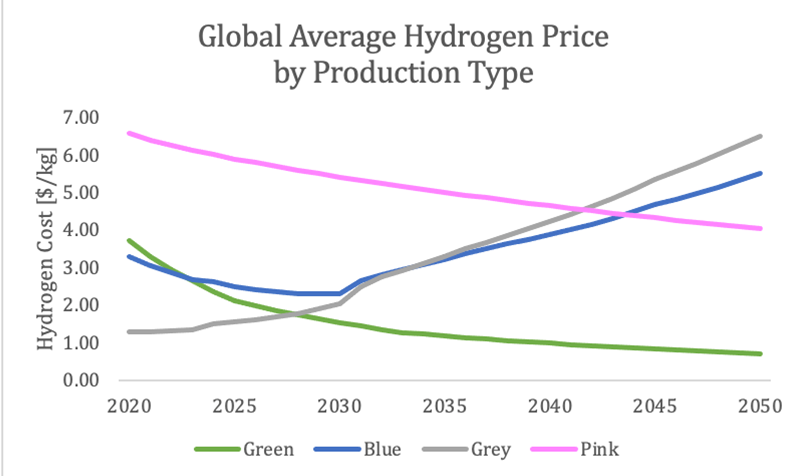 The ‘tipping point’ that many are failing to correctly forecast is the timeframe in which the bulk of the market will see green hydrogen – produced using electrolysis driven by renewable power – fall below the cost of ‘grey’ hydrogen – produced through the steam methane reforming of natural gas.

Grey hydrogen currently accounts for nearly all the 80 million tons of global demand, while electrolysis capacity sits below 200 MW, accounting for less than 1% of total annual production.

With steam methane reforming being a fairly established process, there is little scope for significant reduction in the capital or operational costs of grey hydrogen production units, which account for just one third of the overall price of grey hydrogen (c.$0.41 per kilogram.)

The cost of grey hydrogen usually varies between $1.00 and $2.00 per kilogram due to the price of natural gas in a specific region. Each ton of hydrogen produced requires 2.7 tons of methane input. The cost ascribed to the 10 kilograms of CO2 emitted for every ton of hydrogen produced, along with the fugitive upstream emissions, also applies the bulk of the upward pressure.

In Europe, with medium gas prices and carbon pricing already at $65 per ton, grey hydrogen prices are already being pushed up to around $2.4 per kilogram. China, with extremely high gas prices, will see grey hydrogen rise from $1.7 to $5.1 per kilogram by 2040 as it gradually starts to increase the scope of its nascent carbon market.

Many are trying to solve this problem by capturing and storing the CO2 output from grey hydrogen production, with devices installed for both the tail gases and flue gases. However, not only does this come with at least 20% additional cost in the long-term, but capture rates are also unlikely to exceed 85%, before you consider the vast upstream ‘fugitive’ methane emissions.

Current flagship CCS projects achieve far lower capture rates than this; the Petra Nova project in the US captures less than 40% of the flue gas from one of four coal-fired units, while the Boundary Dam project in Canada has an overall capture rate of 31%. Even at 85%, a recent study indicated that total emissions will only fall by between 9% and 12% compared to grey hydrogen. Accounting for these emissions, the lowest price that we’re likely to see for blue hydrogen will be $2.3 per kilogram in 2027, before it starts to rise with global carbon prices and accountability over fugitive emissions.

Meanwhile, the cost of green hydrogen is only heading in one direction – downwards. With a conservative learning rate of around 14%, the capital cost of electrolyzer units will fall from around $1,400 per kW to $340 per kW by 2030, as global capacity rises to nearly 100 GW. Incremental improvements in efficiency and capacity factor will also see a reduced demand for electricity, which itself will be falling in price. With similar economies of scale, the cost of solar power in particular will fall below $20 per MWh by the end of the decade, accounting for 37% of the overall cost reduction of green hydrogen. By 2030, the global average cost of green hydrogen will have fallen to $1.50 per kilogram.

Green hydrogen will be cheaper than grey or blue hydrogen almost everywhere by 2028. In places like China, where both gas prices and solar potential are high, these economic factors alone will see cost parity in early 2026. 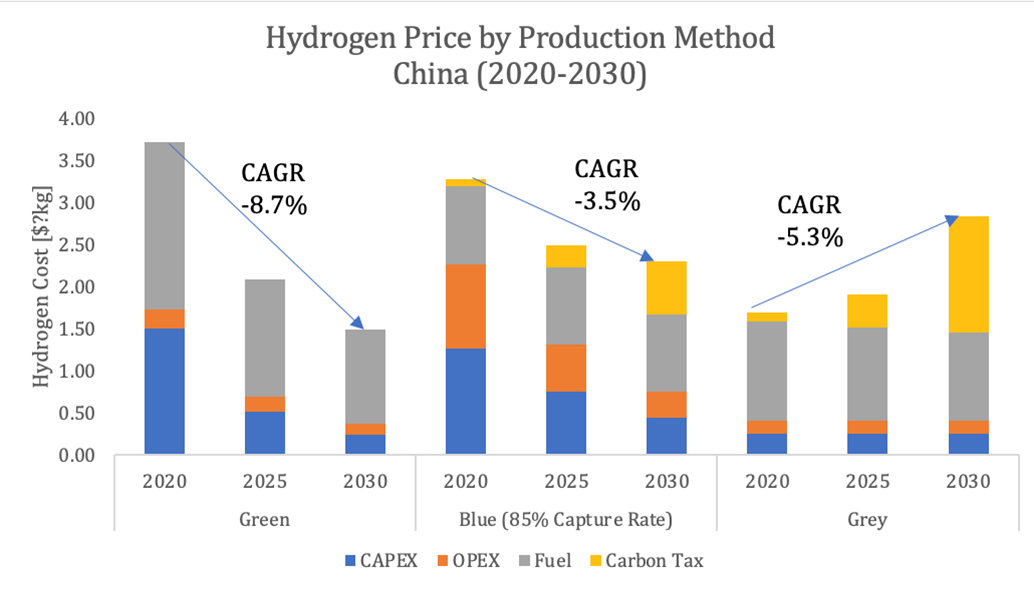 Change, however, is seldom linear like this. We’ve seen a huge number of universities and technology companies that claim to have invented a way to revolutionize the process of electrolysis (including new catalysts or heat-based approaches). Others claim to have eliminated the need for electrolysis entirely or that tapping waste resources or depleted oil reservoirs is the way to go for carbon neutral hydrogen. Whichever way things go, we would expect another two or three years to be shaved off this tipping point at least, with the first ‘cost competitive’ green hydrogen – albeit at small scale – to be produced in 2023.