Iberdrola has partnered with fertilizer company Fertiberia to build Europe’s largest green hydrogen plant to date. With focus on the ammonia production industry, this is one of the first concrete steps to decarbonize the exiting feedstock of hydrogen used in Europe.

With a combined investment of €150 million, Iberdrola will construct a 100 MW solar plant, with a 20 MWh lithium ion battery system, to power a 20 MW electrolyzer for the production of 100% green hydrogen. Based in Puertollano, Spain, this plant will be used in the production of ammonia at Fertiberia’s fertilizer plant, hoping to save 39,000 tons of CO2 each year once it starts operation in 2021, while generating 700 jobs in the region.

In the press release announcing the project, Fertiberia has claimed that the Puertollano plant is already one of the most efficiency in the EU, producing more than 200,000 tons of ammonia per year. With the new injection of green hydrogen, the company will be able to reduce natural gas requirements by 10%.

While this appears small, the pair has claimed that the project will allow Fertiberia to become the first European company to develop expertise in large-scale green ammonia generation. 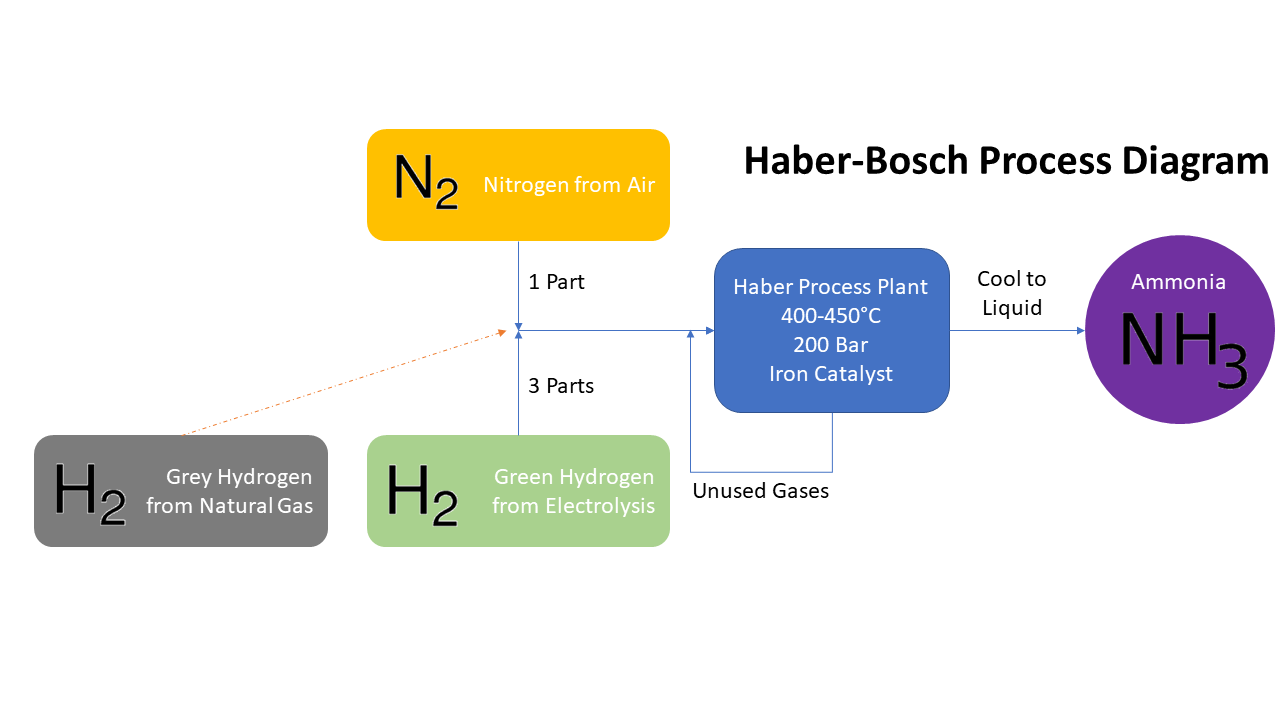 Ammonia production currently accounts for 43% of global hydrogen demand, with refining taking up nearly all of the rest. It’s often forgotten that industrial scale hydrogen has been around for years, and that it’s specifically green hydrogen which is drawing all the attention at the moment.

Global demand for pure hydrogen is currently around 80 Megatons per year, but nearly all of this comes from the ‘grey hydrogen’ sector – hydrogen produced through steam methane reforming of natural gas – and not ‘green hydrogen’ from renewables. This is responsible for approximately 830 Megatons of CO2 per year and around 2% of global emissions.

With this existing market for hydrogen, the exiting feedstock is one of the energy sector’s frontrunners for the early penetration of green hydrogen. While it may be less profitable than sectors like mobility and gas-grid injection, the fact that the demand is already there means that investors can be confident that green hydrogen will penetrate the market, if adequately subsidized to bring prices of between €3 and €6 per kilogram, down to parity with grey hydrogen, which costs around €1.50 per kilogram in today’s market.

This support is also looking more and more likely to materialize. As part of the EU’s recently announced hydrogen strategy, decarbonizing existing hydrogen production was identified as a key priority. In the first phase of its roadmap, it intends large scale electrolyzers (up to 100 MW) to be “installed next to existing demand centers in larger refineries, steel plants and chemical complexes.” The Fertiberia project does just that.

It’s likely that financial incentives will be more attractive for new projects, rather than retrofitting the existing feedstock. Rethink Energy has forecast that existing feedstocks will run on 15% green hydrogen by 2030, rising to 65% by 2040. 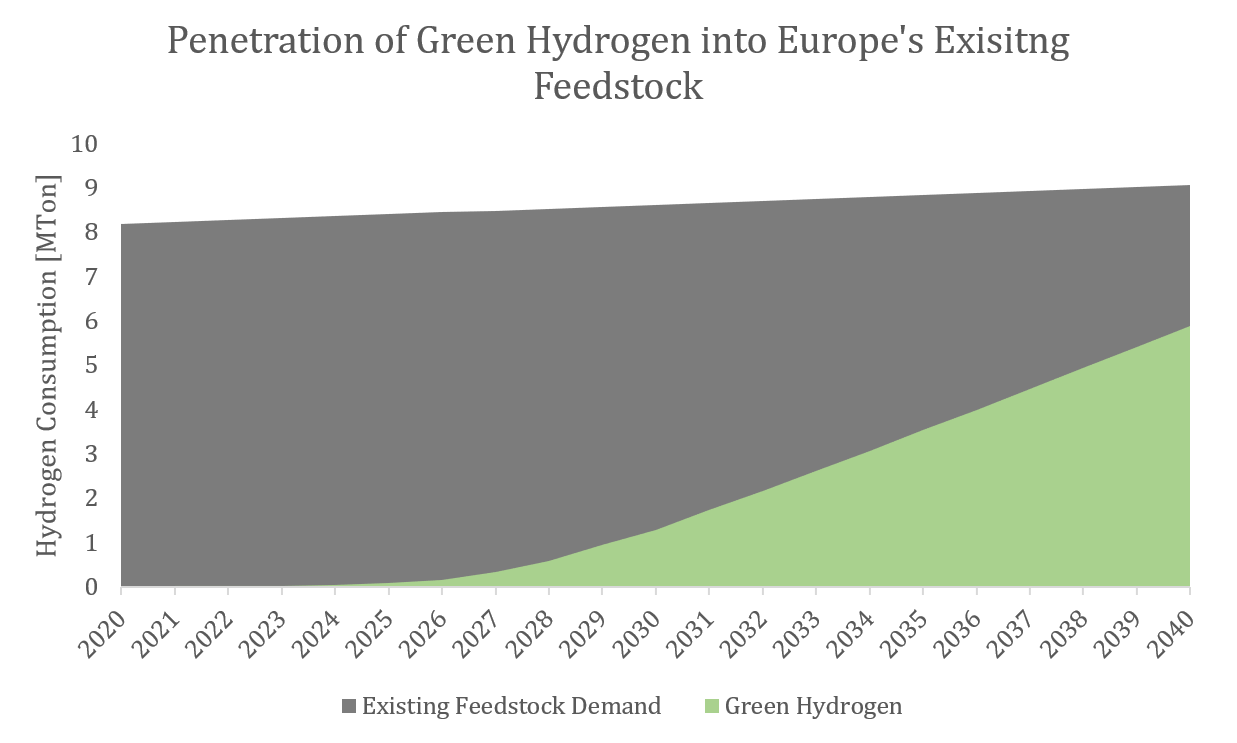 In this time, new sectors will have been adapted to run on hydrogen, with at least 90% of the feedstocks coming from renewable resources. The steel sector for example, is likely to adopt a hydrogen compatible process for the direct reduction of Iron, which uses around 50 kg of hydrogen per ton of crude steel. With European steel production likely to reach around 200 million tons over the coming decades, crude steel production with hydrogen as a feedstock could cover over a third of the sector by 2040.

Similarly, in the production of Kerosene and Diesel through the Fischer Tropsch process 1 ton of kerosene (plus 0.7 tons of diesel) can be produced with 0.3 tons of hydrogen as a feedstock, which will add more than 4 Megatons of demand for green hydrogen in Europe by 2040.

What this really demonstrates is that the market potential for green hydrogen in industrial feedstocks is a zero-risk move, especially once green hydrogen reaches parity in 2025. If Iberdrola, or anyone else for that matter, can establish themselves as an indispensable player in the industry, much as Tesla has in EVs, stock prices will soar. 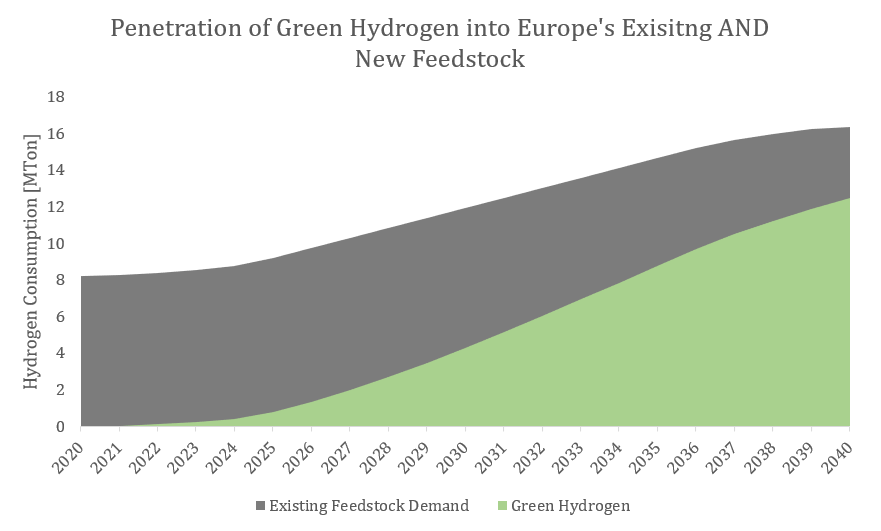