South Korea’s 5G launches have certainly been the gold standard in the very limited field of large-scale deployers so far. The country hit 2m subscribers to its three MNOs’ new services within four months of launch and the network has generally delivered high speeds and high usage levels.

However, every early deployment has its teething troubles, and in South Korea, these are related to the Non-Standalone nature of the networks (which suggests the same issues may affect other MNOs, since every one has chosen an NSA route at first). When the connection has to switch from LTE to 5G, there is significant impact on latency and therefore response times and speeds, according to a detailed study by RootMetrics, the testing company which also provides analysis of operators’ network performance in many countries including Korea.

This “upswitching” from LTE to 5G plays a big role in the overall user experience, says the report, which is significant in a country where expectations of that experience are among the highest in the world.

“The best end user download latency experience could be delivered not necessarily by the operator that offers the best pure 5G performance but by the network that most efficiently handles upswitching,” authors Suzanth Subramaniyan and Patrick Linder wrote. The need to upswitch from LTE to 5G raised KT’s initial 5G latency from 88ms, where LTE was not involved, to 244ms.

According to the study, South Korean 5G customers are often left on LTE by default, even if they are in range of a 5G signal, because LTE is better for device battery life and voice call performance, and so may be prioritized by the MNO (there is no voice over 5G capability yet so voice calls must fall back to 4G VoLTE anyway). When users are on LTE, they must upswitch to 5G to conduct a 5G data session, and that is what causes the increase in latency and response time, at least at the beginning of the task.

“As long as upswitching is necessary, download latency will be affected at the beginning of that task,” RootMetrics says. “Moreover, the more that 5G latency improves, the greater the impact of this need to upswitch: the closer that 5G response times come to being nearly instantaneous, the more significant the impact of delays needed for upswitching.”

The way to ensure that applications, such as virtual reality gaming, which have very low latency requirements, deliver good performance, is therefore for the MNO to set priorities so that those types of tasks always begin on 5G and take place on a continuous 5G data session.

The contrast is seen in the Figures below, with the difference between high latency at the start of a session where an upswitch is needed, and low latency throughout the session when it takes place on 5G from the beginning. 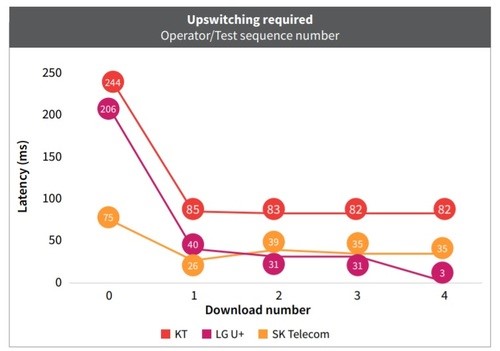 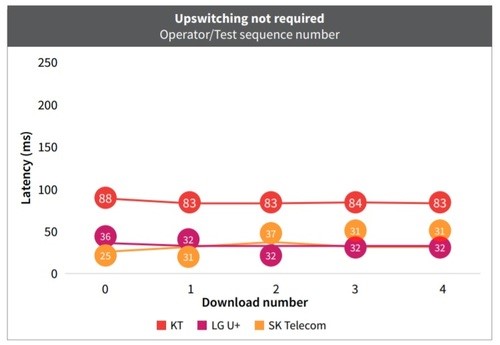 RootMetrics measured upswitching across the three active networks, run by SK Telecom, KT and LG U+. The last of these performed best, which the report speculated could be because of the settings and priorities it had defined, and/or the equipment it was using and how that was optimized for this issue. LG U+ is using Huawei equipment in the Seoul metro area and Nokia for other areas. Its larger rivals, KT and SK Telecom, are using a combination of Ericsson, Nokia and Samsung 5G networks.