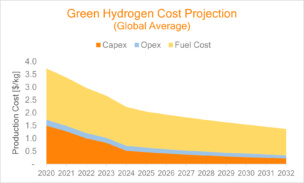 Elevated fossil fuel prices have left producers of ‘grey hydrogen’ exposed to skyrocketing costs, which are unlikely to come down until post-2024 – according to Rethink Energy’s latest natural gas outlook. Not only is green hydrogen from renewables already cost competitive with grey hydrogen, but it is now the only way we can expect to see hydrogen return to a cost of $1.50 per kilogram by 2030.

Russia’s invasion of Ukraine, and the subsequent geopolitical turmoil across the world, has driven gas prices up more than 300% since the start of this year. For producers of grey hydrogen using stream methane reforming, with 44 kWh of natural gas is required for every kilogram of hydrogen produced, costs now sit at $3.30 per kilogram of hydrogen.

With $3.70 per kilogram already achievable for green hydrogen, the benchmark has been raised from the $1.50 per kilogram benchmark for it to displace grey hydrogen from existing applications. By the time gas prices start to fall in 2024, plummeting costs of renewable energy and electrolysis units will mean that green hydrogen will be cheaper across the board.

With grey hydrogen becoming exposed to carbon pricing, the only way we’ll see hydrogen return to the $1.50 per kilogram levels seen before Russia’s invasion, will be through green hydrogen.

However, there are many out there that are doubting green hydrogen’s ability to reach this price. Critics are largely those working on battery technologies or ‘sustainable fuels,’ as well as those pushing ‘blue hydrogen’ solutions using carbon capture, fearful of the disruption green hydrogen will have on their industries.

To calculate the cost – and the projected future costs – of both grey and green hydrogen production, project costs need to be broken down into their initial capital requirements; ongoing maintenance costs; and fuel costs.

For green hydrogen projects, Capex consists of the purchasing and installations costs of the selected electrolyzer technology (alkaline, PEM, SOE). Given the potential to decentralize production, upstream auxiliary services – such water treatment or cooling – have been included within fuel costs. Downstream services such as hydrogen storage or distribution have been excluded, although will be reviewed in an upcoming research paper from Rethink Energy in the next two weeks.

The cost of installation – given in dollars per kilowatt – is dominated by the cost of the electrolyzer stack itself. Leading manufacturers currently provide systems at a cost of around between $650 and $900 per kW. Other components, amounting to approximately 45% of total system Capex, include those associated with plant balancing (drier, cooler, de-oxo, de-ionization), civil works, and electricity grid connection.

This gives an overall system Capex that can vary from $1,000 and $1,400 per kw. This is a cost that has fallen significantly over the past few years, but it’s worth noting that electrolyzers are still very early within their cost curve: total installed capacity sits at just 300 MW, while the global project pipeline is more than 1,000-times larger.

As outlined in Rethink’s latest research paper, manufacturers across the world are set to scale their production capacity to more than 100 GW of electrolyzers per year by 2030 – up from just 2 GW today. These new facilities will continue to drive competition and economies of scale within the industry, driving a huge reduction in cost.

Even without any sudden disruptions in technology – of which several of almost certain – Rethink Energy predicts a learning rate for electrolyzer modules of 11%. This means that every time global installed capacity doubles, Capex will fall by 11%. By 2030, system Capex will have fallen to just $340 per kW.

It’s worth noting that this is a conservative estimate. Learning rates for solar PV have been as high as 23% over the past decades, followed by Lithium-Ion batteries (19%), and even wind turbines (15%). Electrolyzers, of all kinds, are far easier to commodify.

Electrolyzer manufacturers are on track to hit this mammoth cost reduction. Enapter is expecting to see the cost of its anion-exchange membrane machines fall by 83.5% to $550 per kW by 2025. Nel is similarly expecting to see a 75% cost reduction in its more mature alkaline electrolyzers when its new automated factory in Norway is fully inaugurated.

From an operational standpoint, variable Opex costs typically refer to annuitized stack replacement costs, with electrolyzer modules needing to be replaced every 7 to 11 years in projects of different technology type, over a lifetime of around 20 years. Fixed Opex refers to costs associated with direct labor, general overheads, taxes, and maintenance.

Currently, these costs account for just 1% of Capex on annual basis, amounting to just 6% of the total production cost for green hydrogen. However, while there will be some improvements in system durability, and some extension to overall project lifetime (to approximately 22 years), annual Opex costs will rise to around 2.5% of initial Capex by 2030. The overall Opex cost per kilogram of production, however, will fall by around 39%.

Each kW of electrolysis capacity – operating at average efficiencies of 75% – can produce an average of 21 kilograms of hydrogen for every megawatt hour of electricity provided. This will rise marginally to around 22 kilograms as the efficiency of electrolyzers is pushed up to around 77% by 2030. Several companies, including those like Hysata, are expected to bring technologies to market with efficiencies that are far beyond this.

In terms of the electricity provided, while many electrolyzer projects will be driven by undisrupted supplies of renewable energy and power storage, our conservative approach to modelling assumes a hybrid of wind plus solar. In operation, these are expected to have a load factor of 26%, rising to 30% as hybrid projects become more efficient and include a larger amount of battery storage to maximize utilization.

With all of these improvements considered, each kW of production capacity is expected to yield 58 kilograms of hydrogen per year, with a lifetime production of 1.27 tons.

Predicated on renewable energy resources, through long-term PPAs, the expected price of this fuel supply is expected to fall from $32 per MWh to $20 per MWh by 2030 on average. For water, of which between 13 and 14 liters is required for each ton of hydrogen produced, costs – including treatment – are expected to remain fairly consisted at around 2 cents per liter.

Combining these, fuel costs – dominated by electricity – currently account for $1.8 for every kilogram of hydrogen produced. Efficiency gains will see this fall to just $1.1 by the end of the decade. However, as Capex will account for the largest share of cost reductions, fuel costs will grow to account for three quarters of the cost of green hydrogen production, up from just over 50% today.