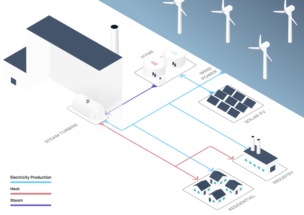 Hyme Energy, a Danish thermal energy storage company whose technology is based on molten salts, has agreed to deploy its system in 2024 in Rønne, the main city of the Danish energy island, Bornholm. This will be the first deployment of Hyme Energy’s technology as part of the operation of a combined heat and power plant.

The plant will have a storage capacity of up to 20MWh and will output around 1MW through heat, power and auxiliary services for the grid. Although official figures haven’t been made public, the project will benefit from the financial support of the EU through the Horizon Europe program, a research and innovation program which runs until 2027, with a budget in the billions of Euros.

The Bornholm energy island, located in the Baltic Sea, will be operated by Denmark, Germany, Poland and Sweden and has a 2030 starting target capacity of 3.8GW. All of this will come from offshore wind farms located in the Baltic Sea. The concept of an energy island is straight forward. The wind farms are only connected to the island, which represents a central hub, from which transmission lines span towards the land, providing electricity to the operating countries, streamlining the transmission system and providing energy links between neighbouring countries.

In the case of the Bornholm energy island, molten salt is a perfect addition to any future potential offshore/decentralized electrolysis plants because hydrogen is not yet a perfect substitute for natural gas powered heating systems – boilers.

Hyme’s plan is to make use of outdated fossil-fuel plants and their million-dollar assets (existing turbines and transformer units), and to repurpose these heat and power plants to house energy storage systems. Hyme claims that this approach would make the transition of the energy sector less costly, save resources, and allow traditional combined heat and power plants to continue playing an important role in stabilizing the grid.

Hyme’s system will utilise molten hydroxide salts, technology which it borrowed from its sister company in the nuclear sector which allows their highly corrosive nature to be controlled during high-temperature storage applications. Hydroxide salts are also about ten times cheaper than commonly used nitrate salts, more abundant since they can be sourced as a by-product from seawater and non-toxic, according to the Danish company.

Hyme sees the 2024 project as a stepping stone towards GWh-scale deployments linked to large-scale renewable energy sources such as offshore wind.

Ask Løvschall-Jensen, the company’s CEO, suggests that the technology is most suitable for the 6-24 hours duration and boasts a 90% round trip efficiency (for heat, although not for electricity) with operating temperatures of up to 700℃.

Molten salt storage solutions are also being looked at by China. More on the country’s plans can be discovered here. 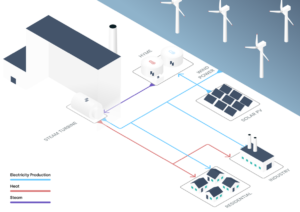